More Than Just I: Lou Reed's BERLIN at Forty

"He could have made Transformer 2, Transformer 3, "Walk on the Wilder Side", Walk on the Not so Wild Side" but, instead, he elects to take one of the bravest steps I've ever seen, in pop music history anyway, and he goes out to make a seminal work that digs deeper inside the soul of the artist than any other work that had been released, certainly into the American music scene, in fifty years."
-Bob Ezrin, Producer- 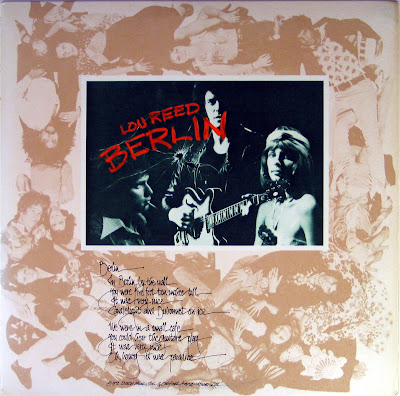 Before I ever heard Berlin I had read it.  It was the fall of 1989 and I had just begun my sophomore year at Castle High School in Newburgh, Indiana.  My life had been forever altered a year or so previously when I had found Lou Reed's 1980 LP Growing up in Public in my dad's record collection and since then I had totally immersed myself in every Lou related recording, book and article I could get my hands on.  These were the days before the internet made everything so readily available and, while nearby Evansville had several solid record stores, I had been unable to track down Lou's 1973 concept album Berlin.  Finally, hoping it would push my family forward into the CD generation, I picked up a copy of Berlin and Deborah Harry's Def, Dumb and Blonde on disc at Evansville's long since vanished Track Records before we even had a CD-player.  With no way to play to play the disc I only had the booklet and lyrics to obsess over.  Early in that school year I would keep a copy of that Berlin booklet in my school folder and I immersed myself in Reed's dark tale of the doomed lovers Jim and Caroline like the great literary work it was at its core.  By the time I finally heard the time the album, later that year at a friends house who had gotten a CD player before me, I already knew all the lyrics by heart. 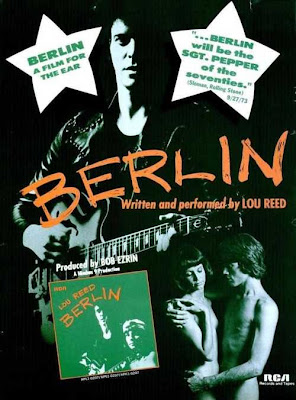 Berlin isn't my favorite Lou Reed album, that distinction belongs to 1979's The Bells, but to deny that it is among the most important works in his collection would be extremely misguided.  Released forty years ago this month, Berlin remains one of bravest, most inspired, most influential and most daring recordings of the seventies.  It is an album that has inspired a countless number of artists from David Bowie to Bat for Lashes and it foreshadowed the post-punk movement by nearly a decade.  As popular music becomes more and shallow, plastic and unnecessary Lou Reed's epic tale of abuse, addiction, redemption and romance becomes more resonate and more mythic with each passing year.  I can't imagine my world without it and when I listen to it today it still infuses me with the same kind of passion and intensity it inspired in me more than twenty years ago when I first heard it.

Critic Michael Hill pointed out in the liner notes that graced the 1998 remaster of Berlin that even though while rock listeners in 1973 were, "primed for a masterwork", Reed's album was, "met with confusion, revulsion and anger" upon its initial release.  Reed had scored an worldwide smash a year before with the David Bowie and Mick Ronson produced Transformer and, despite that fact that Rolling Stone predicted that Berlin would be "the Sgt.Pepper of the Seventies", the collection was indeed mostly greeted with indifference or outright hostility.  It was the most grown-up album rock music had ever seen and most were simply not prepared for it.

Before the days of downloads and streaming, the first thing a listener would have taken in upon getting an album would be the sleeve.  The original LP of Berlin just feels HEAVY.  A gatefold with a pull-out booklet, Berlin was graced with a beguiling and mysterious design by Pacific Eye and Ear and featured a number of haunting Saint-Jivago Desanges photos.  Reed himself appears on the cover of this incredibly cinematic collection armed with a guitar and a look that could cut through steel.  As David Fricke of Rolling Stone would point out in the 1998 documentary Rock and Roll Heart, while other popular artists of the day were making records of the time Reed was making records, "of his time" and you can just feel the absolute audacity of Berlin before the needle even drops.

Despite the fact that Berlin is one of the most cohesive concept albums ever made a number of its tracks had been recorded previously by Lou as far back as the mid-sixties.  Early versions of "Men of Good Fortune", "Caroline Says", "Oh Jim" and "Sad Song" had all been worked on by The Velvet Underground and an extended version of the haunting title-track had appeared on Lou's self-titled debut lp a couple of years previously. 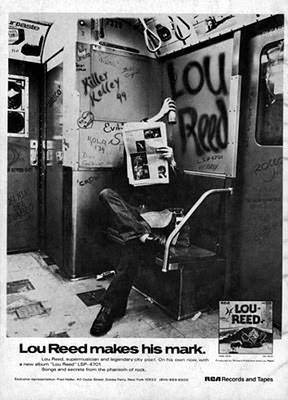 Certainly Lou's personal and professional relationship with Nico had informed the album as well.  Nico would later claim that Lou, "wrote me letters saying Berlin was me."  The album would really be a tribute to Lou Reed's literary background and his dedication to writers like Delmore Schwartz, Hubert Selby and Raymond Chandler.  Berlin would represent Lou's goal of presenting characters as sharply-drawn and well-rounded as those artistic mentors in the medium he was working with in 1973.  Reed would state that, "the real important thing is the relationship between the two major characters" and, "the narrator is filling you in from his point of view, and his point of view is not particularly pleasant."

The behind the scenes tales of Berlin are as legendary as the album itself.  Berlin's brilliant producer Bob Ezrin discovered heroin while recording the lp and suffered a, "chemical breakdown", upon completing it.  He recalled that, "we were all seriously ill" and that Berlin, "put me out of commission for quite a while."  Reed recalled that, "we killed ourselves psychologically on that album", and that they had, "went so far into it that it was kind of hard to get out." 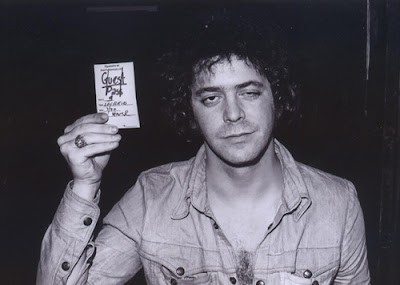 Berlin is indeed one of the most damaging listens in all of popular music.  From the mysterious distant echoes of the riotous birthday celebration that opens the album to the remarkable string section that closes it (a string section Ezrin would later revisit on Pink Floyd's The Wall) Berlin is an unbelievably intense work that never lets up its incredibly tight grip.  Lester Bangs would famously call it, "a gargantuan slab of maggoty rancor that may well be the most depressed album ever made" in the pages of Creem a couple of years after Berlin originally shocked listeners who dared to take its ominous journey.

Reed and Ezrin created Berlin utilizing the largest cast of supporting players that Reed would ever work with.  Everyone from famed jazz musician Michael Brecker to Cream co-founder Jack Bruce to legendary Traffic leader Steve Winwood makes a contribution.  It's ironic that a recording that sounds as unbelievably out of step and isolated as Berlin had so many well-known hands in the mix.  Reed was thrilled with the results and he would state in early 1976 that Ezrin, "did a great job" and in fact, "everybody on that album did a great job."  While all the supporting players are indeed fine Berlin's shining stars are ultimately Reed (whose nearly always underrated vocal stylings have never been quite as effective and sinister as they are here), Ezrin (nobody produces with this kind of passion anymore) Dick Wagner and Steve Hunter (whose ferocious dueling electric guitar playing remains an absolute highlight). 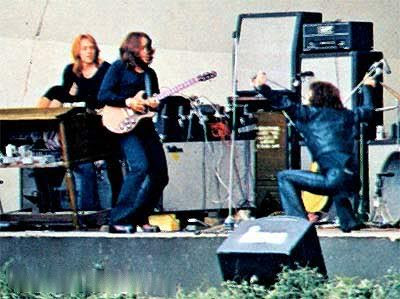 While Reed's lyrics for Berlin have been rightly celebrated time and time again one of the great things about it, that isn't stated enough, is just how well-played and produced it is.  It's a record that influenced generations of musicians and yet there still isn't anything that sounds quite like it. 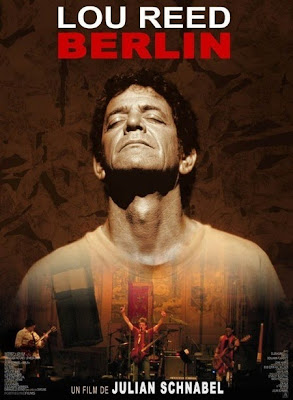 Years before the great Julian Schnabel finally made Berlin into a film cinematic connections were already being made.  One of the artists most effected by the album was legendary Kraftwerk co-founder Florian Schneider, who would mention in 1975 that he felt, "Berlin is projecting the situation of a spy film, the spy standing in the fog smoking his cigarette."  Lou would say of the album in 1977 that Berlin, "was a movie in sound" and by 1979 he admitted that he would, "love to see Polanski make a movie" of it.

Polanski never did make that movie but when Schnabel and Reed triumphantly revisited Berlin on stage and on film in 2008 it was fitting that it was Polanski's greatest creative and real-life muse Emmanuelle Seigner who would finally so brilliantly bring tragic Caroline to life. 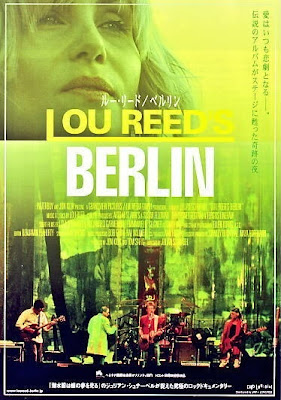 Who exactly Caroline was based on has been conjectured about for years.  Was it Nico?  Was it Reed's wife at the time Bettye Kronstadt?  Author Chris Roberts likely nailed it in his mostly disappointing Walk on the Wild Side: The Stories Behind the Songs that, "Caroline is a composite", that, "manifests as a fevered brew of vulnerability, paranoia, suffering and bullying."  She is certainly one of the most unforgettable characters in rock history and she inspired some of the most penetrating a memorable lyrics of Lou Reed's career.  Reed's understanding of the importance and power of the lyrics he penned for Berlin led him to reproduce them for the first time with an album.  He would later recall that even though, "people don't deserve good lyrics because they never listen to them" he chose to have them printed with Berlin.  Like the music they took rock to that very adult level Lou had been striving for since he first played John Cale an early version of "Heroin" in the mid-sixties.  Reed would state in 1976 that, "Berlin was an album for adults", and, "the whole thing started because (he) wanted to write songs about something that was relevant." 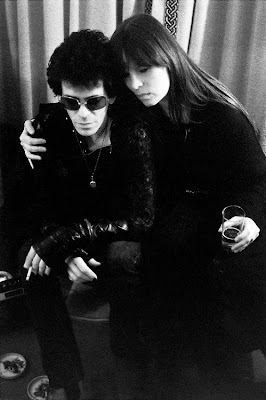 Berlin is indeed relevant.  It isn't a stretch to say that without it the course of popular music would have been much different.  Would we have a Low, Lust for Life, Dub Housing, Metal Box, Psychocandy, Daydream Nation or Kid A without Berlin?  Perhaps but I doubt any of those albums would have sounded quite the same without Reed's visionary recording.  Lou Reed's pulverizing portrait of a lost couple in a divided city, he had never even visited before recording, had an effect that went beyond critical acclaim or mass commercial acceptance (although time often forgets it remarkably went Top Ten in the UK).  Berlin has never been an album for all tastes but those who are touched by it are never quite the same...

I was two months old when Berlin was released in the summer of 1973.  It's strange for me these four decades later to picture Lou Reed and Bob Ezrin finishing up touches on this piece of work, that would come to mean so much to my life, as I was first coming into this world.  While I am one of many who discovered Berlin in isolation an odd community has formed around the album.  While it is too corrosive and dark to take its deserved place among rock music's most celebrated albums, this community that holds Berlin close to their hearts share a special bond and when we pass down the sometimes ominous and dark corners of our lives we can greet each other with a knowing nod and understand, as Reed so eloquently wrote, that we are indeed "more than just I".

The quotes for this piece were taken from the American Masters documentary Rock and Roll Heart and the books Beyond the Velvet Underground by Dave Thompson, Lou Reed Between the Line by Michael Wrenn and Walk on the Wild Side:  Lou Reed The Stories Behind the Songs by Chris Roberts.
Posted by Nostalgia Kinky at 12:31 PM 3 comments