Joe Dallesandro on Film: The Climber 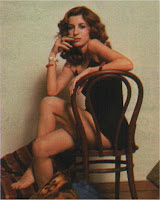 Since the advent of DVD my days of obsessively collecting grey market dubs of unreleased films has calmed down considerable. It has been hard enough to keep with the number of European films released legitimately on DVD in the past decade but occasionally though I will come across an unreleased film that I have wanted to see and order it from any number of genre loving vendors.
I must admit there was a certain excitement in waiting for my copy of Pasquale Squitieri's 1975 film L'AMBIZIOSO otherwise known as AMBITIOUS or THE CLIMBER. This prime slice of seventies Eurotrash stars two of my favorites Joe Dallesandro and Stefania Casini so I couldn't pass up a copy when it appeared on ebay. Receiving my package reminded me of the old days when getting boxes of unseen delights from the likes of European Trash Cinema, Midnight Video or Video Search Of Miami would make my week.
It is no surprise that the best thing about THE CLIMBER is its cast. Dallesandro and Casini are two of the most beautiful people I have ever seen and they are in their prime here. They were also a couple at the time and that lends their scenes together something a little special. Dallesandro is exceptional in this film, it's rumored to be one of his favorites and he turns in a fine performance as a young thug on the rise in the Italian underworld. Little Joe was on a roll in this period as he was preparing to shoot two absolutely astonishing films, Louis Malle's BLACK MOON and Walerian Borowczyk's LA MARGE. Casini is good in everything she appears in and this film is no exception. She is completely believable as the woman who falls in love with and is ultimately destroyed by the criminal lifestyle.
Squitieri made a series of these Italian crime films in the early to mid seventies and his direction is pretty sharp here. This is by no means a great film but it's an entertaining one. Squitieri also turns in a few surprising moments including a brutal and prolonged stabbing scene and a very odd, and surprisingly moving, final five minutes.
The film doesn't skimp on the violence with lots of gunplay and squibs. Franco Campanino turns in a varied and solid score that swings between hard rock and more lyrical orchestrated pieces. Cinematographer Eugenio Bentivoglio gives the film a suitably grimy palate and would work with Squitieri on several films before and after this.
The version I watched is the full uncut 102 minute print with all of the violence and nudity intact. It comes from a rare Greek full frame VHS and is dubbed in English. The print is faded and very dark in spots but as of right now it is the best and most complete version out there.
THE CLIMBER isn't among the best Italian crime films of the seventies but it is a solid entry and would make a fine selection for a DVD release from a company like No Shame or Severin.
at March 25, 2007

I haven't seen this film and it sounds really interesting. Thanks for sharing your write-up about it. I wish more of Dallesandro's eurofilms were easily available on DVD.

I agree about Joe's films. He made some really interesting films in Europe in this period. I'm glad to see that Malles Black Moon has begun to pop up on American tv in the past couple of years and The Gardener has been released on disc but most are very hard to find.
Borowczyk's La Marge is my favorite of these but obviously the film he made with Serge Gainsbourg and Jane Birkin screams for a deluxe release. He also made one with Maria Schneider which I am dying to see but it is extremely hard to locate....thanks as always for your comments.

I watched this film yesterday for the first time and i must say i was VERY surprised (or should i say SHOCKED?) by the fact that Joe Dallesandro could act!!! I must say this is one of his best performances EVER. This man is totally gorgeous, sooo unbelievably beautiful but i always thought he couldn't act to save his life. Now, i must admit i was wrong. He can act when he wants to. Or maybe it depends on the director who can make him act properly (well, most of them failed).
This film is both entertaining and captivating. The storyline is very interesting, even though there are many other movies with similar storylines. I just love how Aldo (Joe) completely lacks remorse, empathy or guilt. All he wants is to climb to the top of the mafia world. Great movie all around.