The film world has lost yet another great director as it has been reported that Curtis Harrington has passed away at the age of 78. Tim Lucas over at VideoWatchblog has posted a very moving tribute to the man that I recommend for everyone to read. I can only add that I liked this man's films and tv work very much and that he will be much missed by film fans everywhere.
Harrington was able to bring style and class to films that might have just been campy in lesser hands such as DEVIL DOG HOUND OF HELL or the two great Shelley Winters films he made in 71, WHOEVER SLEW AUNTIE ROO and WHAT'S THE MATTER WITH HELEN. His fine touch is even felt in a film that was taken away from him and ruined like MATA HARI.
Harrington was also a talented critic and accomplished writer as well as an actor who appeared in works by Kenneth Anger and Orson Welles among others.
His finest films for me are the astonishing NIGHT TIDE from 1961 and the unforgettable RUBY from 1977. I'm also extremely fond of the tv film he made with Anthony Perkins in 1970 under the great title HOW AWFUL ABOUT ALLAN.
Below are three links featuring interviews with Curtis on his varied career as an actor, critic and film/tv director. Best wishes to his family and friends, he was a fine and stylish director whose work will be remembered for generations to come. 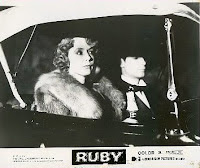 This is depressing news. I'm sort of becoming numb to all the deaths lately of filmmakers, actors, writers, etc. It's making me feel really old seeing so many people I admire pass away. I'm not looking forward to my 39th bday this year.

I know what you mean Kimberly. I turn 34 tomorrow and it is very depressing seeing these filmmakers I admire so much passing on. The death of Adrienne Shelly really hit me hard last year and it seems like since then that it has just been director after director. It makes me very sad to think in the next decade or so about how many we can lose....ugh...
thanks as always for your comments....Harrington was great

Just wanted to wish a happy birthday Jeremy! I hope you enjoy yourself tomorrow. Do you have any special plans?

Thanks Kimberly,
I appreciate that. No plans, I work all day but I am happy to report that my finals are over so I am planning on enjoying the time off from school...for the three weeks until my Summer class starts...
Thanks again for the birthday wish...that's very nice of you.