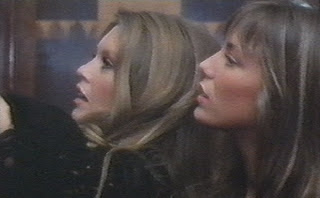 Jane Birkin and Brigitte Bardot's names are forever linked due to Serge Gainsbourg's JE T'AIME...MOI NON PLUS but unfortunately they only appeared in one film together. Jane was 27 and Bardot had just turned 39 when Roger Vadim's DON JUAN (DON JUAN 73, IF DON JUAN WERE A WOMEN) hit theaters. It would turn out to the final leading role for the legendary Bardot and would open to mostly poor reviews and a slim box office take in late 1973. The film, while not any of the players or director's finest, has surprisingly aged well and the dvd of it features a fine widescreen presentation that remains a great site after years of horribly cropped VHS releases.
While the film's most infamous scene features a rather tame encounter between Bardot and Birkin in bed together I am much fonder of the all too brief moments they shared throughout the rest of the film.

There are much better films to see with these two great icons, but Vadim's DON JUAN will always remain special for the moments when the woman who inspired JE T'AIME...MOI NON PLUS and the woman who made it a legend appear on the screen together. 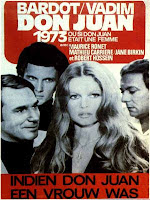 I've been a big fan of Bardot for years. I've had a thing for her since I was very young and discovered all these sexy stars of the 1960's. It's only been in recent times that I discovered who Jane Birkin is. I fell for her as well. One thing was that song. I can't get it out of my head. It's such a beautiful song. It's very sexy and I don't understand a lick of French. I do think it's cool that these two both had done this song with Serge. I do prefer Jane's version though. I've never seen "Don Juan" before. I had heard it wasn't that great of a film. I haven't seen many Roger Vadim films that were though. I know you always hear about the scene between Brigitte and Jane. I do want to see this movie, even if it's just to see these two beautiful women in a movie together. I definitely plan on getting this one soon. Great blog. I love these Mondays with Jane Birkin. It helps brighten up what is otherwise usually a not great day.

Don Juan isn't one of Vadim's best but it is still well worth seeking out. Get the dvd if possible as most of the videos are eyesores.
I like Jane's version of the song
the best but I think Bardot's is really great also. They have a very different feel about them.
Glad you are enjoying the Jane Mondays...they are fun to do and are making my least favorite day a bit brighter also...as always thanks for commenting