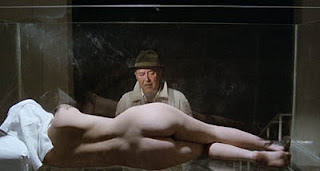 Flavio Mogherini started out his career in the late 40's as a production designer for numerous Italian films. He continued his career through the fifties and sixties as a production designer on many other works as well as an art and set director and costume designer.
Throughout the early days of his career he worked with many notable directors including Pasolini, Campanile, and Mario Bava. He turned to writing and directing in 1972 at the age of fifty with ANCHE SE VOLESSI LAVORARE, CHE FACCIO, which featured Barbara Bouchet. He had a hit with the Marcello Mastroianni 1976 film LUNATICS AND LOVERS and would direct a handful of films after this before passing away at the age of 72 in 1994. Along with his fine work as an art director with some of Italian cinema's finest directors, Mogherini will probably be remembered mostly for his bizarre and striking 1977 thriller, THE PYJAMA GIRL CASE or THE CASE OF THE GIRL IN THE YELLOW PYJAMAS. 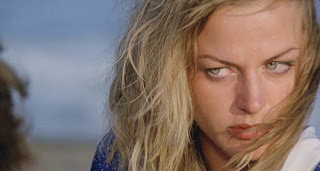 Yellow is a key word in discussing this film for two reasons. The color yellow plays a huge role in as it clues in the audience early on that this seemingly conventional film is anything but, that this traditional murder and police investigation story is actually one of the most clever non-linear art films of the seventies. Yellow is also the color often associated with the Italian Giallo, which this film is often grouped into. Whether or not it should be labeled a giallo is up to the viewer as it does have elements of the genre but more often than not it is completely uncharacteristic of it.
THE PYJAMA GIRL CASE was inspired loosely by a real life 1934 murder of Linda Agostini, whose only identifiable feature were her silk pyjamas. Mogherini's film takes this tragic true event and uses it as a spring board for one of seventies cinema's oddest creations.

Working from his own script, Mogherini fashions two seemingly non connected stories following the haunting opening sequence where the badly burned body of a female is discovered by a child on a beach. One story is of Police Inspector Thompson, played by the amazing Ray Milland, who is investigating the mysterious murder. The other story tells of a lonely young woman, played by the underrated Dalila Di Lazzaro, who is going through a series of frustrating and increasingly empty love affairs. Through the first forth of the film the audience follows the two stories along until, through a series of very subtle clues, we realize that the girl is actually the murder victim from the beginning of the film, and Mogherini has been presenting the audience with a most clever twist on the traditional use of the flashback.
I have talked to a few people who have seen this film and some don't like that Mogherini is letting her back story play out at the same time we are seeing the investigation into her death, but to me it gives the film an incredible emotional pull that simply isn't in most thrillers from this period. Had Mogherini told the film chronologically, or used a traditional flashback technique, the film would lose much of its power. Many audience members don't like even the suggestion that they are in any way being manipulated and tricked but Mogherini's carefully crafted film has a reason for its startling structure, Lazzaro's life IS Milland's investigation. More than searching for a murderer, Milland is looking to give this unknown victim her identity back.
Academy Award winner Milland was nearing the end of his big screen career with THE PYJAMA GIRL CASE, and he would pass away just a decade later with an impressive and varied career under his belt. His role as the aging and undermined Inspector in Mogherini's film is among his most undervalued performances. It is a work of great empathy and at times sly comic moments; how seriously Milland might have taken this role I don't know but he plays it out beautifully. It is interesting to note similarities between this role and Max Von Sydow's character in Dario Argento's recent SLEEPLESS, another aging past his prime inspector seemingly left on his own to solve a case.
The cast also includes Mel Ferrer as Lazzaro's oldest and richest lover, and he is great at presenting a slightly seedy character that we know will abandon her, like everyone else in her life seems to. Michele Placido and Howard Ross also turn in fine performances as men in Lazzaro's increasingly out of control love life.

Lazzaro was an Italian fashion model in the late sixties who had made a few films before her memorable work in Paul Morrissey's FLESH FOR FRANKENSTEIN. Often overlooked as one of the great beauties of the seventies Lazzarao turns in her finest work as an actress in Mogherini's film as the his title character. She is really wonderful in the film at conveying a sense of loss and lonliness in this character. She actually plays her final moments in the film so well that I find thes scenes to be among the hardest to watch in any Italian genre film. Lazzaro made many films before and after PYJAMA GIRL CASE but it remains her greatest and most complex role. Key among the film's assets is the score by Riz Ortolani featuring songs by Amanda Lear. One of the most unique of all of Ortolani's work that at times sounds like a cross between Kraftwerk and Throbbing Gristle, it remains a dividing point to fans of the great Ortolani. The soundtrack album is one of my favorites of the seventies but many people can't tolerate it's odd swings of electronica and sweeping orchestrations. Lear's work on the title track and LOOK AT HER DANCING are equally mesmerizing and play in the film incredibly well.

I first heard about Mogherini's film from Craig Ledbetter's special Giallo European Trash Cinema issue in the mid 90s. Ledbetter's rave review of the film caused me to seek out the only uncut version available at the time in the form of a poor quality full screen Greek vhs. The film was released in a better version by Redemption in England in the late 90s but it was hampered by a poor muffled soundtrack. THE PYJAMA GIRL CASE finally received a definitive presentation a couple of years ago through William Lustig's Blue Underground and this is the version to seek out. Featuring a beautiful widescreen uncut transfer and an interesting documentary on the true life case, this disc is a beauty. It would have been nice to have some additional supplemental material related directly to the film but still the disc is the best presentation the film has ever had.
THE PYJAMA GIRL CASE seems to polarize Italian film buffs. People seem to absolutely love it or despise it. The unconventional narrative of the film bother some people and others seemed turned off by just how untypical it is for a Giallo, if it can really be labeled that at all. Once about 8 years ago I traded a copy with someone for another rare film only to have him label the film misogynistic and confusing. I have read the misogynistic claim before but just don't buy into it. Mogherini makes the Lazzaro character extremely sympathetic and presents her section of the film from her viewpoint, the twisted and cruel characteristics of the male characters in this film should not be mistaken for Mogherini. 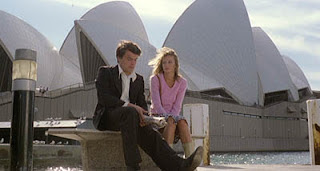 I highly recommend THE PYJAMA GIRL CASE for Italian film lovers as well as more adventurous film fans in general. It is a demanding film that asks much more than your average genre picture. The Blue Underground dvd is still available and can usually be found for around fifteen dollars. The incredible soundtrack has unfortunately never been given a cd release and original vinyl copies are hard to come by. It has been posted as a free download on several blogs in the past year and a simple search will bring its strange and numerous treasures to your ears.
Giallo, European Art Film or both? Whatever label you want to put on it Flavio Mogherini's searing PYJAMA GIRL CASE is unlike any other Italian genre film of the seventies, and that fact alone makes it absolutely essential.
at May 10, 2007

Terrific review Jeremy! The film had some great stuff in it and was beautifully shot, but I think you enjoyed it a bit more than I did.

I actually thought the story structure was one of the best things about the movie and I didn't find it misogynistic or confusing. The comedy bits are what didn't work for me and I had problems with some of the cast, including Milland, but I did like Dalila Di Lazzaro in the film.

As I said, I liked it but it didn't totally work for me. Reading your review made me want to watch it again though, so maybe my opinion will change about it. It's always nice to get a new persepctive on things.

Thanks Kimberly,
Funnily enough after I wrote this today I picked up the new Video Watchdog 130 at a local bookstore to find a review of it in there.
I think the main thing I like about the film, outside of Dalila, is its structure. I'm a sucker for non-linear narratives. I love hearing your thoughts on it, let me know if you ever re-visit it...thanks for the comments...

Hi, my friends, I just watched the trailer of this movie some months ago, I found it awesome! Especially the scene of the public display of the corpse... and I also like the soundtrack.
Best regards or Good luck! (as Ray Milland says) from Italy