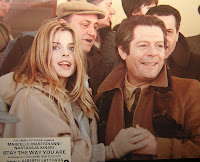 STAY AS YOU ARE is often an overlooked film in Nastassja's filmography and its current unavailability hasn't helped matters, but it remains the most important of her first four films. While not as good as Wender's THE WRONG MOVE, STAY AS YOU ARE offered Nastassja a solid leading role and showed that clearly when paired with a great actor, Nastassja could more than hold her own. 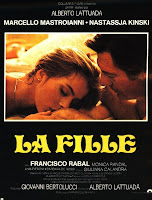 The film was a success throughout Europe and a minor success in America. Various poster designs exist for the film but for the most part they utilize the same shot of Nastassja and Marcello. This shot has also been used for the various home video releases.
The usual amount of worldwide press books and such sometimes pop up on Ebay as does the very desirable Morricone soundtrack album that I already covered. The film would reach some further notoriety when Playboy published some photos from some of the film's love scenes between Nastassja and Marcello. Both were bothered, and publicly addressed, by the fact that the shots taken out of context might just appear lewd to people who hadn't seen the film.

The most desirable souvenir one can get from STAY AS YOU ARE at this point is the film itself. Used copies are currently going for well over one hundred dollars at Amazon and I haven't come across an import dvd that features English subtitles or the dub track (although I would be grateful to have someone point one out to me).
STAY AS YOU ARE has been forgotten by many but it is a film well worth discovering. Nastassja would have very little time to look back though as she was getting ready to begin the journey to the performance and film that would suddenly transform her into one of the most talked about stars in the world. 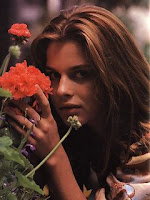 Email ThisBlogThis!Share to TwitterShare to FacebookShare to Pinterest
Labels: Nastassja Kinski, Odds and Ends, Stay as You Are