Even though they only made two films together, the names Robert Aldrich and Burt Reynolds fit very nicely together for me. Their brief, but very valuable, partnership came as Aldrich was nearing the end of his career and Burt was just taking off in his. It just took two films to establish a professional and creative relationship together that seemed to bring out the best in both of them. Since I count both of these films among my favorites of the seventies I thought I would pay a short, but no where near definitive, tribute to them. I hope to look at both of these two special films in much more detail later, just take this as my nod to a brief partnership that created two of my favorite decade's most memorable films.
The influential Aldrich had just wrapped the incredible EMPEROR OF THE NORTH (1973) with Lee Marvin when he began shooting the dark football comedy THE LONGEST YARD in 1974. THE LONGEST YARD was a bit of a departure, and simultaneously a return to his roots, for Aldrich as his previous few films had all been very action oriented.

Based on a story by producer Albert R. Ruddy with a script by Tracy Keenan Wynn, THE LONGEST YARD tells the story of a once great football player who is thrown into prison and is forced to form a prison team for an exhibition match with the guards.
In anybody else's hands besides Aldrich, THE LONGEST YARD could have turned out really unmemorable but he gives it a real lean and tough feel that is extremely hard to shake. Even in the film's funniest moments, there is still a pulverising hard edge to it that hits like a unbreakable rock.
Key to the success of THE LONGEST YARD was the casting. Loaded up with an astonishing group of supporting players including Eddie Albert, Ed Lauter, Michael Conrad and a young Bernadette Peters, the piece needed a leading man who could center the film with a funny yet emotionally satisfying performance. In Burt Reynolds, Robert Aldrich found not only the best man who could have played the once great but now disillusioned Paul Crewe, but I would argue the only one.
Burt Reynolds was already one of the biggest stars of the early seventies when he signed on for THE LONGEST YARD, but he was in need of a real critical success as he was getting more lumped in as just a regional action star. He had just had a big hit with WHITE LIGHTNING (1973) when he accepted the potentially career changing role as the defeated Crewe in Aldrich's film. The two of them working together created some real magic that no one could have predicted.
THE LONGEST YARD was, and remains, a hugely popular film and for me all of that rests on the great and exciting direction by Aldrich and the performance of Reynolds, who is just incredible in the film. Watching it today when so many star vehicles fall completely flat, Burt Reynolds in his prime is a reminder of a star who really could deliver the goods. His work is a tricky combination of cruelty and charisma, comedy and cynicism and finally respect and redemption. 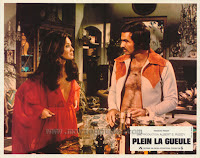 The film is filled with so many great moments that it is hard to choose just a couple. Certainly the opening scene, where Crewe has a vicious knockdown fight with his girlfriend and steals her car to the sounds of SATURDAY NIGHT SPECIAL, is quite unlike any other big Hollywood opening ever. Then of course there is the team and seeing them train, the Warden and finally the big game. Aldrich directs every scene with such gusto that it almost seems like he knew that he was nearing the end of his own professional, and indeed personal, game. For all its great moments though, my favorite is without a doubt the final huddle when all Crewe has left to give is a defiant nod to his team and a stirring, "Let's do it". It's one of those little lines, much like the "Why not?" that concludes THE WILD BUNCH, that still sends chills down the back of neck when I hear it.
THE LONGEST YARD would prove a major smash upon its release and make Burt Reynolds the biggest star of the seventies. It was a personal triumpth for GODFATHER producer Ruddy who had been told that the film wouldn't succeed, and it would prove one of Aldrich's major works. Its fast paced editing was nominated for an Oscar but Aldrich, Reynolds and the film were criminally ignored when the nominations were announced.

Aldrich and Reynolds had an open playing film in front of them after THE LONGEST YARD but the project they chose would surprise everyone. SAVE THE TIGER novelist Steve Shagan wrote CITY OF ANGELS as very much a continuation of TIGER'S themes of loneliness and disconnection from the modern world, only this time instead of a lost garment salesman Shagan focused on a disillusioned Los Angeles cop.
HUSTLE was recently honored by the great critic Kim Newman in Sight and Sound as one of seventy five great overlooked films and I wanted to applaud when I saw that he had chosen it. Long neglected and forgotten by many, HUSTLE has been a favorite of mine since I first saw it on late night tv as a teenager.
Reynolds stars this time as Lieutenant Phil Gaines, a displaced in time and place cop who has seen just a little too much corruption and dishonesty in his life. Gaines drinks too much, he is love with a high price hooker, dreams of going to Rome and imagines a slower life scored by the sounds of Artie Shaw. He is a dreamer and he likes to go out on his call girl Nicole's balcony with a drink in his hand and Charles Aznavour's YESTERDAY WHEN I WAS YOUNG in his head.

HUSTLE is very much a modern film noir, and I think along with Arthur Penn's monumental NIGHT MOVES and Robert Altman's glorious THE LONG GOODBYE, it is the best of the color noirs of the seventies. There is a murder, a mystery, some sleaze, some sex and a lot of corruption, but at the heart of HUSTLE is this lost guy that Reynolds inhabits completely with a sad haunted performance that is just about the best work of his career.
HUSTLE feels completely different from THE LONGEST YARD and it is pretty easy to see why audiences didn't go for it. It is a really dark and cold film and, even though just two years had passed since THE LONGEST YARD, it feels like a film made by two much older men.
Aldrich and Reynolds believed in HUSTLE so much that they formed their own joint company, RoBurt,to help produce it so its failure must have been pretty stinging to both. Watching it today shows a film that clearly isn't as perfect as THE LONGEST YARD but its imperfections play into it themes of a country past its prime perfectly. It is also easier to see now that Aldrich seemed to instinctively know that all of the major players in his cast, and indeed himself, were just slipping past their peaks, and it now feels like one of the most ideally cast films of the seventies.

Robert Aldrich only completed four more films in his distinguished career and he died at the age 66 in 1983. He left behind a rich and distinguished legacy that both THE LONGEST YARD and HUSTLE fit into nicely.
I have written a long tribute to Burt Reynolds before on here so regular readers will know the high regard I hold him in. THE LONGEST YARD and HUSTLE are two of his most important and greatest films and anyone who has ever thought of Burt Reynolds as just a simple good old boy should check out these out to see how complex and diverse he can be.
Both films are thankfully available on dvd. HUSTLE features a sparkling widescreen transfer but nothing else. THE LONGEST YARD is out in a great edition with documentaries and an unforgettable and essential commentary with Reynolds and Ruddy.
I love Robert Aldrich, Burt Reynolds and these two films. I wish they had made more together but these two were enough to make them one of the great creative partnerships of the seventies. 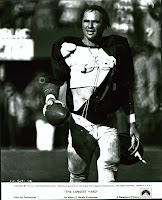 Hey Jeremy. I loved "The Longest Yard." It's one of my favorite movies that Burt Reynolds ever did. He did so many great ones in the 70's. The movie does have a wonderful supporting cast, but it is Reynolds that makes this film. He was at some of his best in this one. So what did you think of the remake with Adam Sandler?

A few months ago, I watched as many of Robert Aldrich's films that were currently available on DVD back-to-back. Flight of the Phoenix and The Longest Yard were the best of the lot. I also have a fondness for Emperor of the North Pole, even if it has flaws.

Hustle I really didn't care for. Reynolds was going through the motions, smirking and playing Burt Reynolds as opposed to a cop. The movie is so bitter - even for the mid 1970s - that it just ceased to be believable for me.

The original Longest Yard is fucking great and I enjoyed reading your tribute, Jeremy.

Thanks Keith,
We absolutely agree on the original. I still haven't seen the remake. I like Adam Sandler and will watch it eventually...what did you think?

Thanks Joe,
I appreciate your thoughts...I know that "Hustle" rubs a lot of people the wrong way. I always welcome differeing opinions on here so I appreciate the comments and I agree with your thoughts on those other Aldrich films....

Thanks to you both..

Hey Jeremy. I've actually not seen the remake. Not sure if I'm scared they messed up the original too much or what. I do like Sandler. I wasn't sure if you had seen it or not. Burt is the man though. He had so many good movies, such as this one, Cannonball Run, Smokey and the Bandit, Deliverance, etc.