I will be posting another look at Eli Roth's HOSTEL 2 to go along with this one soon. I did want to say though that the few problems I had with the film on my first viewing have pretty much disappeared. The film, as it plays in its striking uncut form on disc, gets better and better with each viewing, and it has quickly become one of my favorite horror films of the decade.
The DVD contains some solid special features that are entertaining as well as informative. Italian horror fans will absolutely want to check the disc out for a brief but beguiling interview with Edwige Fenech (and some shots of an awe struck Roth directing her), as well as an interesting short talk with Ruggero Deodato.
Even better is the producer's commentary with Roth and Tarantino that plays like a love letter to the Italian horror genre in general. After watching the film again and viewing the extras, I must say that it is indeed Sergio Martino's masterful TORSO that seems to be the film that HOSTEL TWO is most indebted to. Readers here will know that Martino's underrated Giallo is among my favorite films, and frankly seeing this much love thrown at it was refreshing to say the least. 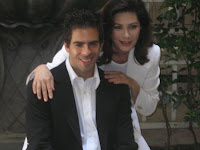 Here are two shots of Eli and Edwige from his MySpace page. Be on the lookout for a long review for this woefully underrated and unjustly maligned film here soon.
at October 30, 2007

Jeremy, you have me eager to see this. I finally got around to seeing the first HOSTEL just a couple months back and was shocked how mis-characterized the film has been since its original release. It certainly isn't a masterpiece, and I enjoy CABIN FEVER more, but also it isn't nearly the soul-less and sadistic train-wreck that I'd heard from reviewers and friends alike. It was a fun little exploitation movie. My only real complaint is that I do wish he'd tone down on the cameos and homages to other better films, since he really wallows in that stuff (much like Tarantino of late). I've seen the Fenech thrillers and the Italian cannibal films, the Miike movies, etc. and I find his constant on-screen nostalgia really distracts from his chance to define his own style. Hopefully he can move away from that into more interesting and personal territory, and prove that he not just a pile of best-of list genre moments.

I wasn't as big of a fan of the first Hostel film. I preferred Cabin Fever to it. I thought it was an interesting concept, but I thought there were some major flaws in it. I loved Hostel 2. I do want to see it again. I really need to get this DVD, especially because of Edwige Fenech. You know how much I adore that women. She's a goddess to me. It is great to see true fans of Italian horror pay it homage. I think it's a shame that this film got a lot of undue criticism and a lackluster box office. It deserves more. I look forward to your blogging on this film. Happy Halloween.

I missed this during it's cinema run but am greatly looking forward to getting my hands on the DVD. I have a lot of time for Roth and his work and can't wait for your review. Some good points from Pete, too.I'm probably as guilty as a lot of folks in enjoying his nods to other works, but he certainly does have the talent to move on a bit. Happy Halloween to you all.

I look forward to your more extensive comments, but I agree, watching the DVD, I was even more impressed with the movie. I watched the director's commentary first and liked it better than the one with Tarantino and his brother, although that one was also quite entertaining... and did inspire me to rewatch Westworld, so that's a good thing.

Jeremy, I'm currently deciding whether to go for the UK release or the US.Does your DVD have 4 commentary tracks?

Thanks Pete,
I really need to watch CABIN FEVER again. I only saw the one time when it came out and I was a bit underwhelmed. I really need to give it another look, because my reaction might be different now...I do hope that Roth doesn't go overboard with the references, but I am excited to see someone finally paying tribute to some of these amazing Italian filmmakers who have been maligned for too long...

Thanks Keith,
I think HOSTEL TWO will continue to grow in stature. Thankfully the DVD is great, and I think it will do much better than it did in theaters...

Thanks Steve,
I hope you enjoy the DVD. I'd be curious to hear your thoughts on it. My US DVD just has three commentaries so if the UK has four go for that one and let us know what it is. Thanks for commenting...

Thanks Neil,
I haven't listened to the director's commentary yet, but your thoughts have me very excited for it. I hope to get through the other two this weekend...

Thanks for all the comments...

Thanks, Jeremy. I'd heard there was a US DVD out with a 4th commentary track (with Roth, producer Chris Biggs and documentarian Gabriel Roth). I'll let you know if I track this down, but the US sites I normally order from don't really give any details.

Thanks Steve,
I will have to keep a look out for that disc...