It's funny which films end up becoming personal favorites. When I first saw Andrew Fleming's fourth film DICK back in the summer of 99 I certainly wouldn't have thought it would be come one of my favorite comedies of all time, but here I am less than a decade later and I have no problem making that statement.
I have written very little on comedies here at Moon In The Gutter. I can't really specify why, as many of my favorites from BRINGING UP BABY to THERE'S SOMETHING ABOUT MARY certainly warrant posts. For some reason though I find comedies difficult to write about but I couldn't resist paying tribute to DICK, a film that I think is one of the most overlooked from the past decade.
Andrew Fleming was thirty-four when he co-wrote and directed DICK, his incredibly funny and charming spook of the Watergate scandal. He had made his debut ten years earier with the Jennifer Rubin horror film, BAD DREAMS and had gained some popularity with his teenage witch tale, THE CRAFT (1996).

Neither of those films, nor his work since, measure up to the intelligence and warmth of DICK though.
DICK tells the tale of two seemingly clueless and innocent high school girls in 1973 named Betsy Jobs and Arlene Lorenezo. As the film begins we find that they live in Washington, right across from the Watergate Hotel, and while trying to mail a love letter to Bobby Sherman one night they stumble across one of the most infamous crimes in United States history. Through a series of funny accidents they end up official Dog Walkers and finally secret Youth Advisers for President Nixon. After finding out that Tricky Dick isn't the trustworthy soul they thought, they decide to help two bumbling Washington Post reporters bring him down, and they use the code name of a film their brother got in trouble for seeing as their alias...namely Deep Throat.

There is so much I love about Fleming's film that it is hard to know where to begin. The script, written with Sheryl Longin, is a thing of beauty. Anyone in love with the seventies or familiar with the Watergate scandal will delight in the film's many references. The script is also perfectly realized and it is quite amazing how Fleming and Longin manage to tie everything together so well. I actually think the film could be used as a primer for young people attempting to learn about Watergate, and perhaps the change that it brought to this country when it happened. 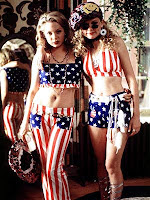 The set and costume design of the film is absolutely delightful, and never misses a step. Fleming's film is a real treasure chest for people who grew up in this period, or who just adore the clothes and look of it. The soundtrack is equally strong and features a compelling and sneaky score from John Debney. Of course as this is a film about the seventies, his score is inter-cut with some perfectly chosen songs of the period, from the audacious ALL THE PRESIDENT'S MEN title sequence set to the Jackson Five to the final moving moments of the impeachment set perfectly to Carly Simon's YOU'RE SO VAIN. Anyone seeing this sequence will believe that it was Richard Nixon and not Mick Jagger that Carly wrote this song for. 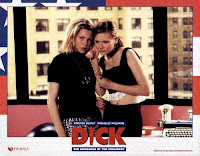 Fleming's direction is stylish, assured and he gives the film a perfect light touch. I have been amazed that he hasn't gone on to great things in modern film. His work here is really smart and he shows himself as someone who obviously grew up loving films like ALL THE PRESIDENTS MEN and THREE DAYS OF THE CONDOR, as his film pays as much tribute to them as it does the period in general.

Of course the film wouldn't work if the cast hadn't been up to the challenge but everyone in it absolutely excels. As our two protagonists, young Kirsten Dunst and Michelle Williams are brilliant in the film. Both had been child actors and they really come into their own here. Williams, who would later receive a much deserved Oscar nomination for BROKEBACK MOUNTAIN, is really charming as Arlene and her her character's arc is particularly well done. Dunst was on a roll in 1999, THE VIRGIN SUICIDES would be released just after DICK, and she is just as good as Betsy. She oozes charisma and plays the part of the slightly dimmer one with great intelligence. DICK falls in easily with the best work either of these two fine and charismatic actresses have ever done.

The supporting cast is equally strong with special note going to Will Ferrell and Bruce McCulloch's hilarious turns as Woodward and Bernstein. Dave Foley and Teri Garr also provide great comic performances in a film filled with them.
The star of the show though is Dan Hedaya, who turns in a pitch perfect and rather moving performance as Richard Millhouse Nixon. Hedaya is astonishing as the fallen president and he gives a real humanity to Nixon. He is so good in the part, that by the time the credits roll you feel as bad for him as the country he helped rip apart.
Which brings us to the true greatness of DICK. At the heart of this film, past all the silliness and humor, is a lament for a time when we weren't all so overwhelmingly jaded and untrustworthy. It's a sweet farewell to a pre-betrayed America. I find a moment towards the end when, as they are watching a tv broadcast of Nixon resigning, Betsy confidently says, "They'll never lie to us again" to be among the great moments in nineties cinema, as of course Fleming and his audience know the sad truth that the still idealistic Betsy doesn't.

Fleming's film got lost back in 1999, despite some really solid reviews. It didn't appeal to teenage fans of Dunst and Williams, as they had little knowledge or interest in Watergate, and older audiences didn't bother as they thought it was just another silly comedy. It played for less than a month and barely broke the six million mark, over half off its estimated budget making it a bit of a bomb.
DVD has helped a bit I suspect. The film was just re-released this past summer with the same great extras that accompanied the original release. These include an entertaining commentary, a short featurette, some incredibly funny bloopers and one jewel of a deleted scene. One hopes the film gets another re-release in the future with more extras but for now the current disc is fine.

For an interesting look at Debny's unreleased score, check here.

The official soundtrack can be found here.

The Suicide Girls have an interesting interview with Fleming here.

The almost all positive reviews the film received can be read here.

Finally, Roger Ebert's near four star look at the film can be located here.
at October 21, 2007

I haven't seen this movie in a number of years now, but I loved it. What a great comedy that it definitely underrated and pretty much forgotten. Both young woman are superb in it. They do a great job carrying the film. There is a lot of chemistry between these two. It's an interesting topic. I'm a kid of the 70's. I was born in 1970. This fits in with my youth. It's nice to see a spin of the true life events of that time period. Great blog on this movie. Made me wanna see it again.

Thanks Keith,
I really appreciate the nice comments. I think this film is something special, and I am gld to hear you like it as well...tahnks again...it fits in with my youth as well...