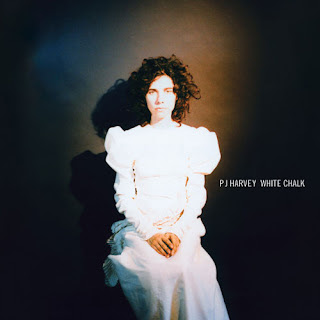 I recently picked up the new album from PJ Harvey and it is absolutely extraordinary. The British born Harvey has been one of my favorite artists since I first heard RID OF ME just after it came out in the early nineties, and her new album WHITE CHALK is among her finest work.
Harvey's music has mostly been guitar based since her first collection DRY, but the new record is largely piano based, and it adds yet another dimension to an already audacious and important talent.
WHITE CHALK is incredibly compelling, hypnotic and very moving during its eleven song running time. Harvey's abilities are often undervalued, but her work here again proves that she is among the most striking artists of the past two decades.
The sparse album is almost a one woman show but helping out are some of Harvey's usual players, including John Parish, Eric Drew Feldman and Jim White.
One thing that I continue to love about Harvey is that she still remembers the idea of the 'ten or eleven song, forty minute running time' album. She doesn't pad her stuff out, unlike most of today's artist, and her albums always so sound so concise and necessary. WHITE CHALK is no different, and her peers should take note that it isn't necessary to cram every second possible on the disc.
WHITE CHALK is, not surprisingly, selling poorly. In a modern music world filled with some of the most atrociously boring bands and singers possible, as artist like Harvey should be celebrated. WHITE CHALK is a lovely, heartfelt album that is already sounding like a modern classic to my ears. Give it a listen. 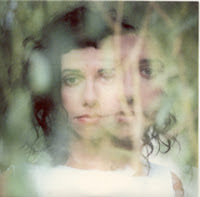 On a final note, I would like to say that I went out and bought this album in a store. I didn't download it (illegally or legally). I went out in a rather cold rain, walked in a store and bought a copy of the actual album. Driving home listening to it with the rain hitting against my window, I realized I would remember the trip and the first time I heard it. For a lot of people that might not be valuable, but the fact that I can hold a physical copy and still have it in case my computer crashes is reassuring. It feels real, and Polly Jean Harvey is among the most real artists we have. I can't imagine having her new album any other way...

POSTSCRIPT: Tim Lucas has posted a wonderful review of the album over at his Video Watchblog. I really enjoy reading Tim's music postings, and find them always evocative and enlightening. This one is no different, check it out.
at October 26, 2007

Haven't heard much of Harvey's music but this has reminded me I need to remedy this soon.
I totally agree with you re the feeling you get when you actually buy a CD (and also DVDs). Downloads be damned! You cannot beat actually owning the physical product. it will be a sad day if we ultimately have to go down this route to watch movies and listen to music.

I haven't had a Harvey record in a number of years now. This inspired me to check out some of her more current music. I did always like her and what she did. There is nothing like buying a CD. There's just something about having that physical item in your hand and reading over the liner notes. Downloads just aren't the same.

The album cover may have something to do with the album selling poorly, if it is; that, and the fact that WHITE CHALK doesn't really deliver what most PJ Harvey fans expect from a PJ Harvey album. Earlier today, I began to reply to your blog here, but my remarks quickly amassed a greater word count than I'm willing to leave in anyone's Comments box -- so check my Video WatchBlog tomorrow for more. Thanks for the inspiration.

Thanks Steve,
Check out some of PJ's work. She is one of the few modern artists that I really think compares to the true greats...I totally agree with you and Keith about downloads as well...I find it really depressing that someday (probably sooner than later) we will live in a near complete download society...

Thanks so much Keith,
give her new disc a spin...it is really special...

Tim,
I'm intrigued and can't wait to read your upcoming blog entry. As far as the sales go, I know that in just a few weeks out it has almost slipped completely out of the top 200. How that compares to how her typical records sell, I am not sure...thanks so much for the comments...I am excited to read your post...

Great album!check out this top 10 scariest songs. PJ's at number 8!

Thanks for the link to that list...it is an odd one. Elvis Costello's original studio take of I WANT YOU would be on my list...

I got this a few weeks back and like it ok, but hate the packaging. The cardboard inner sleeve the disc is packaged in is my central gripe. It doesn't even cover the full disc..part of that hangs out and when you put it it back inside you risk scratching it. Horrible packaging really :( a cardboard digipak would have been better.

as for the music... I like it though all the same, but it is low-key and minimal but still doesn't quite stand out to me as IS THIS DESIRE? but i applaud her effort to try and do something completely new. It's possible the album sales could pick up. I think i read that her album she did with john parish was the lowest sales wise.

Thanks Scott,
Nice to hear from another fan of IS THIS DESIRE. I love that recording and actually prefer it to TO BRING YOU MY LOVE...
as for the packaging, I agree. I love the cover photo and don't mind the mininmalist design but wish they would have just done a digipack...as it is the disc isn't protected at all. I actually just burned a copy to play and left the disc in the case as everytime you pull it out, you risk scratching it....what a lovely cover though...

Wow, I just found this post, it feels like I wrote it, as I have the same love and mythic experience with PJ, which is why White Chalk was the last CD I actually bought. Her albums are worth holding in your hands for that reason - you really remember the first time you heard/played them. For me, the first was a cassette of DRY, which I got in 1991 (or 2?) the same day I bought Nirvana Nevermind. I loved them both, but Dry felt like my very own... I saw her for the tour for 'to bring you my love' which I actually thought was her weakest album. I loooved... oh shit what was it, the one with "My first name's Angeline" -- much better... for me she's what Bob Dylan was to D. Boon, "my life could be her songs, I'm her problem child."

Awesome...thank you Erich. I am always thrilled to hear from other PJ fans and I loved reading your comments on her. I finally got to see her live last year and it was one of the most amazing shows of my life.
It's funny, but I think To Bring You My Love is her weakest as well. Ironic as it is probably her most 'popular' album. The one with "Angeline" on it is Is This Desire, which is just about my favorite LP from her.
She's such a special artist and I really value all my memories of discovering each album. I can't wait for the new one which is due out in early 11.
Thanks again Erich!