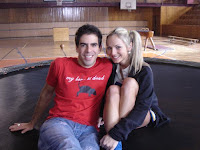 Eli Roth's THANKSGIVING trailer from GRINDHOUSE won my latest poll on great Thanksgiving films fairly easily. I haven't posted much on it here, but I loved GRINDHOUSE and I thought Roth's trailer might have been the best thing in it.
Shot in Prague while he was filming HOSTEL PART 2, the THANKSGIVING trailer is simultaneously funny, horrifying and brilliant. It also looks authentic, which is a credit to Roth and his crew as it isn't easy to really make a film look like something out of the late seventies/early eighties period.
For a great look at the making of this fantastic little film, I highly recommend
GRINDHOUSE: THE SLEAZE FILLED SAGA OF AN EXPLOITATION DOUBLE FEATURE, a book almost as eye popping and fun as the films that inspired it.
For more information and photos from THANKSGIVING, check out Eli's always fun and informative MySpace profile, and if you would like a T-Shirt celebrating the film check here.
I wish he would make a feature out of it....for those who haven't seen it, here it is. Be warned it does contain graphic violence, nudity and strong sexual content. So, if you don't like that kind of stuff, don't watch it.

Here are the final results from the poll:

Thanks to everyone who voted. My new poll for the week will be on Stephen King film adaptations, and I hope everyone will participate in that as well...
at November 26, 2007

What a great trailer. I love it. Eli Roth is a wonderful filmmaker. I've enjoyed his films. He's doing some of the most interesting work out there today in horror. This is a trailer that I would love see become a film. Here's hoping that he'll decide to do it. I'm glad to see that this won the poll.

Thanks Keith...I love this trailer and I wish he would go ahead and make it a feature as well...

What's the name of the actress who plays the cheerleader in the Thanksgiving trailer, the one who appears in both stills you posted on your site? Jordan Ladd was supposed to appear in the trailer, but that doesn't look like her. If I squint, she looks a lot like a girl I used to date.

Hey Joe,
Jordan Ladd is the girl in the car...the cheerleader is played by Vendula Kristek, or as she is better known...Vendula Bednarova.
Can I just say that if you dated a girl that looks like either Jordan or Vendula, then I salute you sir!!
Thanks for the comments, hope this was some help...

Thanks for that information, Jeremy. I am conducting a Google search as we speak. I did write "If I squint, she looks like a girl I used to date." Daughters of world famous supermodels are definitely not in my league. Vendula Bednarova might be more to my comfort zone.

I think it would be kid of bad ass to have a scream queen or B-movie actress for a girlfriend. If time were no object, Caroline Munro circa Dracula AD 1972 would be in my top five girlfriend listing.