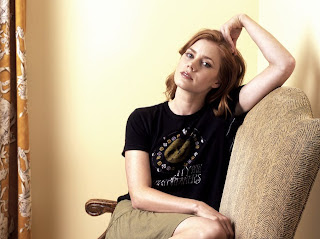 I haven't seen ENCHANTED but Out 1's recent post on it makes me want to. I can say though that I absolutely adore Amy Adams. Her performance in JUNEBUG a few years back gave me the same kind of feeling I had when I first saw Irene Jacob in THREE COLORS RED in the early nineties. It is the warmness that Adams projects in everything that she is in that separates her from pretty much any young American actress on the scene right now.
After making her debut in DROP DEAD GORGEOUS in 1999, the lovely Adams began popping up in various television series and films, and she seemed to immediately leap off the screen even when the role she was playing was clearly not as good as she was. The first time though that I knew that there was something really special about Adams was in Spielberg's CATCH ME IF YOU CAN in 2002, where she was so incredibly touching in the role of Brenda. Then it was almost like she vanished for a couple of years until the role of Ashley in JUNEBUG came along, surely one of the great parts and performances of the decade.
I've loved her in everything since, from her brief stint on the American version of THE OFFICE to Will Ferrell's love interest in TALLADEGA NIGHTS. Honestly, ENCHANTED isn't typically the type of film I would think to see, but I am so mesmerized by this young actress that I will very soon.
Adam's will next appear in the new Mike Nichols film, CHARLIE WILSON'S WAR, and has several more on the horizon. I look forward to all of them... 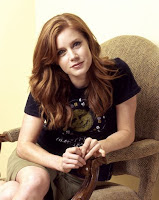 I'm with you there! The few things I've seen Amy Adams in so far, she's been absolutely radiant - your comparison with Irene Jacob is spot on.
I wasn't going to bother with 'Enchanted' myself, but every review I've read - Out 1, Antagony & Ecstasy, The Moviegoer - have said the same thing: Amy Adams MAKES the film.

I agree with you. I think Amy Adams is talented. I find her so adorable. I've enjoyed her in the films I've seen her in. She's a breath of fresh air out there. I'm not usually the type of guy who would see Enchanted, but her being in it has me actually wanting to see it. Great blog on an up and coming star.

Thanks Neil...I am curious to see if the film is as good as I know Amy will be...

Thanks also Keith...she is like a breath of fresh air...well put sir.


Amy Adams has some fantastic roles under her belt.We provide here the list of List of Amy Adams upcoming movies She's played Lois Lane in the recent Superman movies, a real-life Disney Princess in Enchanted, and aviation legend Amelia Earhart in Night at the Museum 2. We also loved her in The Fighter — heck, she's even worked with the Muppets! Arguably one of Hollywood's most underrated actresses, with a wealth of experience in many genres of movies, she's still not managed to get herself an Oscar. Well, with her new movies and TV project, I can only hope Adams gets the recognition she deserves.So to help keep you on top of this talented lady‘s anticipated new movie releases, we've made a handy list of the next Amy Adams films and tv shows. Let's check them out! Source