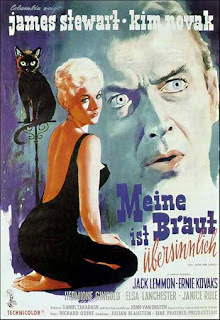 The names Jimmy Stewart and Kim Novak, and the year 1958, will always go together due to Alfred Hitchcock's legendary VERTIGO. VERTIGO has indeed cast such an imposing shadow, that it is often forgotten that it wasn't the only film the iconic pair made together that year. While not the cinematic milestone that VERTIGO is, Richard Quine's delightful BELL BOOK AND CANDLE has for too long been unrecognized as one of the fifties most essential, and enduring, films.
BELL BOOK AND CANDLE started out life as a stage play by John Van Druten. Written in the early part of the fifties, and probably inspired a bit by the Veronica Lake film I MARRIED A WITCH, Drutten's play ran for over a year on Broadway with Rex Harrison and Lili Palmer as its leads.

Optioned by Columbia in the mid fifties, Drutten's play was transformed into a gem of a screenplay by Daniel Taradash, who was on a bit of a roll with both FROM HERE TO ETERNITY (1953) and PICNIC (1955) recently under his belt. Columbia, excited about Taradash's script, gave the project to a prolific, if still young, director and the wheels began turning on the film in the mid part of 1957.
27 year old director Richard Quine had been making films since the late part of the forties, but he had yet to make a big name for himself in the industry by 1957. A one time child actor, the talented Quine was probably best known at this point for the noir PUSHOVER (1954) and the Judy Holliday vehicle THE SOLID GOLD CADILLAC (1956). Quine was the perfect choice for BELL BOOK AND CANDLE though as he was incredible skilled in comedy, romance and mystery, so Drutten's genre-bending play was tailor made for him to bring to the screen. 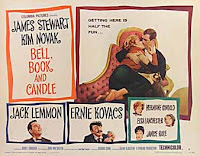 Casting began shortly after Quine was brought on, and the film was granted a relatively generous budget as Columbia felt they might have a hit. Rex Harrison was either unavailable, or not considered, and the great Jimmy Stewart was brought in to replace him as the literally beguiled male lead, Shep Henderson. With the much loved Stewart secured, the rest of the cast began falling into place with some of the best players of the day. Comedic hurricanes Ernie Kovacs and Hermione Gingold were hired, as was the always reliable Elsa Lanchester. A young television actress named Janice Rule was secured as Stewart's hapless fiancee Merle, and the soon to be legendary Jack Lemmon was brought in for one of the strangest roles of his career. All that was left for the studio and Quine was to find someone to play the lonely and trouble witch Gillian Holroyd, and the production could begin.

Viewed today, it is impossible to think of anyone other than Kim Novak as Gillian in BELL BOOK AND CANDLE. She fits the part so perfectly that it is hard to believe there was ever any question about the casting. Still, some other actresses were considered for the plum part but at Quine and Stewart's urging, Columbia finally gave the part to the then 24 year old studio player who had made such a big splash in the Taradash scripted PICNIC just two years earlier.
Cast in place, the cameras began rolling on location in New York City in February of 1958. Shot in some of the most beautiful color ever seen on the big screen through to April, by legendary James Wong Howe, BELL BOOK AND CANDLE is one of the great New York films of the fifties (and possibly ever) and one of the most distinctive looking films ever made.

Howe was already in his mid fifties when he shot Quine's great romance, but his work on BELL BOOK AND CANDLE is that of an excited and experimental young man firing on all creative cylinders. The film is a wonder to look at, with its brilliant bold brushstrokes of blue, lavender, purple and red, BELL BOOK AND CANDLE makes one yearn for the days of technicolor. I am actually disappointed every Christmas when the world doesn't turn out looking this way. Howe's photography is masterful throughout, whether it is in Gillian's Manhattan apartment (featuring inventive set design by Louis Diage) or in the film's snow covered outdoor shooting. One shot in particular of a hat falling off the Flat Iron Building on a freezing and quite early Manhattan morning is one of the most beautiful shots of New York City ever committed to celluloid. Perhaps the world never really looked like this, but it should have.

BELL BOOK AND CANDLE works so wonderfully well as a lot of things. It is a romance but, with its many spells and incantations, it is also more than a bit spooky. It's also very funny, and one of the great undervalued Christmas movies ever. I can't imagine a December without it. It's also a wonderful snapshot of the beatnik period as Hollywood saw it, with the film's beautifully designed Zodiac Club filling in for every existential romantic fantasy one might have of the period nicely.
The cast all appear, with one exception, to be having the time of their lives. Novak and Stewart got on nicely during both this shoot and their time with Hitchcock, and they both deliver warm and touching performances. Quine and Novak were falling in love during this period, and that no doubt helped him shoot her in many of the film's longing and bewitching close ups of her face and eyes. Kovacs, Gingold and

Lanchester are all used to their maximum effect here as well, with special mention going to Kovacs very funny portrayal of a burned out writer who thinks he has the inside track to Manhattan's witch population. The great Lemmon, probably my all time favorite actor, is the one who doesn't seem totally engaged. It isn't surprising as later he would call his role as Gillian's brother one of the most disappointing of his career. He isn't bad here, but he just seems distant. His performance is the one dull spot on an otherwise remarkably shiny and near perfect work.

BELL BOOK AND CANDLE would open on Christmas day in 1958 to healthy business and fairly solid reviews. It would receive two Academy Award nominations for its set direction, and the wonderful Jean Louis outfits that Novak wore so well. Howe was somehow ignored for his brilliant work, as were the never nominated Quine and Novak. The film would also receive a Golden Globe nomination for Best Picture but it failed to take home any awards.
Seven years after its release, a television series called BEWITCHED started and became an immediate sensation. Its tale of a lovely blond witch named Samantha, who marries a mortal, was clearly inspired by BELL BOOK AND CANDLE, and it gives the film an interesting cultural counterpoint that still resonates to this day. 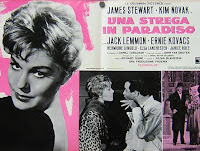 BELL BOOK AND CANDLE has never really gone away, but it often seems to sit just under the radar of many film fans. Much has been read into the subtext of the film, but I prefer to view it with the same eyes I had when I first discovered it on early morning television back when I was in the earliest parts of my teens.
Available on VHS since the earliest days of the format, BELL BOOK AND CANDLE is currently available on an OK DVD that features a decent widescreen transfer but no extras. A truly restored print showing Howe's invigorating color photography would be quite mind blowing, and any extras afforded to the film would be most appreciated.

Richard Quine would take his life in 1989 and, like I have written here before, I don't think he has ever gotten his due. Innovative with talent to burn, Quine's best films show him as one of the the best directors that came out of Hollywood's most underrated period. BELL BOOK AND CANDLE is his best film, a cool Christmas Valentine that has never been matched for style, grace, and heart.

Information on the DVD of BELL BOOK AND CANDLE can be found here.

The film's extraordinary soundtrack by George Duning can occasionally be ordered from Dusty Groove and it is essential. 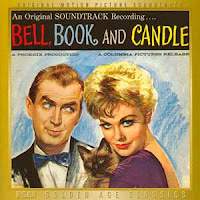 The original play is out of print, but used copies are available here.
at November 25, 2007

This is a great review, Jeremy. I love this film. It's been a few years since I've seen it. It's one of my favorite films of the 50's. It's also one of my favorite Jimmy Stewart films. He and Novak are perfect in this film. It is a gorgeous film to look at. What an amazing film. I'm definitely going to have to watch this witchy classic again sometime soon.

Thanks, Jeremy, for all the attention recently towards lovely Kim Novak, who is also a big fave of mine. In fact, your efforts provided me with the inspiration to draw a caricature of Ms. Novak for my own blog. Here's the result:

Thanks Keith,
I love Jimmy and Kim together. I think they were one of the great screen couples of the fifties...

Thanks also, Pete,
That is a great caricature and I really appreciate the nice words...I will post the direct link in a bit so more can see it...thanks again for the support...

If you're going to talk about this film, you have to spend some time talking about the George Duning score. It ties the film together, gives it an atmosphere that might otherwise have been lost, and adds just the right touch of jazziness to it all. Richard Quine, a composer himself, obviously knew Duning's value. The two worked together on nine films.

Thanks Michael,
You're right, I should have spent some time on the score, outside of just mentioning it at the end with that link.
It's actually one of my favorite soundtrack albums, and I totally agree with you about how essential it is.
I really love Duning and wish more of his stuff was readily available...thanks for the comments, hope you enjoyed the piece despite my not spending as much time on the score as I should have...

Thanks so much for this great review. It is one of my favorite films and I learned a lot more about it from this. I posted a link to your review on my facebook group, with credit,
under Bell, Book and Candle: the movie.

Great stuff. Just watched 'Bell Book & Candle' recently, for the first time since was a kid, and agree wholeheartedly that it's an overlooked gem. And about James Wong Howe's fantastic technicolor cinematography, plus that 'hat thrown off the Flatiron Building' shot. And about Kim Novak in general. Yes, 'Vertigo' is obviously a better film, but in some ways this is a more enjoyable performance. Cool website. Cheers.

Thanks so much Nancy and John for the comments. It is great to hear from other fans of this film. It reminds me that I need to do another post on it featuring screenshots from the new DVD that came out recently with the Kim Novak Collection. Thanks again!

Great review indeed, Jeremy. I liked the movie you dealt about anytime I saw it since I was 10 yo (now I'm 58).
You wrote: "I need to do another post on it featuring screenshots from the new DVD": have you done it? If so, could you pls link it?
Greetings from Italy
L.

This is one of my favorite films and your review is really great. One of my favorite scenes from any film is the one you mentioned regarding the hat being tossed off the flatiron building. I love that long fall to the ground on that quiet morning. For some reason I associate that scene with jazz. Maybe Miles or Coltrane was playing in NY at that time? Regardless, that footage is a wonderful NY moment.