One of my favorite ingredients to some of Joe Dante’s best films comes in his continuous casting of the wonderfully warm character actor Belinda Balaski. Whether it was in just one memorable scene in GREMLINS or in a much larger role in PIRANHA, Balaski always brought such a genuine feel to her roles that it is surprising she didn’t become more of a major feature in eighties and nineties cinema.
Balaski was born in California in the late part of 1947 and acted throughout her childhood in variety of local stage productions. She maintained her passion for acting through her teenage years and early twenties and finally began her career in front of the camera with a series of early seventies television series like THE COWBOYS, BARETTA and SWAT.
Balaski’s first feature film was the underrated and stylish Fred Williamson vehicle BLACK EYE (1974). Balaski is featured in a small but noticeable role in Jack Arnold’s surprising modern noir and the role would lead her to even more work including the Television films FORCE FIVE and DEATH SCREAM (both 1975).

Her first major role came with the Linda Carter film, BOBBIE JO AND THE OUTLAW (1975) which quickly became a fan favorite and it garnered Belinda some good notices.
Belinda next appeared in the rather unforgettable American International Production THE FOOD OF THE GODS for director Bert I Gordon. This giant killer animals gone amuck movie alternates between awful and hilarious but it is undeniably fun, and Balaski is one of the best parts of it. In a scene stealing smaller role, she is already demonstrating much of the warmth and charisma that would define her performances with Dante that were just around the corner.
A few more television roles followed before Belinda landed one of her best roles, as Maryann in Paul Bartel’s extremely entertaining 1976 production CANNONBALL. Balaski is great in this David Carradine rampaging and exciting road race film from the much missed director of classics ranging from DATH RACE 2000 (1975) to EATING RAOUL (1982).
Quickly emerging as one of AIP’s most promising actors, Belinda met young editor and aspiring filmmaker Dante around this period and she would feature in almost all of his feature films from that point on.

After a memorable role in a solid episode of CHARLIE’S ANGELS Belinda appeared in one of Dante’s great films, the John Sayles scripted PIRANHA (1978). This film has aged so incredibly well and Dante’s sparkling direction combined with Sayle’s sharp dialogue is an unbeatable combination. Balaski is lovely in the film and every one of her scenes is spiked with a real spark. PIRANHA is a blueprint on how to make an essential and great monster film. Fun, funny, alive and potent, PIRANHA is a real favorite.
The few years after PIRANHA brought more television and stage work for the undeniably talented Balaski and Joe Dante didn’t forget the young woman who gave so much to one of his first major directorial assignments. His next film would prove even more successful than PIRANHA, and would give the 35 year old Balaski one of her greatest roles. 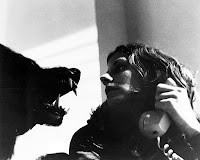 THE HOWLING (1981) is one of the great American horror films of the eighties, and one of the best werewolf movies ever made. Working again from a clever self referential John Sayles script, Dante’s THE HOWLING is a major work. Balaski is one of the film’s major highlights and her death scene is terrifying and unforgettable. She is also very funny and charming in the film, and her scenes are among some of the best in Dante’s canon. One scene in particular where she gets a werewolf tutorial from legendary Dick Miller is particularly memorable.
THE HOWLING should have made Belinda Balaski’s career. Unfortunately the tragic tradition of undervaluing great performances in genre films has dogged many wonderful actors, and it continues to happen to this day. Balaski began doing more and more television work after THE HOWLING, and she also never lost touch with the stage that she loved so much. She would have a very memorable one scene walk on in Dante’s GREMLINS (1984), and the great filmmaker thankfully never forgot her in his later career. Her voice appears in his EXPLORERS (1985), and she acts in AMAZON WOMEN ON THE MOON (1987), GREMLINS 2 (1990), MATINEE (1993) and her last big screen appearance is in his 1998 film SMALL SOLDIERS.

Outside of her work for Joe Dante, Belinda Balaski has appeared in dozens of television shows and movies, and stage productions. While she never got the film roles that she deserved, award winning Balaski has had a really wonderful and prolific career that has given fans many great performances and films. Her IMDB biography also reveals her as a teacher, painter and photographer. Horror fans will of course always remember her for her very memorable work in PIRANHA and THE HOWLING, but Belinda Balaski is much more than just one of our great overlooked scream queens. Her relatively small big screen legacy deserves celebrating.

I'll admit that I know little about Belinda. This was quite an interesting blog then. I have thought she was wonderful in films like Piranha and The Howling. I still love both those movies. I'll definitely have to check out more about her. Thanks.

What a wonderfully nice article! Thank you so much! I am quite flattered and honored!
Belinda Balaski

Wonderfull!!,I have followed an enjoyed the work of Belinda Balaski since viewing her first undergroud film titled "Let's Go To The mountains" Filmed on location in Colorado in 1965.Sincerly with love david greenberg

Belinda is the most beautiful woman on the silver screen! What she has done for the young children of the world should get her an academy award!!

Thanks so much Belinda for stopping by and leaving such a nice comment. I am honored and it was a pleasure to write about you.

Thanks also to Namascar and Fayden for your very nice comments. I really appreciate them...

Thank you, Jeremy, for a detailed account of a much-underappreciated and under-heralded actress in her day. Miss Belinda's certainly "paid her dues," and should have received much, much more rewarding work coming her way and greater accolades than she experienced. She's not only beautiful and highly-talented, but, from first-hand experience in seeing her working so patiently and creatively with our kids (my nine-year-old daughter, in particular) at her fine workshops in L.A., she's got a big heart to match her endless energy and experience.

Thanks so much Rick for the very nice comments. I can tell from everyone's reaction to this that she is indeed a very special and caring lady.
Thanks again for taking the time to comment.