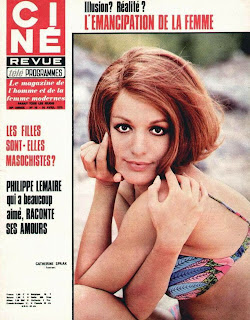 I don't really have any reason for posting these shots of Catherine Spaak, that appeared on eBay recently, other than I just thought they were great to see. It does kind of tie in though with the upcoming week here at Moon In The Gutter though. I feel like I have been posting too much on mainstream American cinema lately so this first week of the new year will be bringing in some more European delights.
So as I am preparing that, enjoy these two shots of Catherine. Also the Joe Dante poll, which has proved the most popular I have ever done, will be coming to an end soon so vote if you haven't already. Next weeks poll will be posted tomorrow, and it will have a more...Italian theme to it. Thanks to everyone who has been visiting. Moon In The Gutter has gotten more hits in the past few weeks than ever before. 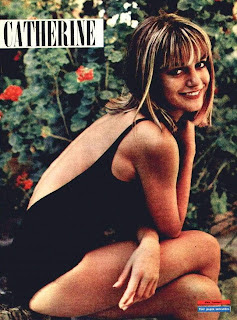 I love the pics of Catherine Spaak. What a beauty. I've always had a special place in my heart for European women. The older I get the more I love them as well as European cinema, music, etc. I look forward to your future blogs. I've really enjoyed your blog, as well as the Nastassja one, this past year. You do a great job with them. Good luck with them. Happy New Year.

Thanks Keith...I totally agree about the Europenan slant and really appreciate the nice comments

i first saw Catherine Spaak in a film with Jean Paul Belmondo. What can I say. I fell in love. The ultimate female.

Thanks...!!! I had forgotten about Catherine...I was 12 years old and fell in Love, after I saw her with Rod Taylor in " Hotel "...It was on TCM last night.
I had just returned from work and a difficult night
( Anti- Crime Unit, NYPD ), and seeing her again was such a wonderful reminder of my childhood...and my first love..It made me curious ..!! Enough, to Google formation on Catherine, today She looks Gorgeous ..! Still...and from what I see, even now, I'm still in love with her, and I'm 56 years old....Thanks Again for the images to jar my memory...making for a Happy Ending to a very long day....!!!