It has been just over twenty five years since Jean-Jacques Beineix's DIVA landed on American shores and alerted audiences that the freshest and most exciting filmmakers were once again coming out of France.
The 'Cinema du Look' movement was an explosion of style, color, fashion, emotion and the three directors most often associated with it produced some of the most recognizable and influential films of the eighties and nineties. The work of Jean-Jacques Beineix, Luc Besson and Leos Carax doesn't get the respect or attention it deserves, at least here in the United States, so here is a small tribute to my favorite films from these three iconic directors, one of which my little blog took its name from.

1. THE MOON IN THE GUTTER (1983): Beineix's most controversial film is the ultimate Cinema du Look film. Stylish, shocking, frustrating and never less than brilliant, Beineix manages to pull in influences ranging from American film noir to the Italian Giallo in the most audacious manner possible. My long look at the film can be found here.

2. BETTY BLUE (1986): The heart of Cinema du Look and the introduction to perhaps is greatest discovery, L'Enfant sauvage Beatrice Dalle.

3. DIVA (1981): The film that kick started the movement remains one of the most visionary and entertaining works of the eighties. Beineix's command of the medium this early on is frankly astounding.

4. ROSELYNE AND THE LIONS (1989): Beineix begins to slip here but it's still a gorgeous underrated production that deserves more recognition. 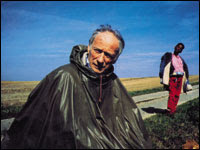 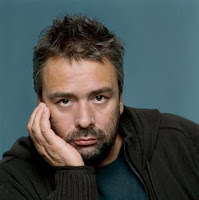 1. LEON (1994): The movement's swan song and one of its greatest achievements. The westernization hinted at in Besson's early productions is near complete here but it strangely only adds to his obvious brilliance and mastery of the medium.

2. SUBWAY (1985): One of the ultimate punk films...silly, moving, bold, sublime and masterful. A simultaneous embracing and rejection of the New Wave Besson grew up with.

3. THE FINAL COMBAT (1983): Besson's feature length debut remains as strange, flawed and as refreshing as ever. This must have felt like a kick in the head to audiences back in the early eighties who had given up on French cinema as a combative force.

4. THE BIG BLUE (1988): Unbelievably beautiful but vacant production that features some of the most unforgettable and strange images of the whole movement.

5. LA FEMME NIKITA (1990): The movement's most overrated production is ironically the easiest to see. Problems aside, the influence of the film cannot be denied but I will always prefer John Badham's underrated remake with Bridget Fonda. 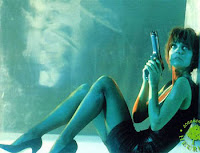 1. THE LOVERS ON THE BRIDGE (1991): "Let Paris Rot" indeed. Not just one of the great modern French films but one of the key works of the past few decades.

2. BAD BLOOD (1986): MAUVAIS SANG remains the most Godardian of all the Cinema Du Look's works and it is still a beautiful and imaginative work of art that would mark the team of Carax and Binoche as one of the most remarkable in modern cinema.

I hope to write in detail on all of the above works eventually. French cinema in the eighties of course gave birth to many more great directors (not to mention an incredible number of astonishing performers) but the small body of work by these three men remains a particularly resonate snapshot of a very special time. The relative unavailability of several of the above films shows that they still haven't gotten the due they deserve, at least in America.
at January 10, 2008

Thank you for your thorough overview. I've seen none of these films save for LEON and look forward to catching up. Maybe Criterion's release of DIVA will change the movement's popularity in the states.

Love Betty Blue & Diva.Haven't seen Moon in the Gutter in a longtime and just looked it up-it's not on DVD.Luc Bresson has unfortunately tried to become France's answer to Jerry Bruckheimer producing numerous mindless action flicks.Ive always loved Leon and Fifth Element is entertaining until Chris Tucker ruins the movie.Recently saw newest Angel A-beautiful looking film but not much there unfortunately.Leo Carax I'm not familiar with and will have to check out.

Terrific post on these great directors. Some of my best cinema memories are associated with when I first saw the likes of DIVA, BETTY BLUE and SUBWAY on the big screen.

Thanks Filmbo,
I am super psyched for Criterion's DIVA and I would love to see them do MOON IN THE GUTTER as well...

Thanks lastYear,
I haven't seen ANGEL-A yet but I am curious too...I was happy to see him returning to the directors chair...Chris Tucker is the only part of FIFTH ELEMENT that gets on my nerves, otherwise I really like it...

Thanks Steve,
That is amazing you got to see those on the big screen...I have only seen the majority on video...

This was a great blog post on three fine filmmakers. I've seen some of these films. My favorite is Leon. I love this film so much. I've seen it countless times over the year. Jean Reno, Natalie Portman, and Gary Oldman are all so good in it.

Thanks Keith...I freaking love LEON...love it. I totally agree with you about Portman, Reno and Oldman. In fact I still think it might be Natalie's best performance (and she has done a lot of really good work)...thanks for the comments.

I actually agree with you on Natalie Portman. I do believe it's her finest performance. She was outstanding in it at such a young age.

Thanks Keith,
I still remember seeing Portman's first appearance on David Letterman promoting this movie and being so impressed by how intelligent and well spoken she was...it is a great performance

I hope you'll forgive me when I say both that I love Anne Parillaud in Nikita and that the one film that I have not yet seen is your blog's namesake, Moon In The Gutter! (though I hope I get the chance to soon!)

Thanks Colin,
Just ignore any stupid remarks I make about NIKITA. It's great, it's just never floored me as much as it does most fans. Plus, I have always had an odd soft spot for the maligned American remake...Parillaud is terrific.
I wish MOON IN THE GUTTER was more readily available as I would love to hear your thoughts on it..as I always thanks for the comments. I continue to appreciate them.

carax is a french cimino, lovers on the bridge is like heaven's gate : too many money lost so it will be difficult for him

For me the best of the lot is 'The Big Blue', I've not seen all of them but this is what I liked the best. The cinematography is stunning and the score is terrific and the underwater scenes along with the simple story line just sucked me in.