Classic Song Chronicles: "To Love Somebody" (Barry and Robin Gibb) 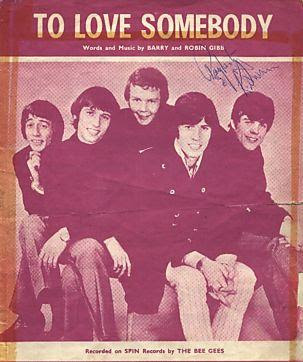 Originally written for soul great Otis Redding, who was tragically killed in a plane crash before recording it, at the request of their ambitious manager Robert Stigwood, “To Love Somebody” is one of the great songs of the sixties and one of the most important tracks the legendary Bee Gees ever delivered.

With the hopes of Redding recording it destroyed, Barry, Robin and Maurice Gibb recorded the Barry and Robin penned track themselves in 1967 for their historic third LP, Bee Gees 1st. The song, one of the album’s most majestic, would become The Bee Gees second single taken from the influential LP and would turn out to be a solid if not massive hit. Peaking just inside the Top Twenty in The United States and barely scratching the Top Forty in Britain, the song’s impact didn't begin to really be felt until 1969 when both Nina Simone and Janis Joplin recorded stunning versions of it.

Barry Gibb, recalling the writing of the magnificent track in the liner notes Rhino’s great 2006 reissue of Bee Gees’ 1st, stated “I wrote that in New York, and I think the last verse I finished with Robin in London after that". Barry also noted that he had in fact met Otis Redding the night the song was written, and it was that meeting that gave Stigwood the notion of the Bee Gees giving the song to the legendary soul Stax soul singer.

Covered literally hundreds of times by artists ranging from Rod Stewart to The Flying Burrito Brothers to Damien Rice (seen above) to Billy Corgan of The Smashing Pumpkins (seen below), "To Love Somebody" is one of the earliest examples of The Bee Gees absolute mastery of their songwriting craft. Working as both a soaring love song and a devastating lament for a lost love, "To Love Somebody" remains one of the Bee Gees most powerful compositions, and acts as one of the earliest chapters in what was soon to become one of the most successful and legendary songwriting teams in all of popular music.

While the Bee Gees original studio-take is a work of perfection, it can be argued that a couple of the later cover versions are even more accomplished. Nina Simone’s bruising and beautiful take from 69 especially adds further dimensions to the song, as does Joplin’s searing version of the song from the same year. Favorite version arguments aside, "To Love Somebody" is at the end of the day one of the essential Bee Gees songs.

While history often attempts to push the band into a separate corner from their peers, the wide ranging artists that have covered "To Love Somebody" show the Bee Gees as being very much at the head of the vanguard of the greatest sixties rock musicians. The fact that their own recordings remain so immaculate and individualistic make them all the more transcendent, important and inspiring.
at December 16, 2008

Many people don't realize that they did a number of good records in the late 60's early 70's. Their involvement in disco, while very lucrative, killed off their credibility and they never recovered from it.

Tahnks Rev,
I appreciate that. Glad to hear you love the song as well.

Thanks LastYear,
I know that is the typical view of them but they never lost credibility for me. I love everything up until their 1981 Living Eyes album...after that, their stuff is only sporadically good but I fogive them any late period faults as their stuff from 67 to 19 or so is just smashing.

"their involvement in disco, while very lucrative, killed off their credibility and they never recovered from it." Have to disagree Lastyear. Although the Bee Gees were hurt by the disco back lash, I don't think it damaged their credibility as songwriters. It's unfortunate that so many people seem to buy into this theory. I believe several of the songs, if not all of them, supplied by the Bee Gees as the sound track for Saturday Night Fever were written before the idea of the movie was brought to them. And even if that were not the case it in no way diminishes their music used in that movie. If that's what you mean by their "involvement in disco". The movie was a monster hit as was the soundtrack. As so many others jumped on the disco bandwagon a back lash was probably inevitable. Too bad the Bee Gees had to suffer the consequences. These guys had been around a long time before SNF and To Love Somebody is a wonderful example of their early songwriting skill.
Their songs are not going anywhere and continue to be recorded. Probably some of the best loved music of the 60's and 70's.
Jeremy, I love this idea of showcasing a particular song. I wonder if you would get more response from a separate music blog as most of your readers seem to favor your movie posts.