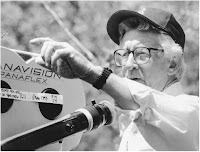 The director of two of my favorite Natalie Wood films from the sixties has past away at the age of 83. Of course Oscar nominated Robert Mulligan is known for much more than just Love With the Proper Stranger (1963) and Inside Daisy Clover (1965) but those are my two personal favorites from him.
Mulligan, an always interesting and solid director, got his start in television in the early fifties and is best known for his remarkable adaptation of Harper Lee’s To Kill A Mockingbird (1962). Other fan favorites include Up The Down Staircase (1967), Summer of ‘42 (1971) and the interesting little thriller The Other (1972). Mulligan remained active up until the early nineties and finished out his career with the lovely The Man in the Moon, in which he garnered a terrifically engaging and subtle performance from 14-year-old Reese Witherspoon, in what was her debut performance.
Film fans all over the world will miss Robert Mulligan, myself included. My best wishes go out to his friends and family.
at December 22, 2008

I loved Man in the Moon. It's a wonderful film. I was sad about Robert's passing.

I was shocked when I first found out that he was Richard Mulligan's brother. I dunno... it just seemed weird.

Ah, Richard Mulligan. He was so wonderful. The world hasn't been the same since he left us.