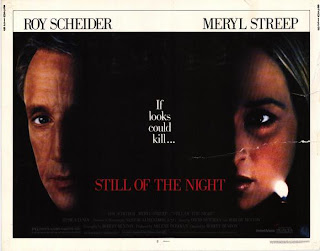 Writer/Director Robert Benton had been on quite a roll throughout the seventies but, like many of that decades filmmakers, things began to slip for him in the eighties. Three terrific films in the seventies (Bad Company, The Late Show and the multi-Oscar winning Kramer Vs. Kramer) had shown the Bonnie and Clyde co-writer as a filmmaking force to be reckoned with, and his work on the screenplays of popular films like What’s Up Doc and Superman certainly hadn’t hurt his credentials either. Benton’s first film of the eighties would prove to be his first disappointment with both critics and audiences, but 1982’s Still of the Night has many charms and its unavailability on DVD is unfortunate. 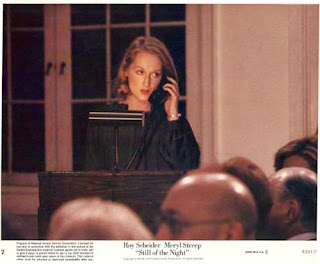 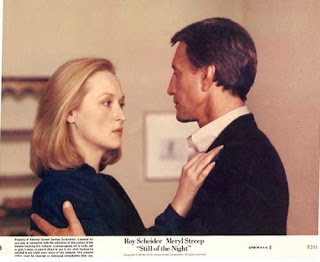 The term ‘Hitchcockian’ ranks among the most overused in cinema history, it’s also often used incorrectly but Still of the Night is one film that the term was certainly coined for. Benton’s flawed but effective drama is clearly meant as a 90-minute homage to all things Alfred, and for at least an hour he gets away with it quite splendidly. 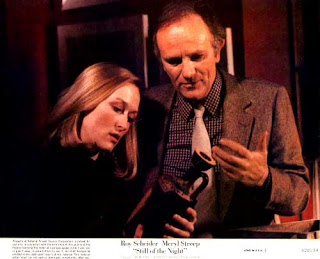 Starring the much missed Roy Scheider as the psychiatrist of a patient who has mysteriously been murdered, and a luminous young Meryl Streep as the late patient’s mistress who may or may not hold the key to his killing, Still of the Night has never left my cinematic landscape since I saw it in its initial run with my parents at nine years old in 1982. My memory of seeing the film is so clear that I can still recall the other film we saw that day, the Burt Reynolds-Goldie Hawn romantic comedy Best Friends, another picture that has quite a nostalgic pull for me. 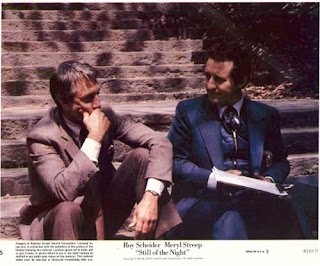 The big complaint about Still of the Night has always been the chemistry, or lack thereof, between Scheider and Streep. While the two don’t crank things up like Grant and Kelly in To Catch a Thief, there is something splendidly resonate about watching two masterful actors working with each other. Scheider is just fantastic as the disappointed Doctor Sam Rice, a man pushing forty who feels that he has never taken the chances life has routinely handed him. The supporting cast featuring Jessica Tandy as Rice’s mom also does solid work, but the film will be most surprising to fans that only know the Meryl Streep of a thousand different accents and looks. 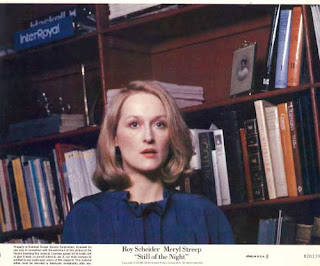 Streep was in her early thirties when she shot Still of the Night for her Kramer vs. Kramer director but she looks about ten years younger. Maligned at the time by several leading critics for her attempt at the archetypal icy Hitchcockian blonde, this is frankly the Meryl Streep I have always wanted to celebrate. Unnerving in how natural she is and oh so subtle, Meryl Streep in Still of the Night is captivating, haunting and all of the overly nuanced and calculated technique of her later more acclaimed work is refreshingly absent. 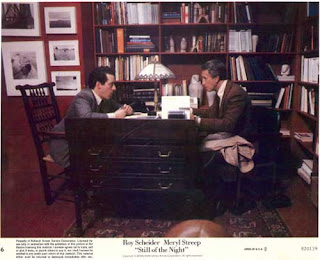 As much as Still of the Night sits well in my memories I must admit that the film does fall apart a bit in the last quarter, due more to Benton’s not entirely focused screenplay rather than his direction, which is never less than compelling. Despite its last act flaws, every time I think of that beautiful John Kander score or the achingly gorgeous photography of Nestor Almendous, I am that nine year old kid again blown away by his first double feature day in a theater. 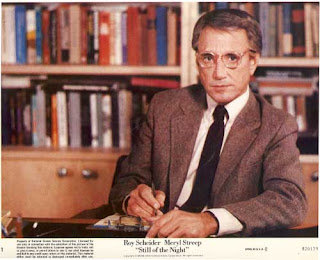 The shot in New York Still of the Night (called Stab in Benton’s early drafts) opened up to a mostly muted reception about a month before Christmas in 1982. Budgeted at ten million the film failed to make even half of that in its theatrical run, and the career of Robert Benton took a hit, although his award winning Places in the Heart two years later went a long way in restoring his reputation. Benton’s films since have all arguably been flawed works but productions like Nadine, Billy Bathgate, Nobody’s Fool and especially Twilight and The Human Stain show him as one of our most interesting directors, and someone who has an uncanny ability to bring out the best in his actors. 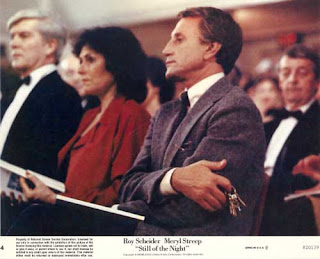 Still of the Night appeared on an Australian Region 4 DVD a couple of years back but I believe that version has already slipped out of print. Used VHS copies aren’t hard to come by but the best way to see the film right now in the states in courtesy of Turner Classic Movies, who sometimes run a widescreen print of the film.
at February 06, 2009

I was fortunate enough to tape this gem the last time it aired on TCM and you're right to lament its absence on Region 1 DVD.

STILL OF THE NIGHT may possibly feature my fave Meryl Streep performance to date. She is so good as the icy, slightly distant possible femme fatale. As a result, I always find myself empathizing with Roy Scheider's plight. Can he trust her?

I really love the mood and atmosphere of this film and how Robert Benton eases us into it. His laid-back style is just right for this film and for my other fave of his, NOBODY'S FOOL.

I'm so glad you championed this film as I don't know anybody who is a fan of this one, let alone heard of it. It's a very under-appreciated film.

Good pick. As you know, I'm a big Scheider fan. This is one no one seems to remember much (along with LAST EMBRACE). MGM released this one in other regions so there is hope for it here. It's also been on one of the HD Channels recently--MGM HD or Comcast On Demand HD.

Yes, I always liked this one, too. As well as Meryl's other one, THE SEDUCTION OF JOE TYNAN, which I don't think is on DVD, either.

Thansk guys,
It's really nice to hear some positive comments on this film. A DVD of this would be most welcome, along with Last Embace and Seduction of Joe Tynan as well.

I got this movie on vhs some time ago, but have never watched.

Me want to dig it up and give it a spin!

I'm a big Scheider fan too. I was so sad when he passed away last year. Jaws is my all time favorite film. I must have seen it 100 million times!

I should search the site, but I'll ask here too - have you ever seen the Men's Club? I totally adore that movie.

I'm lucky enough to have this on tape too. It's mind-boggling that it's not been released on DVD! It just screams "solid catalogue release". Such a suspenseful and stylish flick.

"Writer/Director Robert Benton had been on quite a role throughout the seventies . . ."

I'd email you directly, but blogs never seem to include a direct contact email.

Thanks Kerry,
I fixed the typo. I hate when I miss stuff like that...much appreciated.