Reading The Movies (A Meme) 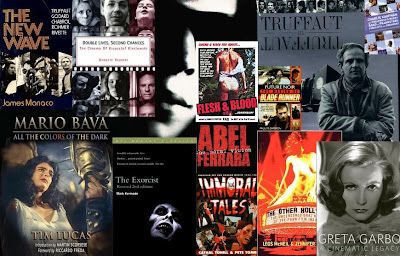 I’ve been tagged by the always terrific Dancing Image in a meme going around focusing on the film books that have proved inspirational in the way I think and write about films. It’s a terrific idea for a meme and I am more than happy to participate. I’ve selected a dozen or so of my favorite books on cinema that have proved invaluable references to me throughout the years, and I would recommend any of them to any fellow film lover. While these choices definitely show me as a cineaste more interested in film history rather than theory or criticism, I could have easily selected any number of critical works from a Kael, Rosenbaum, Ebert or Sarris that I have left off here…I just went with my gut though and these were the books that jumped out at me as I was constructing the list.

In alphabetical order by title:

Abel Ferrara: The Moral Vision: Brad Stevens penetrating look at the films and career of Ferrara is one of the great film studies I have ever read. Carefully balancing history and criticism with one of the sharpest pens around, Stevens finds the depth and complexity in Ferrara’s work that so many others miss.

Charlie Kaufman and Hollywood’s Merry Band of Pranksters: Derek Hill’s wonderfully perceptive book on a movement most haven’t even noticed yet will continue to resonate for years to come, especially when the work of folks like Sofia Coppola and Wes Anderson have had time to really sink into film history’s collective psyche.

Double Lives, Second Chances: Annette Insdorf’s tremendous book on Kieslowski’s life and career is my favorite on the much-missed Polish director. As with her studies on Truffaut, Insdorf brings an equal amount of passion and intelligence to her look at Kieslowski and her thoughts will make even the most seasoned watchers notice something new in his films after reading.

Flesh and Blood Compendium: Flesh and Flood was a daring British film magazine that stretched throughout the nineties. This massive best-of collection features many of their best interviews, reviews and studies. Just like the magazine, it is a truly ambitious and quite astonishing look at the outer edges of cinema history.

Greta Garbo: A Cinematic Legacy: The ever popular “Films of” type book has been done time and time again but never has it been so meticulously researched or as beautifully presented as Mark Vieira does here.

Immoral Tales: I have written of the profound effect this Tohill and Tombs book has had on me, and it has lost none of its importance in the near fifteen years since it first hit American shores.

Mario Bava: All The Colors of The Dark: Tim Lucas’ monumental book is not only one of the great biographies ever written on a filmmaker, but it also stands as one of the great film histories ever published. Tim’s ambitious work will make you rethink not only Mario Bava's place among the great filmmakers of the 2oth Century, but also the history of film itself.

The New Wave: James Monaco’s book had a huge impact on me when I discovered it in high school, and I still think it is the best thing ever written on the films of perhaps cinema’s most influential movement. I like it so much that I am choosing it over another favorite, Godard on Godard.

The Other Hollywood: Legs McNeil and Jennifer Osbourne's extremely entertaining and informative work on the part of film history so many like to ignore is important stuff. The first half of the book covering the earliest days of the adult film industry up through the early eighties when video take over is always eye opening and at times jaw dropping.

Truffaut by Truffaut: I have an entire book shelf dedicated to books on Truffaut and this gorgeous coffee table collection is my favorite. Told through his own words and including hundreds of rare documents and photos, this is my favorite book on my favorite director.

I would love to see the lists of the following...so consider yourself tagged, but don't feel any pressure to join in if the timing isn't right:

Kate at Love Train for The Tenebrous Empire.

IbeTolis at Film for the Soul.

Amanda at Made for TV Mayhem.

"I just went with my gut though"

I feel the same way - I think all of us could easily have picked the same books, but it's that idiosyncratic, individual choice which is the most interesting - and most illuminating (anyone who wants to see my list can see it here: http://thedancingimage.blogspot.com/2009/05/reading-movies.html).

I'm not familiar with Immoral Tales - what is it, and why its importance to you?

Hey Jeremy, thanks for tagging me. Here's my list:

Nice inclusion of Tim Lucas' Bava book - it is incredible piece of work. The definitive examination of the man and his films to be sure.

I love reading movie books just about as much as watching movies. My favorite has to be the gloriously decadent Easy Riders, Raging Bulls. It's like the Please Kill Me of film history! Have you read Killing for Culture, the Creation Books title on "snuff" movies? Incredible.

Thanks for the tag, Jeremy! My list will be going up shortly along with James'. Great choices yourself, by the way. Lots of stuff to put on my book-buying list.

Finally got around to posting mine and Brandon's list at Out 1. You have a great list here, and hopefully we do too!

Yikes. I just saw this. Where have I been?!? This sounds like fun. If I ever get a free moment from school (like this one minute break I'm taking here), I'm going to do this, if that's alright. It's a little late, but you know, certainly fun still...

Amanda, everyone's ready to jump in whenever they feel like it, months, even years down the line! Just let us know when you do go for it, so I can link it up on my master list of all the books:

Post a link in the thread beneath that entry above, and I'll see it and link it up. Thanks for joining!