A Moon in the Gutter Q&A with Author Tara Hanks 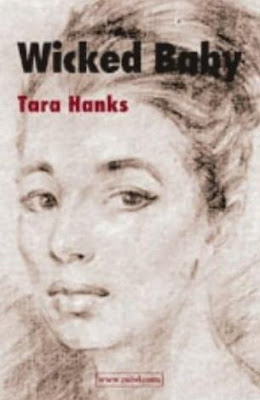 I am very pleased to present this exclusive new Q&A with someone I greatly admire, author Tara Hanks. Tara and I became friends a couple of years back via Facebook and we share many of the same passions, especially our mutual love and admiration for Marilyn Monroe. Tara is an accomplished and acclaimed writer and I am thrilled that she took time to participate in this with me for my readers. Comments are appreciated and make sure you visit Tara's sites (which are linked throughout) and order her books after you read.

1.Tara, can you tell us a bit about yourself and your background?

2. How did you first become interested in writing and who were some of your early influences?

My dad deserves a heap of credit, having read to me every morning before work when I was a kid. I’ve always been a voracious reader, and the first stories I wrote were comic strips. But it wasn’t until I left home and went to college that I began to take my writing more seriously. Emily Brontë was, and still is, an inspiration to me.

3. Can you tell us a bit about Wicked Baby and how you first became interested in the Profumo Affair.

Well, the movie Scandal came out when I was in my teens, like the girls involved in the affair. Then in my twenties, I started to understand their experiences more directly. One day I found three books on the subject in a used bookstore, and the novella grew from there.
The Profumo Affair was all about moral hypocrisy, and that is still a feature of British society. The characters and train of events have always seemed to me like pieces in a chess game.
On another level, Wicked Baby is a sort of coming-of-age novel. At the time I was reading authors like Jean Rhys, Patrick Hamilton and Charles Bukowski, who wrote about the underbelly of modern life. 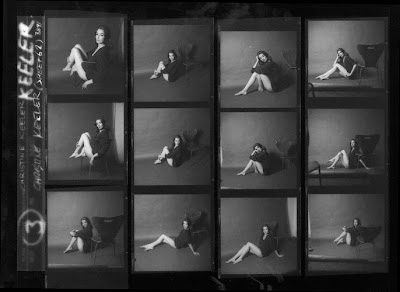 4. You mentioned Scandal, What do you think of the film?

Scandal is one of my favourite British films of the 80s, along with Wish You Were Here, Absolute Beginners, Letter to Breshnev and Mona Lisa. I love Joanne Whalley and John Hurt’s performances, and the way music is integrated into the drama – old songs and new, like Dusty Springfield and the Pet Shop Boys’ ‘Nothing Has Been Proved’. It’s an evocative movie, though perhaps a little sketchy.

5. It's great to hear you namecheck all of those wonderful films and I share your admiration for Scandal, which I think is one of the more underrated films of the eighties. Okay, Can you chat a bit about The Mmm Girl?

Having been a Marilyn Monroe fan for years, I felt frustrated that her personal experience was somehow lost to us. The story of her life is usually told to us through other people’s eyes. So The Mmm Girl was an attempt to return to the source, and was written in the first person.
As well as Marilyn, I love American literature and was influenced by classic novels like To Kill a Mockingbird, The Grapes of Wrath and Tender is the Night. 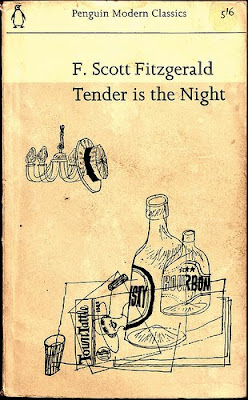 6. I love all three of those works as well, especially the Fitzgerald work. Now, I know we share a passion and admiration for Marilyn Monroe. I first discovered her in my early teens and was positively obsessed for years. How did you fall in love with her work?

My first idol was Debbie Harry, so I’ve always been fascinated by peroxide blondes. I was dimly aware of Marilyn from an early age, through images and rumours. The first films I saw were Bus Stop and Some Like It Hot, and as I didn’t own a television at the time, they kept on playing in my mind. Then I began reading about Marilyn and collecting postcards. Like many people, I felt an empathy with Marilyn, and that has grown over the years.

7. I have to say Debbie Harry was an early hero of mine as well and she remains one of my biggest personal influences. Back to MM...is there a particular aspect of Marilyn that draws you in more than another? I so admire her strength and how you can see that at various times in her career, from her leaving Fox for New York in the mid-fifties to that final, brilliant and quite defiant Bert Stern photo session right before she passed away. She just oozes strength and intelligence. 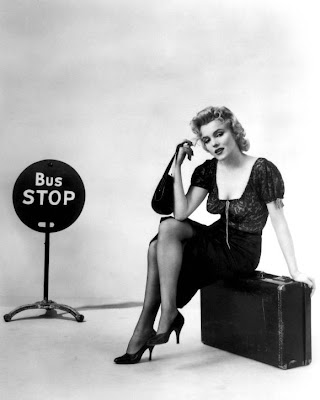 For me, I think it’s her warmth and openness. Considering the difficulty of Marilyn’s life, almost from the beginning, and her deep insecurities, it’s all the more remarkable to me that she never became really bitter or cynical, and that she was so brave and generous in the way she lived.

8. My favorite role for Marilyn is in Bus Stop. Do you have a particular favorite and why? 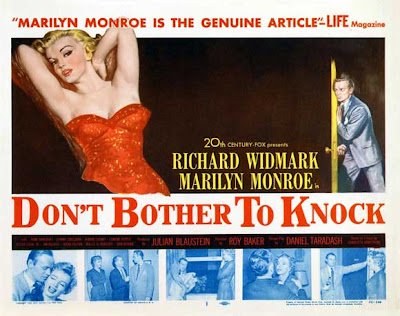 It’s very hard for me to pick a favourite role, because I love so many. From Marilyn’s early performances in Clash by Night and Don’t Bother to Knock, before she was considered a sex symbol, to the comic genius she revealed in Gentlemen Prefer Blondes and The Seven Year Itch, and the depth and pathos of her final movie, The Misfits.
My greatest frustration is that Marilyn wasn’t given the respect she deserved and missed out on parts she could have played brilliantly. I can’t think of many other actors who have that same luminous quality, except maybe Chaplin or Garbo. Marilyn was so magical on camera that most people didn’t realise she was acting, and that must have been hard for her to deal with.
Marilyn’s photographs are also extraordinary - she may have been the most gifted model of all time. There are many beautiful women, but nobody else has that glow.

9. We also share an interest in another famous blonde. Tell me how you first fell under the spell of Ms. Ciccone?

I’ve often wondered where my interest in blondes comes from, given that I’m a confirmed brunette. The illusion of glamour intrigues me, and going blonde is part of the process.
As for Madonna, I really grew up with her. I was eleven years old when I bought one of her earliest records, ‘Lucky Star’. I can remember seeing her perform at Live Aid on a friend’s TV, and hearing her say ‘fuck’ on the radio with my mum in the kitchen.
Like Madonna, I come from a Catholic background. We also share a love of old Hollywood, and to me, Madonna is a force to be reckoned with because she stands for freedom and independence without denying her sexuality.

10. I admire all of Madonna’s work but I must admit that I am mostly just passionate about her pre Ray of Light material. I am especially fond of the Like a Prayer era and think she was at her peak during that time. Do you have a certain period you gravitate towards?

Desperately Seeking Susan, Like a Prayer and Ray of Light are my three favourite points of Madonna’s career. Susan was the first film I sneaked into underage, and it was, to me as a shy thirteen year-old, exhilarating.
Like a Prayer marked the point in time when I realised Madonna was not just a star but a talented musician, and Ray of Light was, in a sense, her creative peak.
But then, over the last ten years Madonna has produced some of her most interesting work and spectacular live performances. I can’t wait to see what she does next! 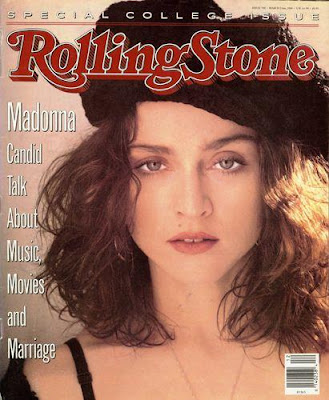 11. Have you ever seen Madonna’s 1989 Rolling Stone cover shot promoting Like a Prayer? She is staring right at the camera with a knowing boldness, her hair is long and dark and she is wearing a beret. It’s still one of those photos that cuts right to the bone for me and that is always how I picture her, strong, daring and in your face. Do you have a particular shot or moment that helps define her for you?

I remember it well because foreign magazines were very hard to come by in those days. I must have pored over it for hours. I felt very close to Madonna during the Like a Prayer era, because it seemed she had finally unmasked herself.
Madonna is also a great model, perhaps because of her dance background. My favourite shots of her are by Herb Ritts, from another Rolling Stone spread in 1986. She was newly married to Sean Penn and very hopeful about her life and career. 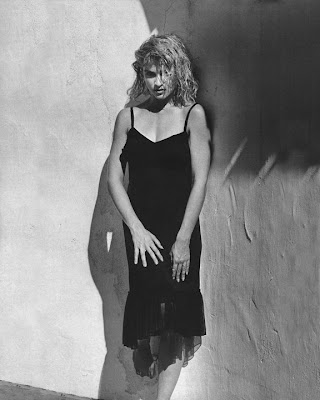 12. What did you think of her recent Interview cover and spread? I thought the photos were quite brilliant and it really seemed like old-school Madonna.

I loved it. The black and white photography, blonde hair and crucifixes took me back to the early days. I find it inspiring that she hasn’t become more conservative with age.

13. Madonna has been heavily maligned as an actress but I think she has had moments of brilliance, especially in Desperately Seeking Susan and Dangerous Game. What are your thoughts on Madonna the actress?

Some of the criticism has been unfair, though she has made unlikely choices. When a movie fails, Madonna always gets the blame. But I agree with you about Desperately Seeking Susan and Dangerous Game, and I also liked her performances in Bloodhounds of Broadway, Dick Tracy and A League of Their Own. Evita was incredible as well. 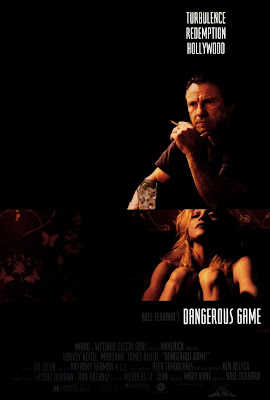 14. A League of their Own was filmed in the town next to my high school during my Junior year. I was working at Baskin Robbins and was frustrated because she visited the town's other Baskin Robbins but never came into mine! A friend and I tried to sneak onto the property where she was staying at the time but I never got to meet her...that's actually a funny story but back to the interview.
Madonna was often compared to Marilyn but personally she always reminded me more of a modern day Marlene Dietrich. Can you think of anyone who can rightly claim to being a “Modern day Marilyn” or even “Modern day Madonna” at this point?

I can’t think of anyone who could be the ‘new Marilyn’, though I sometimes catch glimpses of that emotional rawness she had in other actresses – like Juliette Lewis in Cape Fear, or Naomi Watts in Mulholland Drive. And there are certain women, like Princess Diana or Kate Moss, who also have an iconic quality (though in different ways.)
Madonna’s impact on the music industry is palpable, and most female artists owe something to her. My current favourites are Amy Winehouse and Lady Gaga, who both exude a fierce individuality.

Frida Kahlo, Billie Holiday and Marvin Gaye are my other biggest influences. I admire the way they turned their experiences into art. My favourite writer today is Donna Tartt. Both her novels are exquisite.

16. Tell us about some of your other activities and what are your future plans?

I’m currently writing my third novel, which is set at the time of the English witch-hunts over 400 years ago. And I regularly post news, articles, and reviews on my website. Most recently I’ve started a separate blog relating to all things Marilyn Monroe. 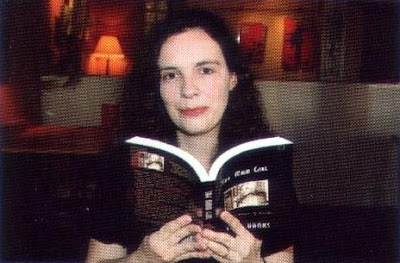 Thanks so much Tara for doing this. It was a real pleasure learning more about you and your work...and of course it is always wonderful to come across someone whose life experiences are close to my own. Thanks again!
at June 19, 2010

Damn good interview. A writer who is new to me. Scandal is a cracking film!

Ummm, she mentions Scandal, Absolute Beginners, Letter to Brehsnev AND she loves Madonna?!?

Who is this wonderful woman??? I must know her!

Thanks so much Paul and Amanda for reading and commenting! I hope you both will check out her work. Thanks again!