***Mike Lippert is an excellent writer on film whose work I always really enjoy. This piece on Punch-Drunk Love originally appeared over at Mike's terrific You Talking to Me? blog and he has been gracious enough to let me reprint it here. Mike also has great pieces on Boogie Nights and Magnolia as well that everyone should check out. 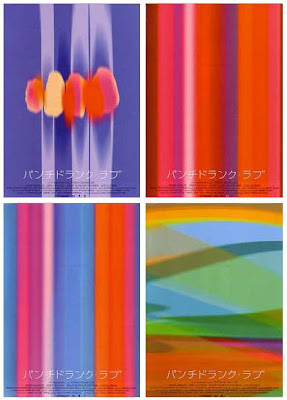 
I have a love in my life. That makes me stronger than you could ever imagine- Barry Egan, Punch-Drunk Love

After a, expansive epic like Magnolia, a film like 2002s Punch-Drunk Love, at a mere ninety minutes, feels like a minor work from Paul Thomas Anderson. However, upon closer inspection, one finds that PDL is Anderson’s most focused and coherent film, while also managing to be his most artistically daring. Not only is the running time of the film the opposite of Anderson’s two previous epics, but it also plays like their backwards reflection, as it opens with the film’s key image and instead of being about the desire to repair family relations, its main character seeks to break away from them as they are an agent of torment for him. PDL is also an experiment of sorts for Anderson because, instead of using his images to tell the story, he uses them instead to provide a physical projection of Barry’s inner psyche onto the world around him. When Barry Egan is trapped in his office, trying to engage in conversation with possible love interest Lena, his sisters constantly demanding his attention on the phone, his crew experience chaos as a fork lift crashes into a self, sending boxes crashing to the ground, we get to realizing that Anderson is giving us a physical reenactment of what it must be like to be living inside Barry’s head at any given moment. It is a jarring and daring method of metaphysical filmmaking.

The key image in PDL, much like the frogs in Magnolia, appears without warning or explanation. It is a small piano, latter identified be Lena as a harmonium (an ironic twist, as the harmonium is the key object that Barry clings to in moments of unbearable chaos. It,much like her, is the sole object that can sooth Barry’s soul), which is mysteriously ejected from a cab and placed on the sidewalk in front of Barry’s place of business after a van flips over due to a violent explosion and then instantly disappears. Here Anderson is setting up a metaphorical divide in Barry’s psyche. By providing us with a violent image, followed by an innocent one, Anderson shows us the dual nature of Barry who is both a naive child with no true sense of how human communication works in the everyday world, but also a ball of burning rage that oozes beneath the surface just waiting to explode. This is a contradiction we see constantly recurring throughout the film, most notably in a delicate scene where Barry tells Lena that she is so beautiful he just wants to get a hammer and smash her face in.
That scene, although seemingly violent by design, actually provides a startling moment of revelation when placed in comparison with the story his seven sisters tell of the time he smashed the sliding glass door at home with a hammer. By expressing his love for Lena via wishing to smash her face with a hammer, Anderson is showing us a shift in Barry, who no longer desires to put his energy into bursts of violent rage but rather, to putting all of his energy into loving Lena with all his heart. 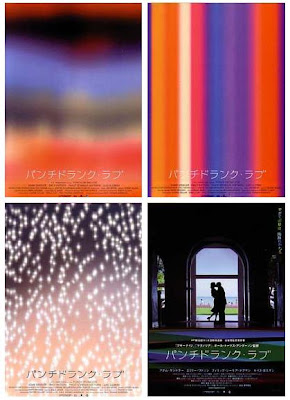 That scene segues perfectly into the film’s second key image (the phone) and the final scene in which Barry encounters the mattress man Dean Trumbell who harasses Barry after having called a phone sex line, and whose goons also put Lena in the hospital after crashing into Barry’s car. The phone is a cause for much anxiety in Barry’s life, like how his sisters constantly harass him at work with their insistent calls. Also the phone is the sole object that stands between Barry and his ability to fully commit himself to Lena because it acts as a constant reminder of Barry’s relationship to Trumbell. It is only with slight irony that, when going to see Trumbell, Barry arrives with the receiver of his home phone in hand, the cord dragging behind. It is here that Barry mutters the classic line about having a love in his life, and, in the films most uplifting dedication of love, finally hands the phone off to a spare employee after threatening to “beat the hell” from Trumbell.


Another use of symbols worth exploring is the way Anderson uses colour in PDL, especially red and white, as discussed by Cubie King in his essay Punch-Drunk Love: The Budding of an Auteur. Cubie assess that, “Red serves as the colour that leads to Barry’s happiness” (2005). Cubie could be on to something as he recalls significant moments of red being used: the woman dressed in red in the background at the supermarket as Barry looks for items he can earn frequent flyer miles off of, the red cab that drops the harmonium onto the sidewalk, the stewardesses dressed in red who wait at the end of the terminal for Barry to board the plane to Hawaii, and the red arrow which shows Barry the way to escape from the four blonde brothers (2005); all signs leading to Barry’s happiness. 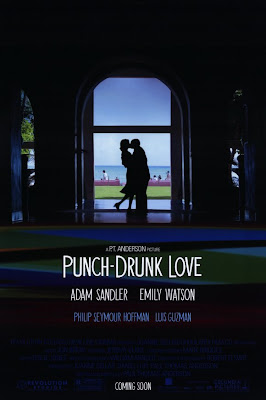 White on the other hand, according to Cubie, acts as the opposite. It is his "oppressor" (2005). The white walls of Barry’s headquarters entrap him, the white phone receiver which is the cause of much anxiety for Barry, and the white hallways which Barry must frantically run through in order to get back to Lena for their first kiss, etc. Thus, further exemplifying Anderson’s desire to make PDL play like a physical representation of his main character’s fragmented psychological state, and, as a result, crafting a film that has come closer to any since Scorseses’ After Hours (1986), to providing an in depth representation of character psychology entirely through images.
Posted by Nostalgia Kinky at 5:01 AM

A very fascinating take on this film. I really do feel like this is PTA's most romantic film and definitely the best thing Adam Sandler has done so far. I also love the use of that song from Altman's POPEYE... in fact my fave portion of the entire film is the stuff that takes place in Hawaii. The color scheme and vibe is just incredible.

Thanks J.D.
I really love PUNCH-DRUNK LOVE so I am glad we got at least one on it for the Blogathon (hopefully another is coming).
Thanks for commenting!

Hey Jeremy, looks great. Yes, hopefully more will come on PDL, it truely is a treasure.

Thanks Mike and thanks again for participating!