***I was really hoping someone would submit a piece concerning the remarkable music that has graced Paul Thomas Anderson's films so I was really happy when Scott Nye, author of the excellent The Rail of Tomorrow, told me I could repost this article he originally wrote for Film Babble's September of '09's Soundtrack Blogathan. I can't think of P.T.A. without having the music of Jon Brion, Aimee Mann and Michael Penn rushing through my head and this splendid piece really captures why music is so important to his films. Thanks to Scott for letting me add it to our Blogathon.***


At first glance, music and film seem so terribly disconnected, joined together more by the convenience of having to keep an audience entertained on multiple levels than by the feeling that music and images simply belonged together (and just to get our terminology correct, a “soundtrack” for a film is ALL the sound going on in a motion picture, not just the music). Now, of course, the idea of music existing totally separate from a moving image is archaic – any major musical creation requires an accompanying video. Similarly, it’s rare to the point of nonexistent for a major motion picture to exist without music. In our modern conscience, the two are of a piece, though rarely regarded as such.

When Paul Thomas Anderson’s There Will Be Blood came out, a surprisingly large number of critics found fault in the overwhelming nature of Jonny Greenwood’s score. I found that it enhanced the picture tremendously, leaving us teetering on the edge of, ideally, our very sanity, certainly our hold on reality, a struggle familiar to Daniel Plainview. Its dissonance reflected and created the uncertainty and fear Anderson laid the groundwork for. More pointedly, it represented a continuing development in Anderson’s work that is often discussed film-by-film in a sort of throwaway sense (“oh, and the music’s great”), but, to my knowledge, never considered as essential to his oeuvre from Boogie Nights onward – for Anderson, music isn’t there to simply enhance or underline something created separately in the film; music is as essential to the image in the creation of cinema itself.

To be sure, this didn’t come to fruition until his last two films, but his understanding of it was clear in Boogie Nights, a period piece that takes place in the 1970s and 80s, but couldn’t be more of a piece with 90s cinema. Certainly taking many visual cues from Martin Scorsese’s incredibly influential Goodfellas, Anderson expands upon and deepens the way Scorsese used music in his film to create so many different things in Boogie Nights. Many of the musical moments we remember – the explosive opening and “Best of My Love,” the pool party set to “Spill the Wine” that reaches its climax visually and musically when the camera follows a girl underwater, or the wildly diametric “Sister Christian”/“Jesse’s Girl” two-shot that is absolutely essential to the most tense scene in the film – are, like so many other musical moments in cinema since Goodfellas, lifted from pop music. True, these are among the best applications of the form, but uses of popular music, and our familiarity with those pieces, to create something that isn’t there otherwise is now such a crutch that, with the exception of the “Sister Christian”/“Jesse’s Girl” stand-off, most of the music, and the ways it’s used, date the film far more than the 70s clothes and hairstyles ever could.

But about forty-five minutes away from the film’s end, wrapped around a sequence of Jack Horner surveying his crumbling empire, is a slight piece of music by the film’s composer, Michael Penn, that does more to create the overwhelming, penetrating sadness of this moment than a similarly-toned track from the 70s could never have accomplished. The hopelessness and depression these characters face isn’t epic, and hardly profound – it’s melancholic. 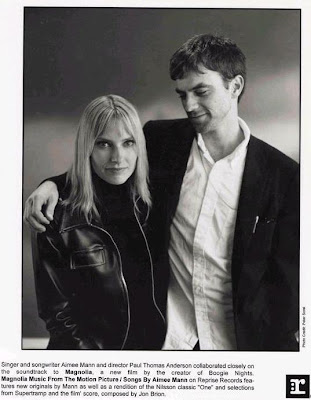 The warring impulse between the created score and the insertion of popular music came to a head in Magnolia, oddly appropriate for a film as scatter-brained and dissonant as Anderson’s 1999 near-masterpiece. The film opens with Aimee Mann’s cover of “One,” which will set us up for Mann’s voice to accompany us through this journey, to the point that a full-on musical number to one of her songs will provide the bridge at a key emotional turn in the film. And, indeed, Anderson's use of her music almost exclusively is one of the more inspired uses of pop music in film, as it at once creates those moments we love so much while still keeping the film personal. In the end, the film seems to belong to Mann as much as any cast member; she becomes a second narrator. Further, Strauss’ "Also Sprach Zarathustra,” better known as the theme from Kubrick’s 2001: A Space Odyssey will accompany a revelation and a sex seminar, and Supertramp will introduce us to an environment in which unrequited love is felt more desperately than many of us would be prepared for.

However, I remain fascinated most with Jon Brion’s heartbreaking accompaniment that rises and falls, but is always pervasive, as Stanley refuses his call to an absolutely decimated Jimmy, Donnie begs for some outlet for his love, Jim thanks God for one opportunity before squandering another one, Claudia settles down for a familiar night, Phil anticipates the completion of a nightlong quest, Frank conquers a created foe, and Linda finally snaps all over again. It’s a long sequence, and a long piece of music that might begin much earlier or end much later (the music is that locked in with the film), but when one thinks of Stanley’s final declaration, Phil turning around to hear Linda arriving, or Frank storming down the hall as Anderson's camera brilliantly falls in and out of focus, separating these elements from Brion’s work is impossible. 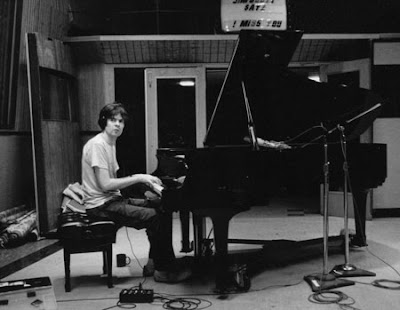 This accomplishment was clearly on Anderson’s mind as he went into Punch-Drunk Love, the epitome of what I’m getting at here. Various uncited sources claim that Brion began working on the score at the screenplay stage, so that throughout production, it would be the music that would unite the film thematically and emotionally. Throughout the film’s preparation and formal production, Anderson would hum little tunes he felt appropriate, and Brion would work from those. Like I said, these are uncited, but while viewing (and listening to) the film, this collaboration is palpable.

Indeed, the film plays very much as a musical without lyrics (save for the “He Needs Me” sequence) or dance numbers; certainly no characters break into song. If Anderson’s earlier films feel connected to Scorsese or Altman, Punch-Drunk Love is pure Jacques Demy, the director of The Umbrellas of Cherbourg and The Young Girls of Rochefort. In Cherbourg, music is so pervasive that every line in the script is sung. The music in Rochefort isn’t quite as pervasive, though unlike many musicals, the song-and-dance numbers don’t feel like separate creations inserted into a story. They feel instead as though they arise naturally, are truly part of the total cinematic experience.

So it is with Punch-Drunk Love. Though a character actually breaking into song would feel a tad forced, the music is as much the film as the cinematography, the performances, or the dialogue. Listening to the score on its own (an easy practice to fall into), you can feel the film happening around you, and if the film has its intended effect, the score is largely responsible. It can be melancholic, overwhelmingly frantic, joyful, pleasant, even a little jazzy, all emotions created inside the film, often through the music. Jean-Luc Godard once said, “To me, style is just the outside of content, and content the inside of style, like the outside and the inside of the human body—both go together, they can’t be separated.” Never has that quote meant as much as it does when reflecting on Punch-Drunk Love.

Ingmar Bergman said that Cries and Whispers started with the image of women dressed in white standing in a red room, and the rest of writing and preproduction was spent figuring out why they’re there. Music and the moving image represent the same creative process. They both start with an idea – an image or a sound that flutters by our consciousness. From these humble beginnings, films can be made with a single camera with no cast and a crew of one, or by a team of thousands. Music can be created by the simplest of instruments or the largest of orchestras. In most cases, each requires that initial, singular vision to be carried out by a team of people working towards a similar goal – the move its audience. It’s not so unnatural, then, that cinema and music be as intertwined as they now are, that the collaboration between the two forms could reach the heights it does in Anderson’s films.
at September 17, 2010