The Moon in the Gutter is coming to Region 1 DVD

A kind reader has brought it to my attention that Cinema Libre has signed up with Jean-Jacques Beineix to re-release his historic catalogue of films in the United States. This group includes my beloved The Moon in the Gutter, as well as Betty Blue and several of his other films. DVD's are expected to follow...no word on extras yet but, since Beineix is directly involved, I suspect we might get some real special treats. I am thrilled at this news and am so grateful that these incredibly special films are reappearing again, especially Moon in the Gutter, which hasn't been available in the States for more than twenty years.
at November 29, 2008 2 comments:

Email ThisBlogThis!Share to TwitterShare to FacebookShare to Pinterest
Labels: Moon In The Gutter, Nastassja Kinski

I have just completed my look at Jean Rollin's fourth feature film, 1971's Requiem for a Vampire, over at Fascination and invite anyone interested over to check out my multi-post tribute to the film. I will be beginning my look over there at the incredible The Iron Rose (1973) later this week. Thanks to everyone so far who has visited my side project dedicated to one of my favorite filmmakers.
at November 29, 2008 No comments:

The Royal Tenenbaums struck a deep emotional chord in me when I saw it opening day in 2001, and it has continued to resonate since. Wes Anderson's (and Owen Wilson's) moving family story of betrayal and redemption will be near the top of my list of favorite films of the decade when I present it at the end of 2009.
I adore the inventive covers that pop up throughout the film, and since I didn't include any in yesterday's post, I thought I would present five favorites now. 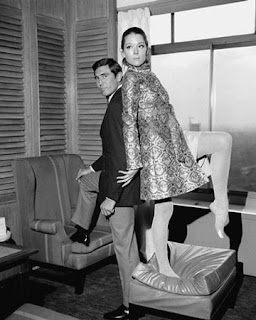 Thanks to everyone who voted in the poll based around James Bond in the sixties. I am surprised and thrilled to see that I am not the only one who considers On Her Majesty’s Secret Service to be among the great Bond films, as it did indeed finish number one. I would have ranked Thunderball much higher but otherwise the results are pretty spot-on with my tastes. Thanks again to those who participated and here are the final results:

The Return of Odessa 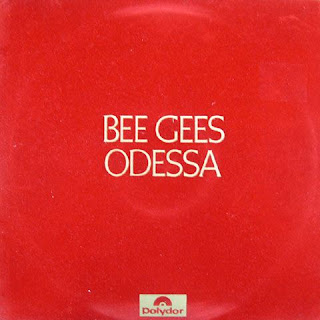 The Bee Gees stunning 1969 double album Odessa is finally getting the treatment it deserves early next year in a sure to be essential 3 disc set from Rhino. The reissue of one the most majestic albums of the sixties (or any other decade you care to name) contains the original iconic album in mono and stereo formats and has a bonus disc featuring a whopping 23 unreleased tracks. The unreleased material consists of demos, alternate mixes and some promotional material. Rhino's previous Bee Gees reissues of their masterful first three albums are among the most loving and comprehensive in my collection and I expect the same from Odessa. I just hope it doesn't take Rhino as long to deliver their work from the early to mid seventies, including what I think is The Brother Gibbs greatest triumph, 1971's Trafalgar.

***As a side note, if you have only heard the Bee Gees from the Saturday Night Fever period do yourself a favor and check out their pre 1977 material for some of the most sublime and moving British pop music of the rock era.***
at November 25, 2008 2 comments:

Images From My All Time Favorite Films: Wes Anderson's Rushmore (1999)

Into the Restricted Zone

Ah, that first R-Rated film in a theater. It’s kind of a defining moment in every kids life…sort of like some early introduction to adulthood or, at the very least, something to brag about to the other kids at school. My memories of my first venture into the restricted zone have been on mind after a conversation I had with my mom recently, so I thought I would share a few memories here.

It’s always been my memory that my first R on the big screen was none other than John Carpenter’s Escape from New York back in 81. Yep, I was kicking it with Snake Plissken just a month after my eighth birthday. The memory is forever cemented in my brain, as is the bragging I did to any kid I could get to listen to me for months after.

My mom alerted me to the fact recently that I actually saw The Exorcist as an infant with her and my father, so technically my first R in a theater was Friedkin’s classic shocker. The Exorcist, can you imagine? The news thrilled me, but I just wish I had known it sooner. Imagine the bragging I could have been doing all these years…

A few other early R memories are seeing Sudden Impact with my Aunt Kathy just past the age of ten in 83. Outside of being my introduction to Dirty Harry, the trip also marked the first time I had ever had what would eventually become my movie candy of choice, the mighty Milk Dud.

The first R rated film I ever snuck into alone was 1985’s terrific Creator, a film that remains among my all time favorites. My parents had dropped me off to see something else (a dreaded PG film no doubt) and while I can’t recall what that was, I can most definitely recall the impact Virginia Madsen had on my twelve year old eyes that day…I have still yet to fully recover from it.

Growing up in a very liberal house had its benefits, so by 13 or so there wasn’t much off limits (although I do remember getting in trouble for a late night viewing of De Palma’s Body Double in 86 or so). I always get a kick out of hearing recollections from folks about their first ventures into R rated features on the big screen, and still never tire of bragging of my time with Snake and The Duke back in the day.

***Partially inspired by Roger Ebert's reprinting of a moving article he wrote on Virgina Madsen and her family a year or so after Creator came out***
at November 21, 2008 10 comments:

A kind reader has brought it to my attention that Cinema Libre has signed up with Jean-Jacques Beineix to re-release his historic catalogue of films in the United States. This group includes my beloved The Moon in the Gutter, as well as Betty Blue and several of his other films. DVD's are expected to follow...no word on extras yet but, since Beineix is directly involved, I suspect we might get some real special treats. I am thrilled at this news and am so grateful that these incredibly special films are reappearing again, especially Moon in the Gutter, which hasn't been available in the States for more than twenty years.
at November 20, 2008 5 comments: 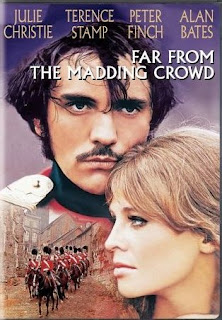 John Schlesinger's extraordinary 1967 Thomas Hardy adaptation Far From the Madding Crowd is finally set to hit Region 1 DVD on January 27th in a Widescreen, uncut version. No word yet on any extras but the welcome arrival of this gorgeous Nicolas Roeg photographed film starring Julie Christie and Terence Stamp in their prime is cause for celebration.
Speaking of the wonderful Thomas Hardy, it's terrific that several of his finest books have been given such fine screen adaptations. Schlesinger's film stands along with Polanski's Tess (1980) and Michael Winterbottom's Jude (1996) as bona-fide masterpieces in my book. I wish someone would tackle a big screen version of Hardy's haunting short story "The Withered Arm", as apparently there has only been a small screen BBC go at it so far.
at November 18, 2008 3 comments:

The Rather Odd Case of Gerald Arthur Otley

The prolific writing team of Dick Clement and Ian la Frenais got their start in the mid sixties on such cult British television series as The Likely Lads and The Further Adventures of Lucky Jim. Their first screenwriting credit for a major motion picture came with 1967's The Jokers for director Michael Winner, which garnered them much acclaim. Nowhere near as notable, but still worth a look, is their second feature film together, 1968's Otley.

Otley, a film Clement handles directorial duties on, tells the strange tale of Gerald Arthur Otley, a man perpetually out of work, out of money and, as the movie begins, without a place to live. Otley, played by the always excellent Tom Courtenay, drifts from one friend's pad to another and has no qualms about freeloading his way completely through life. One morning though he wakes up in the grass near an airport runaway and soon finds out that he is being framed for the murder of one of his hospitable friends. Soon after he finds himself caught up in a complex web of espionage, lies, and betrayal.

Otley is a comedy, or at least that is what it mainly attempts to be. It's not all that funny though, and mostly it just succeeds on its strangeness factor. Widely veering between satirical spy thriller, pedestrian romance, and droll character study, Otley attempts to squeeze a lot into its ninety minute running time.

The then novice director Clement is a better writer than filmmaker and Otley is rather flat feeling. Clement handles the material capably but his first film fails to ever really distinguish itself and is short on style throughout its running time. Luckily though the impressive cast keeps it compulsively watchable throughout.
Courtenay, an Oscar nominee and one of the great British actors from the past several decades, handles the material with ease and controls nearly every frame of the film. His witty performance manages to make Otley sympathetic and pathetic often at the same time and watching him is a pleasure.

While she is billed second in the film and before the title, lovely and talented Romy Schneider is virtually not in the first half and then only sporadically pops up in the second. Still, she shares a couple of terrific moments with Courtenay and, as always, is a wonder to watch.

Filling out the cast are a number of instantly familiar faces for fans of British cinema including the unforgettable Freddie Jones and future cult actress Fiona Lewis. Otley as a film never totally gels but the cast is impressive and all are in fine form.
Otley benefits from a nice relatively early score by future Deer Hunter composer Stanley Myers, and former Stanley Donen collaborator Austin Dempster captures the London of 1968 very well, especially with shots inside Notting Hill Gate's Tube Station and even a brief bit in London's Playboy Club.

Clement and le Frenais have continued to work together throughout the years and have delivered a lot of solid work. Their most recent film, The Bank Job, features one of the most enjoyable and tightest scripts of the past few years.

Otley isn't any kind of major lost classic but it's enjoyable and a DVD version would be welcome. Fans of British spy films in the sixties or admirers of Courtenay and Schneider will absolutely want to seek it out. My copy, from which these screenshots were taken, comes from an older British VHS and to my knowledge a DVD has never been released.
at November 18, 2008 4 comments: