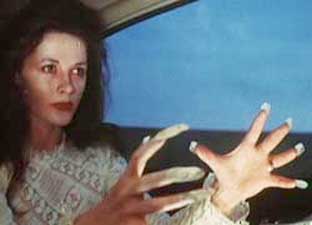 I was recently invited to submit a piece for Mondo Macabro's great blog focused on one of their past releases.  I chose Michel Lemoine's terrific 1976 feature Seven Women for Satan and my look at the film is now available to read for those interested.  Thanks to Jared over at Mondo for asking me! 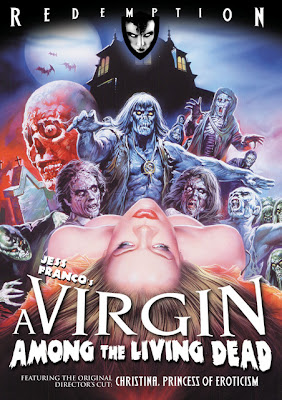 Among the finest creations found in the lengthy filmography of late Spanish auteur Jesús Franco Manera, and one of the most startling films of the seventies, A Virgin Among the Living Dead makes its Blu-ray debut this month via a terrific special edition from Kino Lorber/Redemption.
While I have often picked A Virgin Among the Living Dead as my absolute favorite Franco film I came to the work later than most of his others I first encountered through grey market VHS copies throughout the nineties.  For whatever reason, A Virgin Among the Living Dead wasn't among the Midnight Video or Video Search of Miami tapes, that Tim Lucas mentions on his tremendous new commentary track, that either me or my movie buddy Dave ordered back in the day.  While I had read much about this film I didn't finally get a chance to see any version of it until just over a decade ago when it first made its way to DVD as part of Image's Euroshock line.
I fell in love with Franco's hypnotic 1973 masterpiece during that first viewing in my late twenties.  Watching it that first time I felt like I was, in a way, collapsing into the film and all these years (and viewings) later it still mesmerizes me in a way that few fantastic works of art do.  It's a remarkably meditative work that is as compelling as it is strange and as surreal as it is oddly grounded.
Pulsing with a soothing narcotic feel punctuated at nearly every turn by Bruno Nicolai's absolutely gorgeous score, A Virgin Among the Living Dead is an incredibly singular experience.  While it was marketed both as a horror and sexploitation film during its various theatrical runs, A Virgin Among the Living Dead is very much one of the great European Art Films.  It's breathtaking in both its thematic scope and its punctuated brevity and it has a striking emotional core that is sadly missing from most modern 'genre' films.  A Virgin Among the Living Dead is among the richest and most rewarding films in Jess Franco's canon as well as being one of the most fully realized, a fact that is made all the more remarkable when one considers just how consistently tampered with the film was through the years.
Redemption's excellent new DVD and Blu-ray offers up A Virgin Among the Living Dead under the title Christina, Princess of Eroticism, the 79 minute cut of the film which is the closest we have to Franco's preferred version of one of his greatest works.  The disc also offers the infamous 'horror' version, as an extra, featuring all of the padded out Zombie footage French filmmaker Jean Rollin shot years later, which I wrote a bit about here at my Rollin blog.  The new disc also offers up some extremely strange 'alternate erotic footage' featuring Alice Arno, that would have been just as out of place in Franco's soulful work as Rollin's undead were.  While Christina, Princess of Eroticism is extremely close to Franco's original cut, it shouldn't be forgotten that A Virgin Among the Living Dead is still a compromised work, a sad fact that points to how much Franco had to work against throughout his combative career.
I am hesitant to write too much about A Virgin Among the Living Dead as it really is a work of art that needs to be experienced and I don't want to spoil anything for readers who might not have seen it before.  I will say that it has a number of images and moments that even if I had only seen once would have eternally stuck with me.  If I am ever asked what it is that I love so much about this particular period of esoteric European filmmaking A Virgin Among the Living Dead is one of the key works I would point to.   More importantly it is one of the pictures I would suggest to less adventurous film fans who still think of Jess Franco as a lesser, or even poor, filmmaker.  I defy anyone to watch this film and not be impressed by the amount of passion, skill and thought that can be found in each frame.
Redemption's new discs offer up the best looking print of the film to date.  While it is noticeably more grainy and scratchy than Image's older DVD it has a much more consistently vibrant and warmer feel throughout.  Skin-tones are much more natural, the day for night shots more sinister and the new disc has finally just a more cinematic look about it.  To go along with this struck from negative print we have three audio tracks; the preferred French, the atrocious English dub and the aforementioned Lucas commentary, which is among the best he has ever done.
Along with the alternate version and footage I mentioned earlier, Redemption's new discs have several other extremely valuable extras including trailers, a photo gallery and one of the final filmed interviews with Franco by David Gregory and Elijah Drenner.  Best of all are two featurettes from former Jean Rollin assistant Daniel Gouyette, The Three Faces of Christina (which chronicles the various different versions) and Jess! What are You Doing Now? (an incredibly moving tribute featuring friends and collaborators conjecturing on Franco's role in the great beyond).  All in all Redemption's new release of one of Jess Franco's key films is an absolute knock-out in every way and one of their best releases so far and can now be ordered from Kino, Diabolik and Amazon.