A Long Line of Crosses: Sergio Garrone's HANGING FOR DJANGO 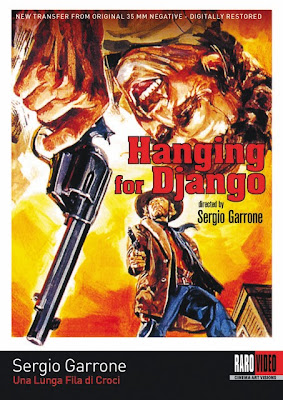 While he never gained the notoriety of many of his peers, director Sergio Garrone carved out a most interesting place in Italian Cinema history with just over a dozen films that spanned the late part of the sixties up into the early eighties.  A more prolific writer than director, Garrone's career behind the camera didn't begin until he was already in his forties.  He established himself, almost immediately, as both a filmmaker to watch and as a unapologetic trend-hopper in 1966 with his directorial debut, the Italian Western "Se vuoi vivere... spara" (If You Want to Live...Shoot).
From the get-go, Garrone's films had an strangely surreal and oddly oppressive feel about them.  His filmmaking touches were wonderfully rough around the edges but there were striking signs of finesse and style.  In his best films, such as 1969's "Django il bastardo" (Django the Bastard), 1974's "Le amanti del mostro" (Lover of the Monster) and his infamous S.S. Camp movies of the late seventies, Garrone created  frenzied hallucinatory works that still sets him apart from more recognizable genre giants.  Simultaneously jarring and oddly poetic, Garrone's best moments behind the camera had an urgency that stood with some of the finest Italian exploitation works of the seventies.  One of Garrone's key, if little-seen works, 1969's Una lunga fila di croci (Hanging for Django) is getting ready to make its Blu-Ray premiere here in the states via a fine edition from Raro Video and Kino Lorber.
Operating as both a seriously sympathetic portrait to the plight of Mexican Immigrants in the old west as well as a deliriously violent exploitation picture with an absolutely dizzying number of gunfights throughout, Hanging for Django is one of Sergio Garrone's more striking and, relatively speaking, sedate works.  While not as nightmarish as the more well-known Django the Bastard, nor as off the chain as his later Naziploitation films, Hanging for Django still casts its own very distinctive spell.  Featuring a number of beloved genre icons, including Anthony Steffen, Nicoletta Machiavelli, Mariangela Giordano and a terrific William Berger (who delivers one of his best screen-performances as a bounty hunter preacher named Murdoch) Hanging for Django might not stand with the best European Westerns ever made but it has a number of great moments that will surely delight fans of the genre.
While the cast alone would have assured that Hanging for Django was a fully-loaded production the real stars of the show are editors Cesare Bianchini and Marcello Malvestito, whose superlative cutting work here is unbelievably creative and consistently surprising.  The duo's wildly audacious editing services Garrone's off-kilter, and often unexpected, angles and framing incredibly well.  Hanging for Django suffers at times, due to a rather pedestrian script from Garrone (centered an admittedly intriguing premise) and a clearly lower than needed budget that hampers a number of interior sequences, but it is a good film and its return is very welcome.
Bianchini and Malvestito aren't the only great behind the scenes artistic duo fuelling Hanging for Django as strong words of praise must go to cinematographer Franco Villa (who would shoot a number of the seventies great Italian genre films) and the legendary Aristide Massaccesi (Joe D'Amato) whose work here as a camera operator is extraordinarily ballsy (check the incredible mid-film gunfight where D'Amato expertly (and literally) flips the camera to match the action creating one of the most exhilarating moments I have seen in some time.
Hanging for Django is ultimately a good film made up of a number of truly great moments (Berger's eerie introduction is particularly mesmerizing) but it never quite reaches the excellence of the finest European westerns of the period.  The pros far outweigh the cons though and I would recommend it without reservation to even casual fans of the genre.
Raro's new Blu-ray is absolutely beautiful.  The print is immaculate and both the English Dub and Italian language track are wonderfully preserved and presented.  The excellent quality of the disc perhaps, at times, makes the films low-budget a bit more transparent than it needs to be but Raro and Kino have done an impressive job here.  Two extras are available with the first being a small unattributed booklet and the second being a featurette entitled "Bounty Killer for a Massacre", which is in reality a 2007 fifteen minute chat with author and film historian Manlio Gomarasca.  The disc will be released later this month and can be ordered at the links above, at Amazon or at any number of your preferred retailers. 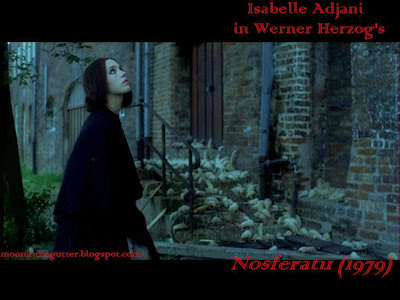 HAPPY OCTOBER EVERYONE!  Here's to a frightfully awesome month!