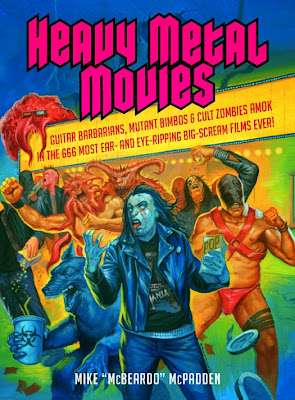 An incredibly entertaining, and compulsively readable, book from journalist and former Hustler editor Mike "McBeardo" McPadden, Heavy Metal Movies is the newest epic tome from the great folks over at Bazillion Points and it is another knock out of the park. Coming in at well over 500 pages, this massive tribute to the sometimes surprising connections between films and heavy metal comes with the fitting tagline, "Guitar Barbarians, Mutant Bimbos & Cult Zombies Amok in the 666 Most Ear-And Eye-Ripping Big-Scream Films Ever!"  and it more than lives up to that ambitious promise. Brooklyn born McPadden worked for years researching and writing Heavy Metal Movies and the effort paid off as this is one of the most entertaining and exhaustive books on film in recent memory. Far from an overtly serious or critical guide, Heavy Metal Movies is a wonderfully humorous and witty work that is as engaging as many of the wild cult and exploitation films it covers. While McPadden's style is breezy and personal, make no mistake this is a guy who knows his stuff and many of the connections he makes in Heavy Metal Movies are both eye-opening and unexpected. Featuring hundreds of black white images, with a very striking color section, the layout of Heavy Metal Movies is a simple, but effective, A to Z listing of the 666 films that in some way or another have a connection to Heavy Metal music. The connections range from the very subtle to extremely strong and while some of McPadden's choices might seem odd his reasoning is almost always sound. While the tales of musicians who have been influenced by specific films are fascinating what I really like about the book is McPadden's way of making the reader perhaps look at a film they thought they knew as well as possible in a slightly different way. That said, the one flaw the book has is that it is at times a bit too far reaching on certain titles (should something like Jawbreaker be included just because "Rock Me Like a Hurricane" is featured) but that's a very small complaint as this is a very pleasing book that a lot of obvious love and work was put into. Heavy Metal Movies also includes a lively introduction by McPadden, Alice Cooper discussing his favorite 'Metal' film and some audacious lists focusing on things like the most Metal moments in movie history. Order it directly from Bazillion Points and get a limited color sewn patch (that you can slap on your cut off jean jacket next to your Iron Maiden and Angel Witch logos). Copies can also be obtained from Amazon and other online retailers.