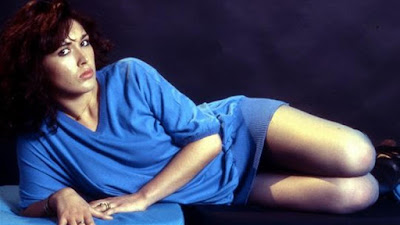 When Lilli Carati tragically passed away, after a long battle with Brain cancer, just before Halloween in 2014 the Italian genre cinema lost one of its most fascinating and mysterious stars. Born Ileana Caravati in Lombardy, Italy in 1956, Carati grew up loving the arts, film and music and began working as a model as a teenager. Before she was even twenty, Carati was appearing in a number of Italy's most popular magazines and in 1975 she was nearly crowned Miss Italy. 1975 is also the year that she would first begin her soon to be blossoming acting career with a brief appearance in Sergio Corbucci's anthology film Di che segno sei?. Carati quickly became an in demand figure in the Italian film industry and throughout the mid to late seventies she appeared in a slew of pictures ranging from Italian Sex Comedies to Police Action works. Carati was beautiful and vivacious and by 1978 was even beginning to attract some filmmakers in the art house world such as Lina Wertmüller, who cast her in a small role in her 1978 production A Night Full of Rain. It was a different 1978 production that Carati would most be remembered for though in a film as far removed from Wertmüller's world as imaginable.

Fernando Di Leo's To Be Twenty remains one of the most disturbing and shocking films of the seventies, mostly due to a vicious ending that will leave even the most jaded genre film fan reeling. Carati, along with her co-star Gloria Guida, gives an unforgettable performance and the film remains the high water mark of her career. To Be Twenty is a troubling work but Carati really shines in the film with a performance that is funny, provocative and very sexy. Following Di Leo's controversial work Carati would continue working throughout the eighties but personal problems coincided with a dying Italian film industry and by the end of the decade Carati found herself broke, depressed and desperate...three factors that led her into hardcore work that she clearly didn't want to be doing. Disillusioned by the film industry she had once so much loved, a heartbroken Carati all but retired in the early nineties and disappeared from the public spotlight nearly for good.

According to the liner notes of the inaugural Blu-ray/DVD set from Reel Gore Releasing Violent Shit, Italian filmmaker Luigi Pastore tracked Carati down in 2012 and "attempted to revive her career" with a role specifically written for her in his Dorian's Dark Fairytale. Sadly, Carati became very ill around that time the first footage was shot and "Pastore was unable to complete the film without her." Thankfully, as a tribute to her memory, Pastore decided to use the footage in his newest film, Violent Shit, and Carati's final moments on celluloid can now be viewed on Reel Gore's extravagant first release. Fans, like myself, can also watch the final moving interview that the still glowing Carati gave before she became sick, on the set's exhaustive special features, where she is clearly excited and happy to be returning to film. The interview is a poignant viewing experience and is a highlight of Reel Gore's first release.

As a film, Violent Shit is a bit all over the place. An updating of the notorious no budget German shocker, Pastore's film is meant as a tribute to the great Italian Giallo productions of the seventies and eighties and is filled with as many references and cameos as it can pack into its under 90 minute running time. Fans of the genre will no doubt have a blast trying to catch all of the references, which range from the obvious to the sly, but the film doesn't really go anywhere until its final half hour when it finally does live up to its title with a series of vicious killings that will prove very pleasing to both gore hounds and special effects enthusiasts. David Bracci's old-school practical effects are the major pleasure the film offers along with the very pleasing, if plundering, Claudio Simonetti soundtrack, which is thankfully included as a CD Bonus. 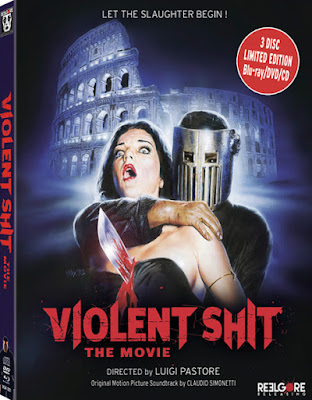 While the film is only marginally succesful, Reel Gore's delivery of it is out of this world. Arriving as a 3 disc set, with a lavish full color booklet, Reel Gore have announced themselves as a major new player on the home video scene with this release. Containing interviews, documentaries, trailers, a collectable card and the aforementioned soundtrack, Reel Gore's release of Violent Shit is among the most noteworthy of the summer. Issues with the film aside, all of the supplements are fascinating to watch and the Simonetti soundtrack is a strong and vibrant listen. Cult Epics founder Nico B and film producer Steve Aquilina’s new horror label is one to watch and their second packed release, Masks, is just around the corner.
More information on Reel Gore can be found at their official site, Facebook, Twitter and YouTube.