Born in the Spanish capital region of Palma in the spring of 1953, Agustí Villaronga came from a family of artists who encouraged the young man to follow suit, with his father being primarily instrumental in getting Villaronga interested in film. While all aspects of the craft would fascinate Villaronga, dreams of directing powered his teenage dreams that led to a life in cinema.

Villaronga's decades-long career in film started in the mid-seventies when he began working in various capacities across the Spanish film industry. His first short film as a director, Anta mujer (1976), showed his interest in the supernatural from the outset of his career. He would complete several more shorts before his dazzling feature-length debut, In a Glass Cage (1986) that established him as one of the most interesting Spanish directors of his generation.

The powerful Moon Child (1989) followed up In a Glass Cage, proving just as spellbinding. Both In A Glass Cage and Moon Child were unforgettably distinctive and striking works wholly removed from other similar-minded films from the period. Sadly, the years following Moon Child would prove frustrating for Villaronga, who struggled to release a follow-up. This would finally change in the mid-nineties with a startling supernatural mystery entitled 99.9 (1997). 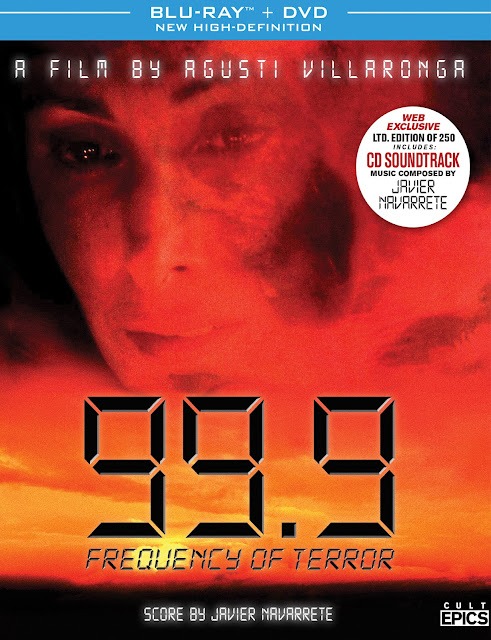 Centering on a radio talk-show host attempting to discover what was behind the mysterious death of her lover, 99.9 stands as one of Villaronga's most compelling works and one of the best supernatural thrillers of the nineties. Starring the brilliant Goya-winning actress María Barranco, 99.9 is a highly engrossing experience powered by great performances across the board and Villaronga's intelligent directorial skills.

99.9 is a methodical work that bravely takes its time in a cinematic era where that was going against the grain. Wonderfully slowly paced, the film builds and builds in intensity throughout its 105 minute running time, all the way guided by Barranco's powerful performance.

By the mid-nineties, horror films were becoming more and more quickly paced and less intelligent in equal parts, making 99.9 stand out. Much of this is due to the film's skillful editing, realized by multiple Goya winning Pablo Blanco, who had just finished his extraordinary work on Álex de la Iglesia's Acción mutante (1993).

The look of 99.9 is particularly vital to its success as well. Perhaps the biggest strength of the film is the photography by the legendary cinematographer Javier Aguirresarobe. Spanish born just after World War 2, Aguirresarobe has recently found great success with major Hollywood blockbusters like the Twilight saga and some Marvel films. Capable of highly varied work (such as Woody Allen's Blue Jasmine), Aguirresarobe lends a unique visual touch to every film he has photographed, and 99.9 is no exception. Within just a few years of 99.9's release, Aguirresarobe would land Alejandro Amenábar's mesmerizing ghost story, The Others (2001), which set in motion his incredible career in Hollywood these past couple of decades. It is his Spanish work on films like 99.9 that remains the purest example of his excellent skills.

Out of print for years, 99.9 has recently been re-released by Cult Epics via a terrific new 2K scan direct from the original 35mm negative, and the results are stunning. The Blu-ray/DVD combo also contains some eye-opening extras, including a vintage making-of documentary subtitled in English for the first time. Also included is a new interview with Villaronga, the isolated unreleased score from Javier Navarrete, and a trailer gallery. Cult Epics had previously released a special edition of Moon Child, making this new version of 99.9 a most welcome one indeed.