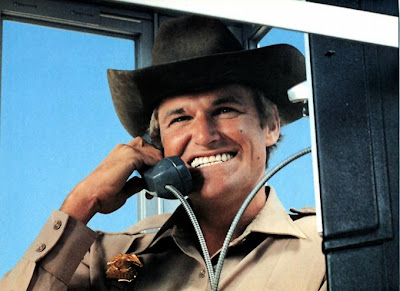 By the early seventies, Kentucky born Charles Napier was pretty much fed up with acting.  He had been working steadily in film and television since the late sixties but, as he was approaching forty, he was bored with performing and had began working for a trucking magazine called Overdrive.  Napier's biggest champion, legendary filmmaker Russ Meyer, had a new part in mind for Napier though and courted the imposing actor back into cinematic playing field with what Meyer biographer Jimmy McDonough would call "the greatest role of Charles Napier's weird career." in his essential Big Bosoms and Square Jaws.

Watching Charles Napier's incredibly jolting and terrifying performance as Harry Sledge in Meyer's masterpiece Supervixens (1975) today it is impossible to imagine any other actor in the role. Channeling an extreme misogynistic macho-male energy passed the point of wrong into the realm of psychotic, the six-foot Napier is beyond imposing as Sledge...he's positively monstrous and, more importantly, absolutely brilliant.  Harry Sledge is the kind of role most actors would have run away from, or at the very least attempted to soften, but Napier inhabits it completely and devours the screen in one of the most ferocious performances in film history.

Supervixens is a dazzling work by an angry artist looking to show that he still had at least one major masterpiece left in him and he didn't need any damn studio backing to deliver it.  Meyer's film is a breathtaking and brutal experience and it contains his most astonishing momenst as a filmmaker (and, perhaps most importantly, editor) during the legendary bathtub fight sequence between Napier and stunning Shari Eubank (whose work in Supervixens could have appeared on this list as well).  The sequence, which would serve as inspiration for an equally brilliant fight between Patricia Arquette and James Gandolfini in Tony Scott's True Romance year later, is absolutely jaw-dropping not just for its brutality and ugliness but also for just how technically brilliant it is and how incredible both Napier and Eubank are.  It's an absolute stunner.

There is really nothing else in cinema quite like Supervixens and there has never been anything quite like Charles Napier's performance as Harry Sledge.  The role and film would re energize Napier's passion for acting and he would go onto have one of the most prolific careers in all of modern film and television.  He worked right up to his death in 2011 and he remains one of the great cinematic gifts my state ever offered up.

More of my thoughts on Supervixens and Charles Napier's work as Harry Sledge can be read in the upcoming Directory of World Cinema:  American Independent 2, which is due out in January for those  interested.