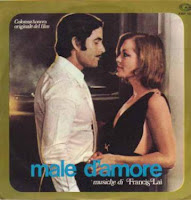 Throughout the next day or so I will be paying tribute to the late Jean-Claude Brialy with a series of posts consisting of both pictures and text. I want to celebrate this man's incredible career which consisted of almost 200 films and spanned over fifty years.
A true icon and and a shining light in the films of the French New Wave, the man appeared in so many of my favorite films it is hard to know where to begin. So I thought I would start with a nod to Brialy behind the camera. Starting with 1971's EGLANTINE Brialy directed six feature films as well as an additional 6 television productions. I haven't seen the majority of these so the following details are sketchy at best. I was always blown away by the fact that Brialy, who was so prolific with his acting career, had time for anything else.
Here are some brief notes and images for some of Brialy's work as a director.

EGLANTINE won the Silver Seashell Award at the San Sebastian International Film Festival and starred the aging French actress Valentine Tessier as a Grandmother who is being visited by her two young grandchildren. This period film garnered some acclaim upon release and signaled Brialy has a talent to watch behind the camera. It was unfortunately never released in Britain or the United States and appears to be out of circulation even in France.

His next film as director, LES VOLETS CLOS (CLOSED SHUTTERS) did apparently receive a brief US theatrical release. The only information that I could find on this film comes from the all movie guide and it states, "Thomas (Jacques Charrier) is a sailor who has deserted from the Navy in this gentle French drama. He has found refuge in a seaside bordello. Romantic difficulties blossom as he and Flora (Catherine Rouvert), one of the house's prostitutes, fall in love with each other. When he hurts her, however, the denizens of the house agree that he must leave."

Brialy was the writer as well as an actor in his next film, the comedy L'OISEAU RARE (A RARE BIRD). This film also featured a young Anny Duperey and focuses on a chauffeur attempting to find suitable employment. The film was well received in Europe upon initial release but has since, unfortunately, follow under the radar.

His next film as director would be his most famous and the one I have seen, although it has been awhile. UN AMOUR DE PLUIE (LOVING IN THE RAIN), which he would also help write and act in is mostly remembered for the great performannce of the lovely Romy Schneider. Brialy and Romy had worked together before and had of course known each other for years. This striking film features Romy at her most stunning and remains the best film Brialy directed as well as the easiest to find. I hope to revisit it soon and will hopefully have more thoughts on it in the future.

After a 1979 television film Brialy the director returned with LES MALHEURS DE SOPHIE, a film that like EGLANTINE would focus on children. This 1981 feature was adapted from a classic French tale and received mixed reviews upon opening but a home video release in France is apparently not hard to find.

A handful of television films would follow but Brialy would return to the big screen just one more time with 1983's UN BON PETIT DIABLE which reunited him with the talented Bernadette Lafont. Lafont and Brialy had both came to fame starring together in Chabrol's classic 1958 film LE BEAU SERGE so this film must have been a nice reunion for them. Brialy again co-wrote the screen adaption of a classic French tale of children and again the film received mixed notices.

While not as awe inspiring as his work in front of the camera, I thought paying a small tribute to Jean-Claude Brialy's work behind the camera would be a different but worthwhile place to start. I would like to have the opportunity to see these someday and hopefully they will eventually become more available. Highly recommended is the Romy Schneider film LOVING IN THE RAIN which showed Brialy as a talented director with a great eye for beauty and composition.

My tribute to the late Jean-Claude Brialy will continue tomorrow.
at May 31, 2007

I'm not very familar with Brialy's work as a dierctor at all. It's a shame that more of his films are not on DVD. Now with him gone, someone will probably release them in an effort to make a buck but obviously there will be no commentary DVD tracks or interviews with him.

Thanks for the comment Kimberly, definately check out the Romy Schneider he directed if you get a chance. It's great....