The Argento's Take Over Cannes 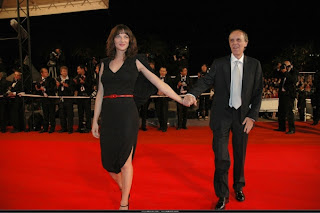 Here are a few shots, from the always great and exhaustive Ode To Azia website, of Dario and Asia just a few days ago at the Cannes Film Festival. They are attending the premiere's of the newly restored SUSPIRIA as well as one of Asia's newest films.
Asia has an incredible four films premiering this year at Cannes with a fine slew of directors including Dario, Abel Ferrara, Catherine Breillat and Olivier Assayas.

I must say that after their much publicized troubles it is great to see these two looking so happy together and supportive of each other. Is there a cooler father and daughter team on the planet?
I haven't heard how the reception to SUSPIRIA went or what exactly is restored about it but I can't imagine anyone seeing it on the big screen and not being totally blown away.

Of Asia's four new films, I believe Assayas' BOARDING GATE and Breillat's UNE VIEILLE MAITRESSE are in official competition while Ferrara's much anticipated GO GO TALES and secions of Dario's MOTHER OF TEARS are screening out of competition. I might have that a bit backwards but I think that is the set up. Either way it is a great thing to see Asia in four high profile films by respected director's at an otherwise pretty dull, from what I have heard, festival this year.
Many more pictures from Cannes over at Ode To Azia which is linked to the right.

Thanks for sharing these great pics! They look like they're having a good time at Cannes.

I have to disgaree aboute the films showing at Cannes this year though. I'm personally really excited about the new Coen Bro. new movie No Country for Old Men and Anton Corbijn's first full-length feature Control, which is about the life of Joy Division's Ian Curtis. Both films have gotten some impressive reviews.

As for the new film in the Argento 3 Mother's Trilogy... I'm afraid that my expectations are low since the last movie he made that I really loved was Opera. I thought there was some okay stuff in Sleepless & The Card Player but nothing he hasn't done before and better. Hopfully he'll be back in top form.

I forgot that Ian Curtis film was premiering and I have really been curious about that...love Joy Division. I was probably too quick to call the festival boring, I think it was the muted reception "My Blueberry Nights" got that put that in my head.
I'm not sure why I am so responsive to Argento's most recent work. "The Stendahl Syndrome" is a real favorite and I also admire "Sleepless" and "The Card Player".
I do share your hope that he is in top form with "Mother Of Sorrows"...as always thanks for reading and the comments Kimberly.

Thanks for posting this. I'm a huge fan of both Dario and Asia. Dario is one of my favorite directors in horror and suspense. I love "Suspira." It's an amazing piece of work. Some of his other projects, especially lately, have been hit and miss. Did you see his episodes on Showtime's "Master of Horror" serious? I love Asia. She's so gorgeous. She's sexy in a dangerous sort of way. I've enjoyed many of the movies I've seen her in, whether they've been with her dad or not. This is one cool father and daughter. I would love to spend some time with them.

Thanks for the comments...always good to hear other nice words about Dario and Asia....thanks for continuing to read and visit.

I can't help it, but I'm looking forward to MOTHER OF TEARS. Even if my reactions to SLEEPLESS and THE CARD PLAYER were somewhat mixed, I still stand by the feeling that THE STENDHAL SYNDROME is near-brilliant. Asia is just so beautiful...seeing these photos bring a big smile to my face.

Thanks Mr. Peel,
I am excited too. I am really trying to lower my expectations for it but it is difficult for me to do.
I agree with you about "Stendahl Syndrome"...it's actually one of my favorites of his and I think Asia is just brilliant in it.
Thanks for your comments and for reading....by the way, that is one of the coolest Avatars ever. You, Cinebeats and Rogue Spy have convinced me that I need to track one down as all three of these are just great.

Just checked your blog Mr. Peel...it's looking great. "Night Moves" is one of my all time favorite films...I am going to add it to my links list.

I've never seen "The Card Player." I've wanted to, even though I've heard bad things about it. Heck, I heard negative reviews of "The Stendhal Syndrome" and I enjoyed it. Thanks. I'm glad you do like my avatar. I like the ones used by Cinebeats and Mr. Peel. You do need a really cool avatar.

Well since my bias for modern Argento is out it probably isn't a surprise that I highly recommend "The Card Player". While not one of his greatest films I think it is right behind "Stendahl" and "Sleepless" as the best of his newer works.
It feels quite different than many of his films and it's definately not perfect but the look of the film (shot by Irreversible' Benoit Debie) is really striking, and I think the lead performance by Stefania Rocca is among the best in any Argento film.
So give it a look but don't go in expecting something on par with "Suspiria" or "Tenebrae"

thanks again for the comments...

Thanks for all the kind words you left here and over at my blog. I feel like it's still a work in progress but I really appreciate it.

No problem Mr. Peel,
It's looking great and I like a lot of films you ae covering...always excited to see that "Night Moves" has another fan....thanks again.

I attended the Cannes screening of Suspiria and I can tell you that it went down very well (of course the room was full of the Italian press so maybe an easy audience :) ) - it did look astonishing. Both Dario and Claudio attended, and received standing ovations: bother very proud, the latter fighting back the tears ... Certainly the best received movie of the films I saw.

Thank you Dariel for the report on the Cannes screening. I am envious you got to see it and am extremely happy to hear that it went so well for Dario.
Thanks for visiting, reading and for the great comment.