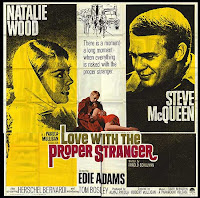 With the rumor of a Natalie Wood box set coming next year a logical question would seem to be where in the world is LOVE WITH THE PROPER STRANGER? Robert Mulligan's film was nominated for five academy awards, two Golden Globes and features two of the best performances of Natalie Wood's and Steve Mcqueen's careers.

The film, with it's striking black and white Milton Krasner cinematography, and great Elmer Bernstein score was pretty controversial in its day and perhaps the abortion topic is causing its delay on disc. Or perhaps, and more likely, it's just another classic film that Paramount is dragging its heals on. Either way it is a moving, well acted and directed film that is ripe for rediscovery. 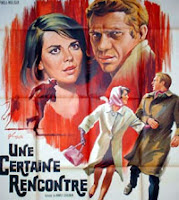 It would unfortunately be the only time Natalie and Steve appeared in a picture together. These two great icons work wonderfully well throughout the picture and it would be a great tribute to both of them to not only give the film a dvd release but a proper special edition. I have read about and seen bits of various promotional on the set footage that could be included and any current thoughts from Mulligan, or writer Arnold Schulman would be most welcome. Unfortunately producer Alan Pakula who was so actively involved in the creation of this extraordinary picture passed away in 1998.
LOVE WITH THE PROPER STRANGER is currently out of print in all formats and rarely pops up on tv anymore. Used copies of the VHS and laserdisc pop up often on Ebay and Amazon.