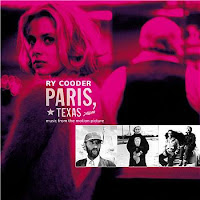 Ry Cooder’s PARIS, TEXAS is one of the great memory albums. It is perfect for a late night of drinking while remembering someone you’ve lost. It is also equally fitting for the next foggy hung over morning when all you can think about is that you live in the past too much.
Not just one of the best soundtracks of the eighties, Cooder’s work for Wim Wender’s loneliest masterpiece is one of the essential albums of the period. Like Harry Dean Stanton’s Travis, the wounded traveler surveying the ruins of his life in Wender’s film, Cooder’s music is mysterious, haunting and crushing in just how genuine it is.
Produced and recorded by Cooder at the famed Ocean Way Recording studio in Los Angeles with the help of famed musicians Jim Dickinson and David Lindley, PARIS, TEXAS is a deceptively simple work that becomes more and more resonate and complex with each listen. 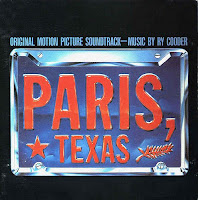 Cooder’s celebrated slide guitar work dominates the album, but it is the touches in the background that resonate long after the needle has lifted off the groove. Whispers of acoustic guitars, fiddles, voices and tinkling pianos appear throughout, all seeming to offer Cooder’s remarkably lonely sounding guitar some company. Like Travis in the film, there always seems to be something or someone just off in the distance offering help, or at the very least…some layer of solace in the solitude. 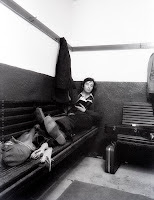 The Los Angeles born Cooder was born in the early part of 1947, and began to make a name for himself in the sixties with some guitar work for Taj Mahal. Later recordings with the legendary Captain Beefheart’s Magic Band helped push Cooder into the ranks of the most respected guitarists of the sixties. He soon found himself working with The Rolling Stones on some of their best late sixties work, and he began his influential solo career in the early part of the seventies.
Cooder has worked with everyone from Van Morrison to Van Dyke Parks, and his music has remained invigorating and necessary for over forty years now. PARIS, TEXAS is widely considered one of his great statements, and it has had several different releases worldwide since its first release in the mid eighties.
Jim Dickinson is one of rock’s most respected and influential players. He has been had his hand in everything from the Rolling Stones WILD HORSES to Big Star’s numbing THIRD/SISTER LOVERS masterpiece. Guitarist David Lindley has worked with Cooder many times, and his great fretwork can be heard on many recordings from artists ranging from Bob Dylan to Linda Ronstadt. The team of Cooder, Dickinson and Lindley on the PARIS, TEXAS sessions is an absolute dream, and all of them should be commended for their masterful playing. 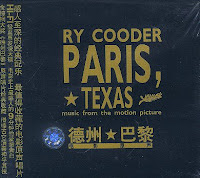 The album itself is mostly made of short, but powerful instrumental pieces. There are two exceptions: one being a lovely traditional Spanish number called CANCION MIXTECA, and I KNEW THESE PEOPLE, featuring the famed Sam Shepard monologue that Stanton says to Nastassja Kinski towards the end of the film.
Cooder is credited as writer on all the tracks with the exception of the traditional number and the devastating final track, Blind Willie Johnson’s DARK WAS THE NIGHT. Cooder’s playing on this last song represents some of the finest slide guitar playing ever recorded. The sound of Cooder’s strong and bold hands working their way up and down the neck of his instrument is spine tingling stuff, and it is damn near impossible to shake.
PARIS, TEXAS is currently in print domestically and can be found fairly easily. However the most essential version is an out of print remastered version from England, which featured improved sound, photos and liner notes. It is the ideal one to find, but all versions are rewarding and essential.
Much like the performances of Harry Dean Stanton and Nastassja Kinski in Wender’s majestic film, the music that Ry Cooder recorded for it will live on as long as people still have the capacity to search their memories for something they have lost…and perhaps even to find it… 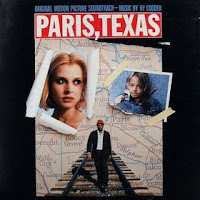 Great review of an essential album. I'd say the film itself represents Wenders' finest work, and the album perfectly describes the on-screen events.

Thanks Steve,
I appreciate the nice words, abd agree that this is Wender's finest work...and that is saying a lot.
Thanks again...

This film is Wender's best work in my opinion as well. This wonderful album by Ry Cooder is a brilliant companion piece to it. It's a beautifully haunting album. One of my older cousins has this album. I love it. It's great when a film and soundtrack go so well together.