Natalie Wood has been criminally neglected on dvd since the format came into being, with only a handful of her best films available. Hopefully next year that will began to change as a rumored release is the box set, THE NATALIE WOOD COLLECTION. This box will feature a new special edition of SPLENDOR IN THE GRASS, the new to disc INSIDE DAISY CLOVER and the delightful SEX AND THE SINGLE GIRL.
Richard Quine's SEX AND THE SINGLE GIRL is another one of those films that I first caught as a teenager on late night tv. Each week I would get out the Tv Guide and go through and circle all the films I wanted to tape. Natalie Wood has been a favorite for as long as I can remember and I was probably around 13 or 14 the first time I saw this film.
Quine was a remarkably underrated director who excelled at making romantic comedies with a style and flair that few could match in the fifties and sixties. He was also a master of of sly black comedies with films like THE NOTORIOUS LANDLADY and especially HOW TO MURDER YOUR WIFE. I think Quine has never quite received the recognition he deserves due to the fact that film buffs often look down upon the type of films he made and the American film period from 58-68 in general.
Quine brings his usual visual and stylistic flair to the zippy SEX AND THE SINGLE GIRL. A near two hour film that feels like the breeziest 90 minute comedy you can imagine highlighted by an incredible Neil Hefti score and sharp colorful cinematography by the legendary Charles Lang.

SEX AND THE SINGLE GIRL started out life as a Helen Gurley Brown expose on...well...sex and the single girl. No less than five screenwriters worked on not so much as adapting Brown's book but making it a part of the film with Natalie Wood playing Brown herself.
Natalie Wood is joined by an incredible cast including Tony Curtis as the sleazy tabloid journalist Bob Weston who is out to prove she isn't quite the liberated woman she claims to be. Also featured are Hollywood legends Henry Fonda, Lauren Bacall and Mel Ferrer. Two scene stealer's in what could have been just decorative roles are the very funny Fran Jeffries and Leslie Parrish. Fran Jeffries is particularly good and sings two songs on the highly collectible Hefti soundtrack, which is one of the snappiest of the sixties. 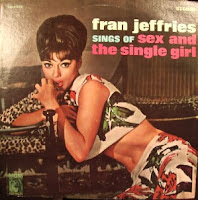 The whole cast is at the top of their game here. Tony Curtis was at his absolute comic peak in this film and he is incredibly sharp and funny. One of the film's most hilarious moments has Curtis parodying his role in SOME LIKE IT HOT with a barely maintaining Wood asking him, "Has anyone ever told you that you look like Jack Lemmon?"

Fonda and Bacall have many great scenes together as Curtis' constantly bickering friends, Frank and Sylvia. Fonda is very good here as a man equally obsessed and jaded by his profession, namely designing women's undergarments.
The film ultimately belongs to Natalie Wood. Looking absolutely radiant and as funny as hell. It's especially important to view this role in context, as she had just come off the extremely dramatic LOVE WITH THE PROPER STRANGER. The emotionally trouble Wood hopefully had a good time filming SEX AND THE SINGLE GIRL, she certainly appears to. Despite all that she was going through in her personal life Natalie gives a sly, winking performance that is among the best comedic turns of the sixties and it is a perfect reminder of how diverse she could be. 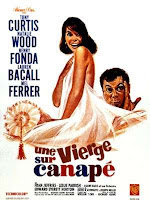 SEX AND THE SINGLE GIRL was released in 1964 to okay box office business and mixed reviews. Like many films from the sixties it seems caught between older values and the many changes that the culture was getting ready to go through. It couldn't have been made five years before or five years after, it is a quintessential film of its time.

Richard Quine would unfortunately not be able to deliver too many quality films after SEX AND THE SINGLE GIRL. He sadly took his own life at the age of 69 after enduring a series of tragic and traumatic events. His work as a director needs more attention with films like BELL BOOK AND CANDLE and STRANGERS WHEN WE MEET being particularly great reminders of his importance and talent.
Tony Curtis would in the few years after SEX AND THE SINGLE GIRL deliver some more comic gems, especially the great DON'T MAKE WAVES, before surprising everyone with his convincing turn in THE BOSTON STRANGLER. I hope he is on hand for the supplemental material on the upcoming SEX AND THE SINGLE GIRL dvd.

We lost Natalie Wood in 1981 at the heartbreaking young age of 43. With SPLENDOR IN THE GRASS and LOVE WITH PROPER STRANGER serving as reminders to how great of a dramatic actress she was then SEX AND THE SINGLE GIRL can be viewed as a testament to her comedic strengths. Deserving of a posthumous Oscar no one was ever loved more by the camera and her fans than Natalie.

SEX AND THE SINGLE GIRL is currently out of print in any format. Used VHS and laserdisc copies sometimes pop up on Amazon and Ebay and a fine widescreen print plays pretty often on TCM. Long undervalued, this very charming, warm and funny comedy will hopefully find a new audience next year.

Another terrific post Jeremy! I'm nutty about Natalie and now you've got me all excited about the possibility of a Natalie Wood box set.

I've only seen about an hour of Sex and the Single Girl, but I'd love to see the whole movie. Since I don't get TCM I'm obviously missing a lot of great old films.

Another one of my favorite Natalie Wood films is Sydney Pollack's This Property is Condemed. It's such a tragic film, but I adore it. I think I need to see it again and write about the movie soon. After posting that pic of Redford (her co-star in the film) and Pollack at Cannes I started thinking about the movie again and after reading your post I can't get it out of my mind.

I love This Property Is Condemned also. I didn't know about the box set either, I just happened to stumble across the news when I was planning the post. I really hope the box happen, Natalie was one one of the great stars and deserves a lot more than she has gotten.
Thanks for the comment...you should do a This Property is Condemned post. I would love to read it...also I can't remember which Natalie bio it is but Redford is interviewed in one of them and he is very complimentary towards her. In fact he basically credits her with kick starting his screen career from what I remember...