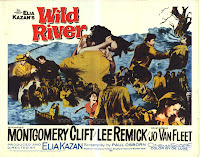 Sometime during the night of May 12th 1956 one of the most beautiful faces of the century was being held in place by Elizabeth Taylor, after a tragic car crash all but destroyed it. The stories of Montgomery Clift, after the crash, in the last ten years of his life are legendary for how unbelievable sad and tragic they are. Through it all though he continued to give performance after performance that constitutes some of the bravest and most moving work in cinematic history. While a handful of these post crash performances are fairly easy to find, two of the greatest have become near impossible to see in this country. This is a short celebration of them, and of the man who was just about the greatest actor American ever produced.
Elia Kazan hadn't made a film in nearly three years by the time his lovely and near forgotten masterpiece WILD RIVER came out on 1960. The film, the follow up to his searing and prophetic A FACE IN THE CROWD, tells the tale of a lonely Tennessee Valley field administrator who is sent to a small community to head the building of a dam on the river. The film would open up in the spring of 1960 to a surprisingly muted reception from the critics, and would quickly disappear from the public eye. It is a shame as WILD RIVER is one of the best films the legendary Kazan ever made and it contains one of the great performances of Montgomery Clift's career.

There is something so resonate and poetic in Clift's role as the timid Chuck Glover in WILD RIVER. Clift had never seemed so completely exposed and vulnerable before, and Kazan films his expressive damaged face and slight frame with some of the most delicate touches of his career. Monty is extraordinary throughout the picture's entire running time. From the early scenes where he arrives in the small town looking completely alien, to later in the film where he has to force himself to be strong in attempting to evict an old woman from her home when it is obviously the last the he wants to do. No one could play a damaged man like Clift, and his role as Glover suggests a man who has experienced a lifetime of disappointment, fear, hurt and pain.
WILD RIVER is filled with so many subtle low key masterful moments that it is frankly baffling as to why the film has remained out of circulation in America for so many years. Key to its success was the casting of a young Lee Remick, who compliments Clift so perfectly in this film that it is hard to think of a better screen pairing from the early sixties.
Everything about WILD RIVER is haunting in how authentic it feels. From the incredible score by the great Kenyon Hopkins to the on location photography of Ellsworth Fredericks, WILD RIVER remains one of the most distinguished little seen films from the sixties. It is also a timeless work that has aged much better than many more popular films from the period. With its low keyed style, beautiful direction by Kazan and monumentally moving performance by Montgomery Clift, WILD RIVER is near the top of the 'must get released on DVD soon' list.

After small, but brilliantly played and rightfully acclaimed roles, in THE MISFITS and JUDGEMENT AT NUREMBERG (both 1961), Clift returned to a leading role with one of his strangest and most audacious performances in John Huston's astonishing bio-pic FREUD (1962).
The much publicised behind the scenes traumas marred FREUD before it was even released to mostly empty theaters right before the Christmas of 1962. FREUD was unjustly neglected from the get go, but viewing it today shows it to be one of Huston's strongest and most unforgettable pictures. It is a resoundingly successful work that captures Clift in his last great performance, which is all the more remarkable due to the documented personal demons he was battling. 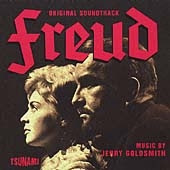 With its stark black and white photography and haunting Jerry Goldsmith score, FREUD focuses on just a few years of Freud's notable life, and yet it has the weight of the great screen biographies ever made. Like WILD RIVER, it seemed to disappear almost immediately and outside of a rare television showing or bootleg copy it is near impossible to see today in the states.
Ironically both Kazan and Huston would question Montgomery Clift's strange and challenging work in both films. Huston and the studio even sued him after the premiere of FREUD, an act which would make him virtually un-insurable afterwards. The tragedy of Montgomery Clift's last years shouldn't take away from the art he left us though, and his near forgotten late period performances in WILD RIVER and FREUD are among his finest.

While he was no longer the beautiful and exotic young creature who inhabited A PLACE IN THE SUN and FROM HERE TO ETERNITY, the diminished, broken and haunted Montgomery Clift of WILD RIVER and FREUD was no less majestic. Much like many of our great icons near the end, from Marilyn to Elvis, Clift at his most vulnerable was him at his most powerful. WILD RIVER and FREUD are major works in bad need of quality Region One DVD releases, they both deserve to be remembered as two of the great American films of the sixties.
at October 17, 2007

I agree on Wild River, one of my favorite movies and definitely much under appreciated for some reason. Not as sold on Clift in this movie as you are, he just seemed to fragile for the character he was playing.

that should be "too fragile" of course.

I haven't seen Freud, but it sounds fascinating and I'd love to some day.

As for Wild River... I love that film! It's one of Kazan and Clift's most under-appreciated efforts and I really can't understand why since it has some terrific stuff in it, including one of Monty's best performances in my opinion. The movie really needs to be released on Region-1 DVD. Kazan's work is treated with a lot of resentment now and frankly (politics aside) I think that's a shame. I enjoyed your write-up!

these are 2 of 5 of his that i haven't seen so i love that you wrote about them. I knew almost nothing about Wild River so now i'm excited to find it.

My favorite Clift performance is in another underrated Huston film, THE MISFITS. I remember that WILD RIVER, which is also a personal favorite of mine, used to show on television in the mid to late 1960s. I remember watching it when I was a kid a few times on TV. I remember also seeing FREUD on television in the late 60s. It never showed up again. Huston's 60s films tend to be underrated to a degree, I feel. I remember being impressed with Freud due to its visual style and performances. And you really believe he could be Freud. I remember the film's style remeinded me of Bergman or b&w Hitchcock. I can't remember anything else from it and will probably never see it again. It may have legal issues.

Thanks to you all for your comments....

To anonymous, tahnks for your thoughts. I know other people have mentioned that Clift is too fragile for the role but that is exactly the thing that makes it work so well for me. I really get the feeling that this guy is going through something major in his life to do this...his fragility works perfectly for me in the role, but I appreciate the differing opinion.

Thanks so much Kimberly,
Freud is really fascinating, I keep thinking a DVD release will happen eventually. So glad to hear that you admire Wild River. I love Kazan's films and hate that people can't accept him as a great artist and still disagree with some perhaps regretable life choices he made...

Thanks Nathaniel,
I appreciate you coming by and commenting. Glad you enjoyed the post and I hope you can see the films eventually...

Thanks also to Robert...I love The Misfits and Clift just destroys me in it. The scene in the phone booth is one of my all time favories. I think he is just brilliant in the film, and it is still incredible to watch him with Marilyn...love that film. Thank also for the thoughts on FReud, I do hope whatever is keeping it off the market gets resolved...

thanks again for all the nice comments

Great article on Monty Clift. What a fantastic actor. The man was brilliant. He did so many great films. I think quite a few of those films are underrated and underappreciated. I love both Wild River and The Misfits. Two amazing films with wonderful performances by Clift. Never seen Freud though, but it does sound quite interesting. Thanks for posting this blog.

Thanks Keith...it is so great to hear so much love for both THE MISFITS and WILD RIVER. They are two wonderful films in my eyes...I appreciate the comments.

Cool website, I hadn't come across mooninthegutter.blogspot.com before during my searches!
Continue the superb work!

I love Montgomery Clift in every movie he ever made and, like most of the others who responded, I am frustrated that I am unable to buy either Freud or Lonely Hearts on a DVD that will play in North America.