Celebrating The Crazed Chaos Of Gremlins

One of the main things I love about the films of Joe Dante is how much they love cinema. Dante’s best films are positively drunk on the idea of cinema, and it is this addiction to film that makes his work so damn timeless and so infectiously fun.
GREMLINS is a celebration of cinema and chaos, or perhaps more appropriately a celebration of chaos in cinema. For all of the potent sweetness of the first half of the film, GREMLINS really becomes transcendent in that second part where an incredibly potent anarchy takes over as Dante gleefully watches over his little creations as they tear the building down.
GREMLINS was co-produced by Steven Spielberg and written by Chris Columbus, two filmmakers who have tailor made many productions into custom made marketing schemes. For a while GREMLINS falls into this with its cute and cuddly Gizmo and ideal Americana aura, but Dante performs an interesting trick in the film and by the end of it, during a final Hammer Horror inspired climax, the young Turks have once again overtaken the corporate palace.

Dante shot GREMLINS just after completing his work on the Spielberg produced TWILIGHT ZONE film. The two seemed an odd combination; as it was Dante who after all had shot one of the most successful JAWS take offs, PIRANHA, just about six years before. GREMLINS would turn out to be a fruitful and incredibly successful venture for the two of them but thankfully Dante didn’t allow his film to become as neutered by the Spielberg touch as some other notable directors had. There might be some Steven Spielberg touches in GREMLINS but by the time the credits role, we know for sure we have watched a Joe Dante film.
Chris Columbus was a relative unknown at this time; with his only credit being the Daryl Hannah film RECKLESS in 1983. GREMLINS was a few years before he would turn to directing himself with such monumentally boring but financially successful films like the HOME ALONE series. His recent work on the HARRY POTTER films have thankfully served as a reminder of some of his talents, after all this is the guy who lensed the delightful Elisabeth Shue comedy ADVENTURES IN BABYSITTING.

I quite like Columbus’ script for GREMLINS with its strong odes to everything from IT’S A WONDERFUL LIFE, THE WIZARD OF OZ and even old CHARLIE CHAN serials. Still, it is Dante’s direction, the beautiful photography of John Hora, the wonderful special effects and the talented cast that really makes GREMLINS special. Add on a spirited score by the great Jerry Goldsmith as a cherry on top and GREMLINS is one of the most alive and inventive films of the eighties. 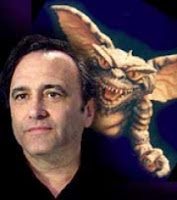 It is remarkable that GREMLINS was really only the forth full-length feature Dante had directed as he handles the material like a seasoned old pro. The film is a perfectly constructed piece that never slips. Any other director might have faltered halfway through when the most idealistic of all towns is suddenly taken over by the most gleefully destructive monsters in film history, but just like he had in PIRANHA and THE HOWLING, Dante intermingles the comedy with the horror perfectly. It is an assured and confident piece of filmmaking by a very talented artist.
The amazing number of references Dante fills GREMLINS with could have easily dismantled the film but they never interfere with the story, which is in itself a major accomplishment. Being a film geek, spotting all the references can be incredibly fun, but the film is good enough to not lose its identity in them. It finally even becomes a better film than some of the more acclaimed ones it is paying tribute to, a feat Dante has managed several times in his career. 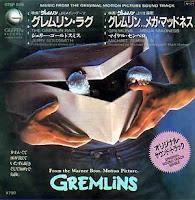 As previously mentioned, Goldsmith’s score is a charmer and the main theme is among his most memorable. The photography of Hora is really gorgeous and, even at its most artifical looking, the film still manages to maintain a level of realism thanks to his inventive lighting during the many nighttime scenes.
The cast is very well chosen with special note going to legendary Dick Miller who gives one of his most memorable and funniest performances as the paranoid Murray Futterman. Also extraordinary is Phoebe Cates who provides one of my favorite movie monologues ever in which she vividly details why she doesn’t celebrate Christmas. Hell, she is so good in the scene that it almost makes me believe there isn’t a Santa Claus.

The film’s second half in which the Gremlins hatch and take over the town is filled with some of the most delightfully crazed and over the top scenes Dante ever shot. He isn’t afraid to be ridiculous and it is that ridiculous nature that become positively transcending late in the film when a theater full of Gremlins suddenly start singing along to SNOW WHITE AND THE SEVEN DWARVES. It’s like a narcotic filled late night joyride that you might not believe in the morning if you manage to get to it.
GREMLINS was a fairly shocking film back in 1984. It was hugely popular but it probably single handedly gave birth to the PG-13 rating. The Gremlins themselves are joyously nasty little creatures and nearly a quarter of a century later I still think the special effects in this film hold up.
The film inspired a really fine and equally subversive sequel that came maybe a few years too late. My favorite moment in that one has the Gremlins actually charging into the projection room and destroying the film as you are watching it…genius. Still, I prefer the original as it works for me as a sweet and nostalgic Christmas film in the first half and a crazed monster movie in the second. THE HOWLING is probably the film I would name as Joe Dante’s best, but GREMLINS might be my favorite.

My look at another one of my favorite Dante films, HOLLYWOOD BOULEVARD, can be found here for anyone interested. GREMLINS and its sequel are both available on terrific special edition DVDS that serve both their anarchistic tendencies incredibly well.

What a great blog on one of my favorite movies growing up. Yeah, it does start off like one of those cutesy kiddie movies that
Spielberg and Columbus love making back then. Dante does a brilliant job from going from such a movie to one that is both funny and scary. That's not always an easy talk. This was always one of my favorite movies to watch at Christmas. I did love Phoebe's rant on why she disliked Christmas. This is a movie that I still love today.

Thanks Keith...me too. I never get tired of revisiting this film and it still feels incredibly fresh...