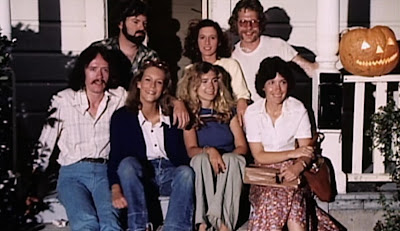 While it may be set in the fictional town of Haddonfield, Illinois (not to mention actually shot in California), John Carpenter's Halloween is to a lot of fans very much a Kentucky film.

I was only five years old when Halloween first hit theaters in October of 1978, so I was too young to see the film in its first run. I ended up seeing it for the first time around the age of ten courtesy of a TV broadcast and it had a huge impact on me. Never before had I felt so much glorious terror and it made horror my favorite genre, a fact that continues to this day. I have watched Halloween at least once every year since, making it one of the films I have seen the most, and those initial viewings still haunt my dreams and memories like no other.

It wasn't just the thrills the film supplied that had such a huge impact on me but it was the regional references that struck an emotional chord. Locations mentioned like Smiths Grove, Hardin County and Russellville were instantly recognizable to me, as they are to any native Kentuckian, and I was thrilled to find out that my Mom had actually attended school (they had one college class together) with John Carpenter in the late sixties. Halloween became not only one of my favorite films just before my teenage years, but also my favorite Kentucky film...and Carpenter became the living embodiment of someone who had got out but hadn't forgotten his roots.

The Kentucky references are scattered all over Carpenter films, especially The Fog, and they appear numerous times in the Carpenter scripted Halloween II. In fact there are two particular moments in the first Halloween sequel that really hit me location wise as one names an area I lived at as a child, and another pinpoints the street and corner where I lived at between 2006 and 2008. The obvious impact the state had on Carpenter (something he made clear last year when I saw him in person) is extremely resonate and quite haunting for someone like myself who knows this area so well and loves these films so much.

As a child and now I often daydream at school about Carpenter's film and the characters who occupied it, especially Laurie Strode. I would often wish to step back into the past and run into the very people who inspired these iconic characters, who know doubt Carpenter knew back in his days as a young man walking down the streets I walk down now everyday.

For those interested in some of the Kentucky locations mentioned in several of John Carpenter's films, please visit this Bowling Green, Kentucky site that offers up a 'driving' tour you can take.

Well said, my friend. This is definitely one of Carpenter's best and I had no idea how much autobiographical stuff he had put into it. Very interesting...

Keep that tribute rollin' on...

Thanks JD,
I appreciate that and hope you enjoy the upcoming posts throughout the month.

Great coverage so far, Jeremy. I'm loving all of the minutiae on this series, and can't wait to see what you have for us next.

Thanks for some fascinating background to this film.Look forward to following your work through the course of this month.

Hooray for HALLOWEEN! Hooray for John Carpenter! Gotta love it, and I look forward to more throughout the month!

That is really cool. I had never really thought about all of that. I always like it when writers, directors, etc. put a lot of references to their hometown or home state in their projects. It makes them come more alive, especially if you live in that area. I know I've always been thrilled when I hear references to places here in NC. I didn't see this movie until the mid-80's when we got our first VCR. I've been a big fan of it ever since.

While I've never been a huge fan of Halloween, I was struck by how geeky looking Jamie Lee Curtis was then and have to think this was a conscious decision on the part of John Carpenter and Debra Hill when they cast the picture. Nancy Loomis was much more gifted physically, but Curtis was goofier and smarter, and could act. She remains one of my favorite actresses and is the only reason I could possibly envy Christopher Guest.

Thanks everyone for the comments. I will have some more of the tribute appearing throughout the week...

It is a Kentucky Thing... I love it! Thanks for the link Jeremy, and remember, somebody's gonna win an autographed box set- might as well be you!

Thanks Marissa for stopping by, commenting and of course for running such a cool Carpenter related contest and site. I am glad to see him getting some love around here.