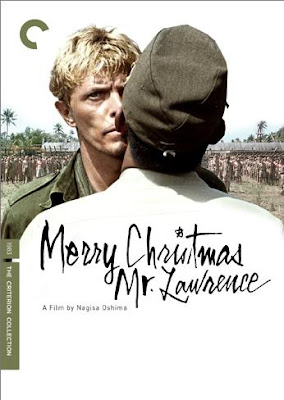 Just a quick note concerning the fact that Tuesday marks the release of Nagisa Oshima's Merry Christmas Mr. Lawrence on DVD and Blu-Ray from The Criterion Collection. This remarkable film starring David Bowie and Takeshi Kitano was unfairly critically maligned at the time of its release so this new release is an important one. Here are the Criterion's specs (taken from their site) for the discs:

The Oshima Gang, a 1983 making-of featurette

Hasten Slowly, an hour-long 1996 documentary about author Laurens van der Post, whose autobiographical novel was the basis for the film

PLUS: A booklet featuring an essay by film critic Chuck Stephens and reprinted interviews with director Nagisa Oshima and actor Takeshi Kitano
at September 26, 2010

It's been entirely too long since I've seen this film. I know the Criterion folk will do it justice. Thanks, Jeremy.

This is great news. A classic and so very moving. Shame Criterion regio lock their Blu's but I'm sure it will be a stunner.

Thanks guys,
I can't wait to get ahold of this disc. I appreciate the comments.

I watched it over the weekend for the first time. What an incredible film. Bowie's performance in it was astounding! The extras are pretty sweet too, esp. the vintage featurette from '83. Definitely worth a look.

Excellent,
Thanks for the report J.D.!