Something Dead Inside My Hole: Young Adult (2011) 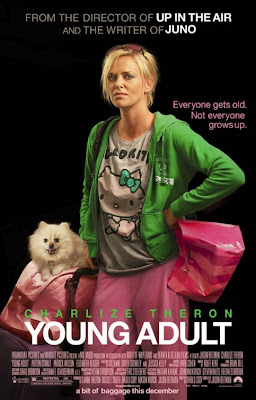 When I attempt to go home again all that awaits me is a great big hole. Let me explain...The only stretch of stability I had in my childhood was the period between sixth grade and graduating high school when I lived with my mom, and occasionally father, in a lovely two-story house next to the Ohio River in Newburgh, Indiana. Not all of the years there were good, most were probably bad, but in that seven year time frame I finally began to feel like I had a homebase, something I had never encountered before. When I graduated high school, and left for college, my parents moved back to Kentucky and the house was bought by a family who promptly had it picked-up and moved to a new location. So, when I try to go home again all I find is this lonely large hole in the ground...a hole that I often imagine leads further down than even I care to imagine.

I've been thinking a lot about that hole lately and it's become more than a little symbolic to me. As I am closing the corner on my fortieth birthday I am finding more and more that the anxiety and depression I have always had nagging at me is becoming more and more predominate and the only real solace I get is from my time with my wife and the music and movies that somehow never let me down. Most days I feel like that hole is getting larger and larger as I become blanker and blanker. I have successfully managed to cultivate a seemingly neutral every thing's okay persona but, secretly, I feel the pressure of 'too much' everyday....too much drink, too much debt, too much fear, too much rage...too many memories I would like to stop dwelling on. That hole has a lot of dark stuff in it and it has gotten so cluttered that I'm not even sure what I believe in anymore or even who I really am at this point.

Anyone reading might ask what any of this has to do with the new Diablo Cody scripted film Young Adult starring Charlize Theron, a work partially focused on a troubled 37 year old-writer named Mavis who returns to her hometown with the idea of getting an old flame back, despite the fact that he is married and has a newborn daughter. While most are viewing this film as a work about a truly despicable person that no one should care for, I found more of myself in Young Adult than any work I have seen in quite awhile. The cool, mostly silent, distress and rage that guides Theron's stunning performance was instantly recognizable to me and I felt like the film was holding, a sometimes hard to look at, mirror to me throughout. Of course, I can't completely speak as to Diablo Cody's intentions were with Young Adult, but I can say that while most of the audience around me was laughing at Charlize Theron in the film I was laughing with her.

Young Adult is the best film so far from Jason Reitman (a man who directed a film I loved, Juno, and one I didn't, Up in the Air). Reitman's direction here is beautifully understated, almost matter-of-fact, but his growth as a filmmmaker is quite remarkable. Diablo Cody's script for Young Adult is also the best work she has ever done and it captures something very honest and real about alcoholism and depression and it does so much better than most 'important' films on the subjects. The trailer for Young Adult sells Cody's smart and sneaky script way short. This isn't really a comedy about a selfish woman attempting to break up a marriage but is, instead, a devastating portrait of a horribly damaged person being sucked down a hole by a bored couple who view her sad life as a twisted reality show they secretly so much want to be a part of.

While Cody's script for Young Adult is quite incredible, the film is ultimately all about Charlize Theron's performance, which is an absolute force of nature. Theron has never been better and she captures Cody's fractured and tragic character with a stunning degree of authority and range. Theron's both funny and heartbreaking in the film and my recognition of many of her most despairing moments scared me but also made me feel not quite so alone. The film's final moment, featuring a haunting close-up of Theron, is both exhilarating and tragic and it's as brilliant and subtle of an ending as you'll find in any American film from the past decade. 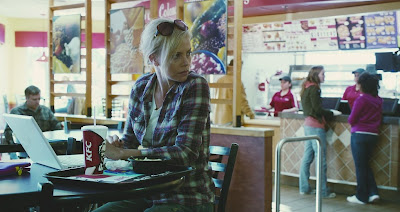 2012 is shaping up to be banner year for me with several publishing opportunities, a big move, new-job and more time with my lovely-wife but I can't shake this increasingly terrible emptiness. Perhaps I should use the upcoming year to stop running away from it and face it...to admit I am perhaps fucked, find some relief in that acknowledgement and then, finally, really do something about it.

Thanks for the review, Jeremy, one unlike the many we read because it ties a film to the experience and the personal feelings it evokes.

I think we all have a "hole" from our past we haven't looked into recently - or try not to. Some of us pretend the hole is shallow, or been filled in.

Keep posting, good luck on the new year, and we're always with you.

Thanks so much Roger for the nice comments and warm words of support. I greatly appreciate both and wish you the best for 2012as well. Thanks again!

Absolutely agree with Roger - just remember the numerous people you have touched with your blog posts over the years.

Thanks so much Colin for those very nice words. They mean a lot and I hope you have a great new year as well!

Loved reading these thoughts on this movie which also affected me greatly, more than anything the people involved have made yet. And I don't even want to get into why. Happy New Year to you, Jeremy.

Thanks so much Tony and Mr. Peel! This wasn't the easiest post for me to hit 'publish' on so your words really mean a lot. Thanks again and a great new year to you both!

Another stellar review, Jeremy as you remind me why I got in film blogging in the first place.

Hang in there, my friend. You certainly aren't alone judging by your healthy readership. I count you as one of my cyberspace friends!

Thanks so much JD. You are one of my oldest friends here and your kindness and support always mean a lot. Thanks again and all the best for 2012!