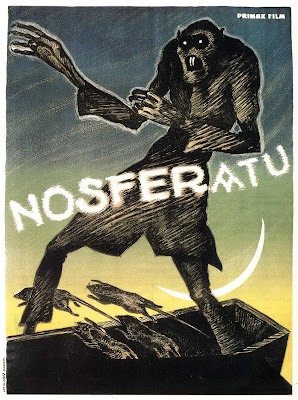 Released more than ninety years ago, F.W. Murnau's still horrify and absolutely brilliant 1922 film Nosferatu:  A Symphony of Horror remains one of the most transcendent, trailblazing and forward thinking horror films ever released.  It is so much more than a great horror film though, as its sharp political and social statements on themes ranging from class-separation, to how we interact with nature, make it one of the great political statements in all of film history.  Murnau is an absolute giant and Nosferatu resonates remarkably well all these decades later.
While it is the unforgettable Max Schreck that almost always comes first to mind when thinking of the original Nosferatu, the first image that always comes to my mind when I think of the film is a strangely eerie shot early on of a kitten.  While it seems random on first viewing, it is one of many instances in the film where Murnau returns to shots of animals.  A brilliantly edited work, Nosferatu is at its purest when Murnau intercuts these many shots of animals with the crazed visage of Schreck as the menacing vampire.  With this iconic character, Murnau suggests that it is his title 'monster' that is actually the closest to nature in the film.  The vampire is ultimately a much more organic being than almost any of the other characters, specifically the rich that Murnau justifiably savages through both humor and satire.  Nosferatu, like the creatures he dwells with, has been forced to fight for survival in a world catered to the rich, the inhumane and the inhuman.  He might very well be one of the "rats in the streets", as author Gerald Mast would write, but he is also very much that innocent kitten we see early on who is guided by an instinctual urge to hunt, eat and survive.

Murnau's distrust of the evil, weak, and ignorant, men of good fortune in the film can also be seen in the way that he treats the poor villagers.  Shown in shadow and left mostly nameless and faceless, a sly commentary on how they are treated in real life, it is the villagers who are ultimately right about Nosferatu.  It is their superstitions, and not the 'smarts' of the wealthy that turn out to be correct.   It is the wealthy's inability to accept the possibility that such an evil might come into their blessed and easy lives that brings Nosferatu to them.
It is indeed the well to do men of Nosferatu who Murnau holds up as the real villains.  This is especially seen in the case of the character Hutter, the stand in for Harker, who is a man who doesn't just pick a flower but kills it...a man who ultimately relies on the poor farmers he has always detested to save him from drowning late in the film.  Hutter is a man who has lived a life that has totally separated him from his natural surroundings and it takes a 'monster' to help him truly connect for probably the first time.

Powered by Murnau's stunning directorial styling, unique framing choices and wild editing (that really allows the audience an extra eye in every frame of the film), Nosferatu is one of a handful of masterful films that reside in true ground zero territory.  It is an astounding and haunting creation that stills feels ahead of its time.
If it comes down to one moment though then it is surely the iconic image of Schreck magically rising from his coffin.  A stunning testament to Murnau's skill behind the camera, this moment is still breathtaking to watch.  Schreck rises, his head slips partially out of frame (a touch that makes the moment all the more otherworldly) and we, the audience, stop breathing.  It's an odd and surprising moment that presents us with something truly odd, exotic and alien in the most cinematic way possible.
As the line goes in the film, "Nobody can escape his destiny"...just as cinema can ever escape the brilliant imposing shadow of F.W. Murnau.

***Nosferatu is now available on Blu-ray via a splendid 2 disc special edition set from Kino Lorber.  Read about the disc here and order it here.

I never thought about this film in that way before. Thanks for the great post!

Thank you very much!