I am very happy this morning to present the first guest post for Moon in the Gutter's Sofia Coppola tribute month.  John Levy is a fine filmmaker, a great cinephile and a friend so I am very honored that he has been kind enough to write up this fine tribute to Sofia's masterpiece Lost in Translation.  Hopefully some of you will remember the Q&A I did with John awhile back and I hope all of you will check out some of his own exceptional work after reading this piece.  Thanks again John for taking the time to write this! 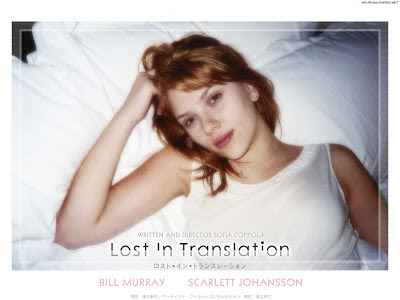 
There are many, many aspects I love about Sofia Coppola’s films. Two things in particular have to do with her subjects. One; Where most films put ordinary people in extraordinary situations, she puts some-what high profile people into extraordinarily ordinary situations. And two; The way she explores connection. Be it lost or found.
Like Antonioni, Sofia Coppola has a strong cinematic sense of spaces, isolation, dislocation, and loneliness. And the ability of portraying a romance of introspection and longing for connection with people as well as environment in individuals who are searching. So far (having not seen THE BLING RING yet), one, often more of these themes are present in all her work. It’s what draws me back to her time and time again.
I have a handful of go-to insomnia films I watch when I can’t sleep. They’re not films that put me to sleep, but rather films that comfort me when I cannot. LOST IN TRANSLATION is right at the top. And though grounded in a completely plausible and most certainly autobiographical reality, the first half of the film has a dreamlike quality. The brief title shot of Charlotte’s restless slumber, you fall right into like a jet-lag crash. Fading to black and into the dreamy ‘Death In Vegas’ track “Girls” as Bob Harris awakens in transit to the Tokyo night. The first act is like a sleepwalk. These two characters never sleep soundly again in the film until after they’ve made their connection and fallen in a respite of love with one another. After which point the rest of the film becomes an awakening. 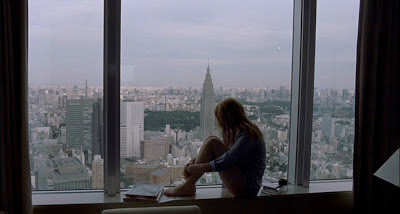 For all it’s humor, the film quietly tackles some difficult themes. Difficult to film and difficult to pull an audience into. It’s truth is internal. It cannot be expository. The film’s tagline ‘Everybody Wants To Be Found’ - Though almost generic sounding is one of few movie taglines that really does carry some weight in representing the film as well as remaining completely simple and universal to the audience. It’s easy to say Bob is just having a mid-life crisis and Charlotte is having a tough go at young adulthood and married life. But it’s not as much about how they’ve become lost to themselves, but rather like Charlotte says at one point, “I’m stuck”. They are lost among the world and their designated lives. Searching for a re-connect out windows, along crowded sidewalks and through Hotel hallways. As Bob says at one point jokingly, “Can you keep a secret? I’m organizing a prison break.” He in a sense is. Searching for comfort in hotel amenities and the prospect of sleep. And so is she. Watching, searching from her window. Her self help books. Her outings to temples and chants. Her calls back home. How do they break free of these designated identities and get back to themselves when they are a world away from home? With each other. And only such a fault in life’s design can occur in a Hotel Bar, in the middle of the night, in Tokyo Japan. Or a scenario of the sort. “I’m looking for an accomplice. Are you in or are you out?” “I’m in.” She replies. These two negatives form a positive unconditional alliance after their first drink together. And though challenges in a relationship will be faced, there is ultimately nothing they can say or do that is wrong. Bob wants the real Charlotte and Charlotte wants the real Bob. And this is their moment. Wabe Sabe and all. And they can be their best selves with each other in that place and time.

The moment this connection is solidified is during the scene in the karaoke suite. When Bob croons Roxy Music’s ‘More Than This’ directly to Charlotte, their eyes converse over the music. They open their hearts to one another. It reminds me of a scene in the 1951 film SEPTEMBER AFFAIR where Joseph Cotton and Joan Fontaine, two strangers sharing a space, a moment in time together in Naples, duck into a small cafe. They have been enjoying their short time together between flights without being fully aware how much. Sifting through some American records, they select one (September Song by Walter Huston) and drop a needle on it. And then it happens. The words exact the feeling between them. There is an emotional conversation taking place without dialogue. The words of the song say everything. The short precious time they have together. The strange land they find themselves in. They are at home with each other. They are themselves with each other. The past and the future cease. How this happened and where it is going doesn’t seem to matter. There’s nothing more than this moment. This brief and precious moment that must pass. The Karaoke scene in LOST IN TRANSLATION is exactly this same kind of moment. From Roxy Music to the shared cigarette in the hall, we watch two people slip into love. These moments are easily overlooked in both life and film. It’s deeper than carnal desire. It’s beyond surface. A soul attraction. A sense of being at home with a person. In their designated lives, Bob and Charlotte stop fitting in peoples “picture” of what they are supposed to be and they become distanced from the person they actually are after everything else - Career, social circle, even family are stripped away. They are kept around, involved, but they are an annoyance. They’re in the way. And yet they’re expected to participate in the constant refurnishing of their designated life. Who are they after all this? Where they live as well as where they travel are foreign lands where no one speaks their language anymore. They seemingly go unrecognized through life. But in some pocket of space and time - be it a Naples cafe, a curb side embrace, Hotel bar or a karaoke booth in Tokyo - they’re found again. They find that lost piece of themselves because the other shines a light on it. It’s as if they ended up with each others baggage because it looks similar. They recognize one another. And between them, not a goddamn thing is lost in translation.

This is beautiful, John.