The Destroyed Girl: Alain Robbe-Grillet's EDEN AND AFTER 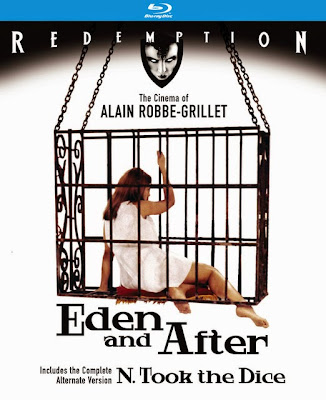 After years of being passed thru the hands of collectors via poor quality grey-market copies, one of the seventies greatest films has finally been granted an official home video release in The United States. Alain Robbe-Grillet's fourth feature film as a director, and his first color production, "L'éden et après" (Eden and After) can now finally be enjoyed by American audiences via a striking Blu-ray from Redemption and Kino Lorber. Mastered from the original 35mm elements, Redemption's new Blu-ray is absolutely dazzling and Robbe-Grillet's astonishing and bold use of color is serviced perfectly on this important new release. Robbe-Grillet admits on the thirty minute interview that graces the disc's supplements that he didn't have a script going into production of Eden and After and, astonishingly, the brilliant lead actress Catherine Jourdan was only brought on board three days before shooting began. The late Robbe-Grillet is still clearly haunted by the memory of the mesmerizing Jourdan during the interview and credits not only the success of the film to her but also states that the final film ultimately took its shockingly symmetrical shape around her. Born in France just a couple of weeks before Halloween in 1948, Catherine Jourdan was one of the most beguiling and puzzling performers who came out of the French New Wave. The great Jean-Pierre Melville was the first filmmaker to capture her haunting and unforgettable face in his 1967 masterpiece Le Samourai but appearing in such an auspicious debut did little to forward her career. Jourdan appeared in a few features throughout the late sixties but her film career was all but stagnate by the time she received a call from Alain Robbe-Grillet (who recalled a night dancing with her at a Parisian nightclub a year or so before) to appear in the new color production he was mounting. It is impossible to discuss Eden and After without focusing on the tour de force performance by the elusive Catherine Jourdan. She controls nearly every frame of the film and Robbe-Grillet's camera is clearly in love with her. Watching her performance today it is both baffling and troubling that she didn't have greater success after its release. While she appeared in a number of productions after Eden and After before her death in 2011, Jourdan was never again granted to the kind of role Robbe-Grillet granted her.
Eden and After is the most 'painterly' film in Robbe-Grillet's iconic body of work. He admitted as much to Anthony Fragola in The Erotic Dream Machine by stating that, "there exist many references to painting in Eden and After-in particular a live reproduction of a famous painting by Marcel Duchamp, Nude Descending a Staircase, No 2." Duchamp, doppelgangers and an unnerving mathematical sense of structure guide Eden and After. Inspired by the twelve-tone music of Schoenberg, Robbe-Grillet used a chart her created of, "twelve recognizable themes", instead of any kind of traditional script to create Eden and After. As in all of his films Robbe-Grillet delights in destroying any sense of traditional narrative structure in Eden and After and it stands as one of the most authentically dreamy and hallucinatory films ever made...the viewer slips down the druggy rabbit hole with Jourdan and you will either want to escape or never emerge again.
A lot of credit for Eden and After's success has to go to cinematographer Igor Luther, the great Czech artist who had previously worked with Robbe-Grillet on The Man Who Lies. Luther's use of color in Eden and After is never less than jaw dropping and the color red has never been quite as seductive and sinister as it is here. Robbe-Grillet told Fragola that he loved Red because it, "is the color of blood", and, "all my films shot in color involve blood...so it is the color red that interests me."
Eden and After, and its companion film N Took the Dice (also included on Redemption's new disc) stand as bold reminders to cinema's great visual power. Watching the film on this new disc reminded me of just how depressingly unimaginative most modern films are. Robbe-Grillet's films are a gob in the face to anyone who questions films place as great art. Pretentious? Absolutely and in the best possible way.
Redemption's new Blu-ray is light on extras and is missing the Tim Lucas commentary track and Catherine Robbe-Grillet found on the British release but having the stunning HD print alone is well worth the price of the disc. Eden and After stands as not only one of the great modern films but perhaps the most stunning example of Robbe-Grillet's unbelievably distinctive cinematic vision. It also stands as a great tribute to a young woman who should have had a more successful career as an actress. As Robbe-Grillet stated in The Erotic Dream Machine, Eden and After is ultimately the "story" of Catherine Jourdan, and what a endearing and profound tale that turned out to be. 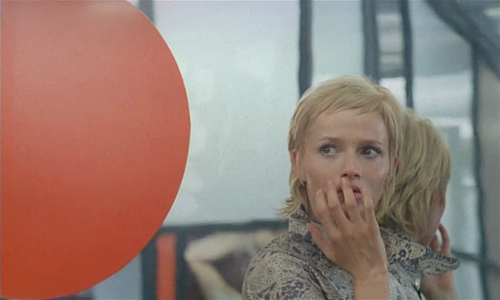 Email ThisBlogThis!Share to TwitterShare to FacebookShare to Pinterest
Labels: Catherine Jourdan, Eden and After, Robbe-Grillet, Writing on Film