A Week Beats A Year: In Tribute To Toshio Matsumoto and FUNERAL PARADE OF ROSES (1969)

We have lost yet another movie-making giant. Toshio Matsumoto, one of the great cinematic rebels and non-conformists, passed away this week at the age of 85. Matsumoto was a great artist and fierce boundary pusher who challenged his viewers as much as he enlightened and entertained them. For my own little tribute, here is a piece I wrote about his absolutely breathtaking 1969 work Funeral Parade Of Roses back in 2013. It's a film unlike any other and Toshio Matsumoto was a filmmaker like no other. 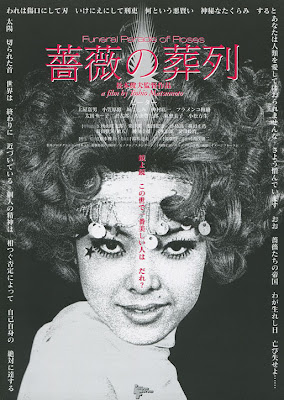 Thinking of Toshio Matsumoto's 1969 cinematic powerhouse Funeral Parade of Roses...a brick hurled through a window of complacency...a raging kick to the face of traditional narrative cinema...a retelling of Oedipus that transforms that classic legend into something altogether new.
The questions one gets asked after typically viewing a film are mute in regards to Funeral Parade of Roses.  "What's it about?" and "Did you like it?" have no place here and are like asking someone if they had 'fun' at a protest against oppression.
Product of its time?  YES but in the best way possible.  This has the kind of passion and anger that simply no longer exist in today's cinema.  We've traded soul and intensity for a day at the mall glued to small films on small screens that fit in our pockets.
The Plot of Funeral Parade of Roses doesn't hold my attention...instead it is the elements that it transcends in every frame that hits me (I beg for its punch time and time again).  Opening shot...blinding white light.  Is that a boy and a girl?  Boy and a boy?  Unclear until it pulls into focus and we are thrown into a labyrinth of confusion that questions gender, sexuality, family, life, death and beyond.
Relations?  Warhol, Morrissey...their deconstructive techniques are apparent.  Rollin's Rape of the Vampire is its bloody sister in arms from a year before.  Brakhage (sure), Deren (of course).  How about Kubrick, who loved Funeral Parade of Roses so much that he paid tribute to it stylistically and spiritually in his A Clockwork Orange a few years later.  Ultimately this is punk rock before the term was coined, exploited and made meaningless.  That brick through the window reflecting the student riots happening in Paris, Japan and all over the free thinking world in 1969.
The art of deconstruction....destruction of our scripted roles in life, love and death.  It's that final shot of Godard's Weekend with the ominous "End of Cinema" flashing on the screen taken several steps further.  It's a beautiful monster that no modern special effects house could muster.
It's a party film with a wild youthful abandon breaking through every moment...Superbad for the art house as a celebration of questioned gender roles and rampant unhinged sexuality.  And that ending has the kind of visceral impact only perhaps Deodato later stumbled upon.
It pops with an eye gouging intensity that builds and builds until a wonderful moment when an old man stumbles exhausted onto the screen and thanks everyone for attending.  Thank you and you are very welcome!  A little moment that could have derailed the film completely but this bold and audacious act is like the film itself...a joyous revolution turning a mirror back to the audience.  Toshio Matsumoto stating Lou Reed's "My Week Beats Your Year" in the purest cinematic way imaginable.


Funeral Parade of Roses remains unreleased on disc in The United States.  Region 2 imports are available.
at April 14, 2017