"The essence of THE DEAD ZONE is a lost love story...personally the movie's just like me, but filmically I suppose not."
-David Cronenberg, CRONENBERG ON CRONENBERG 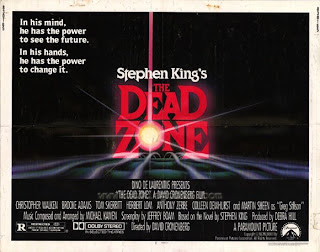 THE DEAD ZONE is not the best David Cronenberg film, but in many ways it is my favorite. I think this mostly has to do with the fact that it was the first one I ever discovered. I was ten when it came out and my parents took me to a small Henderson, Kentucky two screen theater to see it. The film left an indelible impression on me, and still more than twenty years later it continues to affect me even after probably a dozen or more viewings.
The film has always rested a bit in the middle in regards to Cronenberg's awe inspiring career. Shot just after the legendary VIDEODROME (1982) and just before THE FLY (1986), THE DEAD ZONE can't really be included in either the later or the mid period works of David Cronenberg. It occupies its own particular section of the great director's universe, and that fact alone makes it worthwhile. Add on that it is among the most resonate and haunting films he ever shot, and you have the very definition of an 'overlooked classic'.

THE DEAD ZONE was the first film Cronenberg ever shot that wasn't based on his own material. It had started out life as a successful 1980 Stephen King novel that still ranks among the great storytellers finest. Telling the tragic tale of Johnny Smith, a man who discovers that he can see into the future after being in a coma for five years, THE DEAD ZONE is a truly heartbreaking and emotional work that really does stand as one of the most human pieces that Cronenberg has ever delivered.
Starring Christopher Walken, in a career best performance, and a fine Brooke Adams as his lost love Sarah, THE DEAD ZONE is very much a love story but it is also something more. Key to understanding the film is to put yourself in Johnny's place. Imagine being at a content point in your life...you love your job, you are engaged and for all practical purposes you are happy. Now imagine an accident that takes it all away. Imagine losing five years of your life. 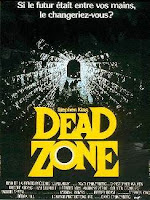 That five years is key to the film, and Walken portrays this man who literally was forced asleep to the world around him with a true power and emotional intensity. This is a performance that should have been celebrated as one of the best of the period, but like many great performances in horror related cinema it was mostly ignored and continues to be.
Watching the opening credits of THE DEAD ZONE, with its evocative New England photographs underneath the main title, one is struck by just how much of a David Cronenberg film this is. Typically thrown aside as somehow less Cronenbergian, names like Mark Irwin, Ronald Sanders, and Carol Spier will immediately leap out to fans of the Cronenberg universe during the opening credit scroll. In fact one of the only notable typical Cronenberg collaborators missing is composer Howard Shore, replaced here by Michael Kamen who ironically manages to turn in one of the best scores of any Cronenberg film.
Cronenberg's film was acclaimed at the time by some as being one of the most faithful King adaptations. In fact, as Cronenberg himself pointed out, much of the book was jettisoned. What Cronenberg does manage though is to stay thematically close to the original work, which is I think what a lot of critics and fans were picking up on. There is a real chilly, Northeastern wintry feel to much of King's finest novels, and Cronenberg nails that aura here. THE DEAD ZONE is one of the great winter films, with its many snow scenes and the brilliant icy photography of Irwin.
As Cronenberg noted, THE DEAD ZONE is very much a love story, but it is among the darkest possible. From the earliest scenes of Johnny's emotional reading of Poe's THE RAVEN to his bored English class, to the final moments of the film when he makes the ultimate sacrifice in order to stop a savage political messiah, Cronenberg sets his main character up as very much a classic tragic hero. His flaw which he overcomes, which in no small part causes his accident at the beginning, is not following his heart, and both Cronenberg and Walken allow this very complex and ultimately doomed man as much life as possible.

THE DEAD ZONE is of course a horror film as well, and it works splendidly as one. Cronenberg delivers a couple of his most horrific set pieces here, including a terrifying car accident and a unbelievable death sequence involving a pair of scissors. Also like the best Cronenberg films, THE DEAD ZONE is a strikingly subversive work. The second half of the film centering a power hungry politician, played with ferocious intensity by Martin Sheen, is one of the most political warnings Cronenberg has ever delivered. Keep in kind that this was just a few years after the Reagan assignation attempt, so the mere idea that Cronenberg would make a heroic film on a man who will be viewed as a crazed assassin was a very brave one. The Sheen character is even more relevant and frightening today, as more and more we as a public seem all too easily blinded by obvious political posturing, and less bothered than ever by outright lies.

Technically the film is superb to watch, and even fans who don't care for the film typically own up to this. The aforementioned photography by Irwin is gorgeous, and Spier's production design always seems possessed by genius. The framing and compositions of the film are clearly Cronenberg, and there is never a question as to who directed the film.
The film might not be as pure of a Cronenberg film as his more body horror productions like VIDEODROME and CRASH, but I think that there is a lot of the Canadian maverick in this film. Perhaps more that most of his fans have ever imagined. Regardless of how it fits in with the rest of his oeuvre, I will always rank THE DEAD ZONE in the top half of his finest productions.

THE DEAD ZONE opened up just before Halloween in 1983. It received the best reviews of a Stephen King adaptation since De Palma's CARRIE in 1976. It did decent business and made about double it's ten million dollar budget, but it wasn't the huge hit the studio had hoped for. It did manage though to make the name David Cronenberg more known by the general public and it led to his smash hit THE FLY just a couple of years later.
Cronenberg would win several festival awards for his work, but despite the amount of acclaim it garnered it has often been viewed as somewhat of a lesser film. I frankly always though Walken was robbed when he didn't get nominated for an Oscar that year, and I think it remains the best all around work the great actor ever delivered.

THE DEAD ZONE has never been out of print on the home video format. It was a VHS staple for years, before an okay laserdisc and then an early widescreen DVD. Late last year the film was re-released as a good special edition DVD which featured a new transfer (although I still think the film doesn't look as great as it should) and a handful of solid featurettes featuring the involvement of Cronenberg. Surprisingly the disc does not have a commentary with the eloquent director, which makes me suspect that the current special edition will not be the final word on this important work. There is also a Region 2 DVD featuring an audio commentary from author's Stephen Jones and Kim Newman that I hope to someday hear. I have also read this version of the disc includes some of the films deleted scenes in script format.

I will never get over that first viewing of THE DEAD ZONE a few months after I hit the first double digits of my young life. I remember sitting in that theater like it was just yesterday, and it is a work that continues to hit me emotionally like few other films do. I feel a great kinship to Johnny Smith in this film, and I am grateful to Stephen King, David Cronenberg and Christopher Walken for all realizing him so beautifully.
at December 02, 2007

I first saw this in a theater too and it scared the crap out of me! I was with friends, but they were all terrified too. It's such a great movie and Walken is so terrific in it. It has a sensitivity and human element that seems lacking in a lot of other films based on King's books in my opinion. There's also something deeply unnerving and eerie about the movie which is pure Cronenberg. Nice overview Jeremy!

Probably two reasons why it underperformed at the box office: (i) the combination of a wintry setting and Cronenberg's slighty detached, non-judgemental direction; (ii) other Stephen King adaptations by this point had all been grounded in very recognisable genre tropes; the monster in 'The Dead Zone', though, is all too human.

Thanks Kimberly for the personal memories. Sounds like we had a similar response. I am glad to hear you are a fan of the film as well...

thanks also Neil,
I think you have a very good point there. Thanks for commenting...

This is definitely one of the better adaptations from a Stephen King novel. What a chilling film this could be. Christopher Walken was outstanding in this film. I think he gives one of his finest performances here. I pretty much have enjoyed all of Cronenberg's films. I do think this tends to be one of the more realistic of King's works. That's what makes it more frightening. Great blog

I think this one got my vote in the survey. I'm not saying it's the best, but I saw it at a similar age as you did and I guess you could say I have a similar attachment to it, so I really appreciated what you wrote. Without even having seen it for a while, I'm suddenly sitting here and the Michael Kamen theme is going through my head. It was my first Cronenberg, my first Walken and probably my first King in a theater. It's a very moving film.

Thanks Keith...glad to hear you like the film as well, and I agree with you throughts on it...

Thanks also Mr. Peel.
I's nice to hear from some people who had some similiar experiences with it growing up...I appreciate the comments...

Great article, Jeremy. The Dead Zone would be the film I would recommend to anyone who had grown up in a religious household or in the Middle East and had never heard of Stephen King.

I think it took real imagination and balls to write a story about a political assassin who was the good guy. I agree that this may be Christopher Walken at his best. I've never given David Cronenberg's other work a real chance and don't know if I ever will, but I'm a big fan of what he did with this material.

I plan on writing about The Dead Zone in the coming months. Once again, I steal from the best!