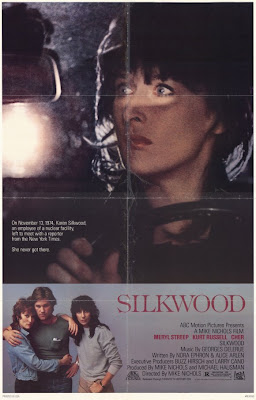 February proved to be the first month in as long as I can remember that I didn't go see any new films at the theater. There just wasn't any 2011 film that appealed to me enough to make me want to go out, buy a ticket and watch it.
I did manage to catch up with these twenty or so, new-to-me, pre-2011 films at home (Sofia Coppola's remarkable 2010 work Somewhere was the one film I caught on the big screen) and here are my quick thoughts on them.

2020 Texas Gladiators ***
This entertaining 1986 offering from Joe D’Amato is neither the best nor the worst of the many Italian post-apocalyptic films of the eighties, but it’s well worth watching for fans of the genre or D’Amato. Apparently partially directed by D’Amato regular George Eastman, 2020 Texas Gladiators is helped immeasurably by its cast of genre favorites, which includes Al Cliver, Sabrina Siani and Donald O’Brien. This is mostly low-rent D’Amato, and it’s the kind of film many will just be content to make fun of, but there’s a lot to love here for folks, like me, who love these films.

Best Worst Movie ****
Michael Stephenson’s engrossing look Claudio Fragasso’s infamous Troll 2 (1990) is a really fascinating and compulsively watchable work that surprised me at every turn. For the first hour, it is a rather nostalgic look back at a film that has garnered a major cult following, shown as the film’s star (Dentist George Hardy) travels with the film to sold-out Midnight showings across the country. Best Worst Movie turns surprisingly dark in its last half hour as Hardy’s apparent bitterness (his extremely callous and rude behavior at a particular horror convention was really hard for me to watch) becomes apparent. The film also makes for uncomfortable viewing when Fragasso, who is proud of the film, comes to American to find it loved the being 'the worst film ever made'.

Blue Rita ****
A startling Jess Franco film from 1977 starring Martine Flety and Pamela Stanford, Blue Rita is an extremely eccentric work from a director truly possessed by a mad genius. Short at just around 75 minutes and clearly shot on a barely there budget, Blue Rita still manages to be quite a mesmerizing work due to Franco’s cinematic touch, which is unlike any other around.

Dominique **1/2
Sometimes referred to as Dominique is Dead, Dominique is Michael Anderson’s 1980 chiller starring Cliff Robertson, Jean Simmons, Judy Geeson and Jenny Agutter. At times effective, the film finally feels more like a sluggish TV movie barely held together by a talented cast and a few sporadically interesting moments. In all fairness, I did have to watch the film via a horribly blurry full-frame copy that rendered certain sections so dark I could barely make out what was going on. I would be curious to see how much a good copy would help the film.

Hate Thy Neighbor **1/2
A so-so 1970 Italian western from the interesting director Ferdinando Baldi starring George Eastman among a few other familiar genre faces. Not so much a terrible film as just an average one, Hate Thy Neighbor is nowhere near as good as some of Baldi’s other westerns like the exciting Goodbye Texas (1967) and the supremely strange Blindman (1971). 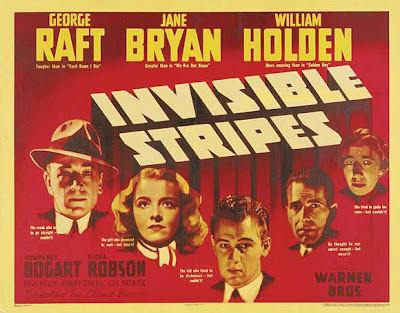 Invisible Stripes ***
Lloyd Bacon’s 1939 prison melodrama is helped immeasurable by its extraordinary cast which includes George Raft, William Holden and Humphrey Bogart. Bacon’s direction is not terribly exciting, and the screenplay by Warren Duff is fairly routine, but each one of the leads delivers stirring work and make the film never less than compelling. 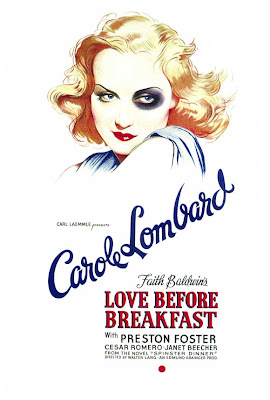 Love Before Breakfast ***
A low-key if charming 1936 Carole Lombard vehicle from director Walter Lang, Love Before Breakfast is a breezy comedy that doesn’t hold a candle to Lombard’s greatest films, but its provides enough entertainment value for a slight recommendation. Lang’s film would have been much stronger if he had given Carole better leading men, as neither Preston Foster nor Cesar Romero bring much to the table here.

Model Shop **1/2
Jacques Demy’s extremely strange, and oddly lifeless, English Language film from 1969, Model Shop is a partial follow-up to Demy’s much more successful 1961 film Lola. Featuring the entrancing Anouk Aimee reprising her role as Lola, Demy is more focused here on the directionless Gary Lockwood, whose character spends the majority of the films running time just driving around Los Angeles. Model Shop is gorgeous to look at, and the score from the rock group Spirit is great, but it’s finally just a not so successful look at the American youth culture of the late sixties and, much like its lead character, it is mostly misguided. 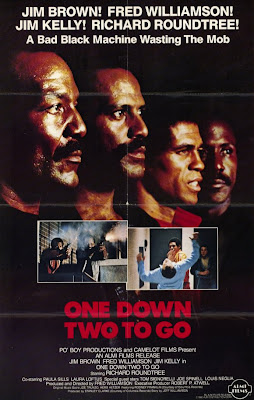 One Down Two to Go ***
If you think I am going to rank anything starring Fred Williamson, Jim Brown, Richard Roundtree, Jim Kelly AND Joe Spinell less that 3 stars then you’re crazy. Williamson writes and directs this 1982 feature that uses the world of kick-boxing as a backdrop to its rather by-the-numbers story of revenge and sticking it to the man. It’s nothing monumental, and it would have been better if it had been made about five years earlier, but it’s a lot of fun and it has a nonsensical final moment that has to be seen to be believed.

San Quentin ***
Another Lloyd Bacon film starring Humphrey Bogart that I liked this one slightly more than Invisible Stripes, if mostly due to the fact that one of my favorites, Ann Sheridan, is on hand. Like Invisible Stripes it is a fairly pedestrian work that only really sparks when Bogart and Sheridan are on the screen.

Silkwood ****1/2
I’m not sure why it took me so long to catch up with Silkwood, Mike Nichols chilling and wonderfully acted true-life tale from 1983. I certainly have had many chances in the past 28 plus years to watch it but I just recently finally sat down with for it with TCM’s recent screening. It’s a haunting and incredibly well acted work (I sometimes forget just how astonishing Meryl Streep can be) that really shook me up watching it. I won’t wait 28 years to watch it again…

Sleepy Head ***
My look at this Joe Sarno film can be found here for those interested.

Somewhere *****
Masterpiece. Sofia Coppola makes it a dazzling four for four with the stunning Somewhere, a brooding and meditative work that manages to recall films by both Michelangelo Antonioni and Vincent Gallo! Coppola’s work is all her own though and this lovely film offers up another reminder as to why she is one of the most valuable young voices in all of cinema. I can’t wait to revisit this work again and again when it hits Blu-Ray later this year. 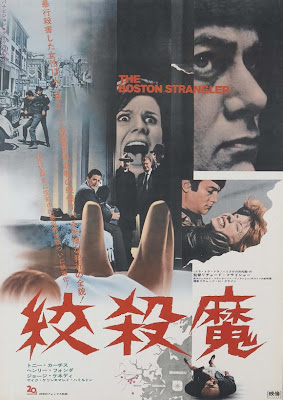 The Boston Strangler ****
Often criticized for being factually inaccurate, The Boston Strangler is still an undeniably powerful work from inventive director Richard Fleischer, who uses a lot of brutally effective split-screen work to tell this frightening tale of one of America’s most infamous serial killers. The whole cast is great but it is Tony Curtis, as Albert DeSalvo, who really wows here delivering a performance of startling power. He was robbed when he didn’t get at least a nomination for this film.

The Dynamite Brothers **1/2
It would be easy to pick apart this cheesy little Al Adamson feature from 1974 but it supplies enough goofy and energetic fun to keep to keep it watchable, plus it has Carol Speed in it so you know it’s not all that bad. The soundtrack from Charles Earland, which is what led me to the film, is honestly the best part and it is pretty kickass.

The Fighting Fists of Shanghai Joe ***1/2
Mario Caiano’s extremely enjoyable genre-mixing romp from 1974 features a terrific Chen Lee as the title character along with Klaus Kinski, Carla Mancini, Giacomo Rossi-Stuart and Carla Romanelli in supporting roles. The film’s a blast, Caiano’s direction is energetic and the score from Bruno Nicolai is out of sight.

The Fish That Saved Pittsburgh ***
One of the main inspirations for Will Ferrell’s woefully undervalued Semi-Pro from a few years back, The Fish That Saved Pittsburgh (which I caught part of years ago) is an endearing, if overlong, production that is hard to dislike even though it finally isn’t as good as it could have been. Here’s a bit of trivia for you, Dawn of the Dead star Ken Foree is listed over at the IMDB as an uncredited Pittsburgh Python Player!

The Passions of Carol ***1/2
My look at this fascinating Shaun Costello film can be found here. 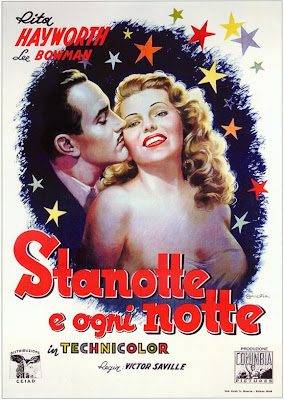 Tonight and Every Night ***
I’ll be the first to admit that I am not a big fan of Musicals. I am a big fan of Rita Hayworth though, which is mostly why I gave this Victor Saville WW11 songfest a go. While I wasn’t blown away by it, I did enjoy Rita’s performance and there is no arguing with the songwriting Cahn and Styne. I also appreciated how strange some of the musical sequences were and that the film didn’t have the stock ending I expected. My appreciation for the film was ultimately marred by a lame write-in character of a priest, not in the original play, that the studio wrote in but, all in all, this is a pretty good (and great looking) little film.

Zombie Strippers ****1/2
Jay Lee’s fabulous gory satire is a truly inventive and intelligent work that I wish I would have seen in the theater. Featuring a go for broke performance by Jenna Jameson and a hilariously self-referential turn from Robert Englund, Zombie Strippers is equal parts Lucio Fulci, Bertolt Brecht and Russ Meyer and it’s a marvelous DIY-spirited work from Lee (and his crew). I have to say as well that I would love a spin-off film featuring lovely Laura Bach’s ass-kicking, zombie-crushing Sassy Sue as soon as possible please.
at February 28, 2011

Oh, The Boston Strangler. Curtis both scared the hell out of me and left me speechless. That final scene alone had me going, "Wow."

(BTW, if it's worth anything, he got a Golden Globe nomination for it.)

Thanks MovieNut,
Yea that last shot of the film is really chilling. Good to know he at least got a Golden Globe nom! Thanks for commenting...