"Just because people throw it out and don't have any use for it, doesn't mean it's garbage." 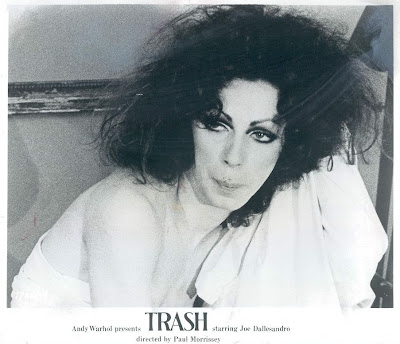 Two years before being immortalized in Lou Reed's classic "Walk on the Wild Side", Holly Woodlawn gave one of the defining performances of the seventies in Paul Morrissey's stunning Trash (1970).  Appearing alongside beautiful Joe Dallesandro, Woodlawn is absolutely amazing in the film and gives one of the most endearing, original and moving performances I have ever seen.

The Puerto Rican born Woodlawn had amazingly never appeared in a feature-length film before Trash, a fact which makes the performance all the more amazing.  The experience Woodlawn had gathered on the stage in the late sixties informed the performance in Trash and the authority and command of the screen Woodlawn shows is quite remarkable.  Legend has it that Woodlawn's role was initially much smaller but Morrissey was so blown away by Holly's talent that he expanded it into a leading part.

Holly Woodlawn manages to be funny, tragic and consistently brilliant in Trash. Legendary filmmaker George Cukor was in fact so moved by Woodlawn's performance that he started a campaign to get a Best Actress nomination but, sadly, it wasn't meant to be. It was the Academy's major oversight though as Woodlawn's performance in the film is among the best I have ever seen. Trash garnered a lot of justified critical acclaim upon its release and it remains one of the best and most defining films of the seventies. For me personally  Trash stands as one of the great examples of how truly life altering (and affirming) a film can be. We would be blessed to have more films this honest and raw in our theaters today.

More information on the life and career of the fabulous Holly Woodlawn can be found here.